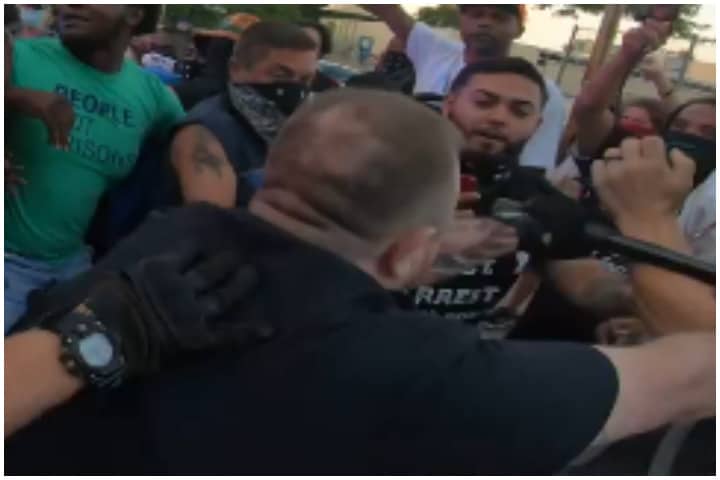 The Wauwatosa mayor rescinded limits on protesting after 8 p.m., the day after imposing the new protest rule, as videos captured Black Lives Matter demonstrators fighting with police in the streets. You can watch some of the videos throughout this story.

“Mayor McBride’s August 13 statement was revised on August 14 with two changes,” an update to Dennis McBride’s statement says. “One, the revision makes it more clear that picketing is not permitted at individual private residences. Two, the statement removes the protest hours of 12:00 pm to 8:00 pm.” (Tell us what you think of the mayor’s action in the comment thread.)

The protest rules of the Wauwatosa mayor, which also limited protests at private residences and required permits for some protests, came after disorder erupted at the home of suspended Officer Joseph Mensah, who says he and his girlfriend were shot at and assaulted. According to WISN-TV, demonstrators showed up at the mayor’s house on the evening of Aug. 14. The mayor rescinded the 8 p.m. protest limit that day after the American Civil Liberties Union released a statement condemning it, WISN-TV reported.

Since @WISN12News apparently doesn't want you to see "Drew" the #BLM protester resisting arrest before being tackled or @RepBrostoff interfering with the arrest and harassing police – here's the full clip. #WIright @tcot pic.twitter.com/ibn3BG8BNY

Wauwatosa police confirmed they had made an arrest.

“Tonight, there was protest in a residential neighborhood on the east side of the city. The City of Wauwatosa and the Police Department value the right to peacefully protest in public areas but picketing at a private residence or blocking streets is not permitted,” Wauwatosa police wrote on Facebook on the evening of August 14.

According to Wauwatosa police, “While police were enacting an arrest, officers were confronted by protesters. The protestors attempted to prevent the arrest by physically engaging officers and blocking off routes, preventing squads from leaving. Neighboring law enforcement agencies responded to a mutual aid request.”

Facebook videos give a sense of what went down in Wauwatosa that night. One of the two videos was posted to The People’s Revolution page on August 14, the same day the mayor removed the 8 p.m. protest limit. The second was posted to a Facebook page critical of Wauwatosa police.

A comment writer wrote on the thread of the man who posted the above video, “Don’t push a cop, simple as that. Can’t handle the heat stay out of the kitchen. I bet any money if someone pushed you, you would push them back.” He was roundly criticized by other commenters, including one who wrote, “no one asked for your awful opinion.”

Democratic Rep. Jonathan Brostoff posted a lengthy video to his Facebook page. He wrote on Facebook that the video makes “a great case for defunding the police due to their actions.” Brostoff, whose Facebook page is filled with support for Black Lives Matter and protests, also criticized what he labeled the “right wing propaganda machine.”

Another video starts with a man being taken into custody and shows bystanders hurling verbal abuse at police. “You guys are a piece of sh*t. Racist as* cops. That’s why we’re marching. You motherf*ckers are racist as a sh*t…piece of sh*t, KKK,” a woman shouted at officers. Another man shouted, “F*ggot as* cops, f*ck you all. A bunch of b*tches.”

The police statement says that the arrested man, who was not named, will be “referred to the Milwaukee County District Attorney’s Office for charging with regard to his involvement in numerous incidents over the past few days. A second arrest was made for trespassing; the subject was cited and released. Understanding that tensions are high, the department remains committed to serving the community. We will continue to evaluate incidents as they occur, prioritizing life and property.”

Not surprisingly, most Wauwatosa police officers are now looking to find jobs elsewhere, according to Fox 6, which said a union poll found that “94% of union members would not encourage someone to apply for employment with the Wauwatosa Police Department, and 81% said they’re considering employment elsewhere, or retirement.” The union blamed “failed political leadership,” and the ramifications of “politically motivated action that ignores the facts and denies due process,” according to Fox 6. You can watch the union’s press conference above.