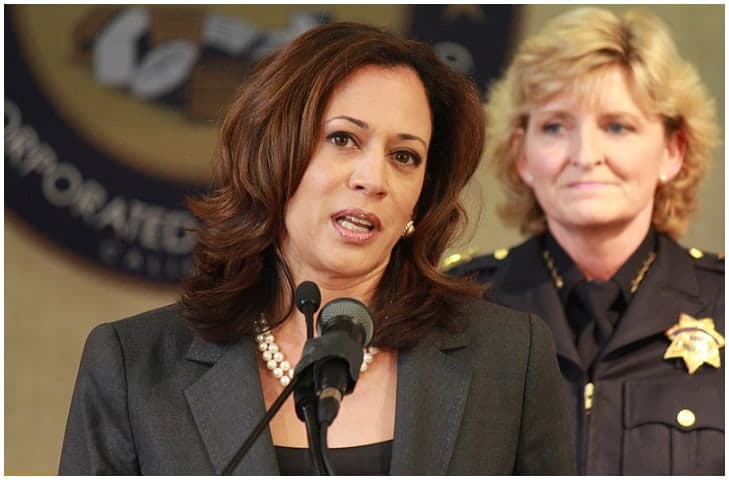 Is Kamala Harris the most liberal U.S. Senator? Is it true? According to a recent ranking, yes. In an Aug. 12 interview, President Donald Trump said that he believes U.S. Sen. Kamala Harris is a “disaster. She is going to be a disaster I think for their party.”

Harris, he claimed, is “super liberal. I heard she is the most liberal person in Congress. More liberal than Bernie Sanders.” Trump added, “I have to win the election because Kamala is a socialist.” Of former vice president Joe Biden, who recently chose the California senator as his running mate, Trump said, “He’s been brought over. I guess he’s a socialist, I guess if you asked him what a socialist means, he wouldn’t give you an answer. He has no clue.”

Is Trump right? Is Joe Biden’s vice presidential pick the most liberal person in Congress?

She is, according to GovTrack.us. The site publishes ideology rankings of U.S. Senators. In 2019, it listed Harris dead last of 100 Senators, meaning she was ranked the most liberal. In contrast, Sanders was the second most liberal senator.

It’s not just that site that scores Harris liberal. According to The Sacramento Bee, “Americans for Democratic Action, a liberal advocacy group that compiles ratings based on major votes, gave her perfect scores in 2017 and 2018.” The Bee added, “Harris voted the group’s way last year on key votes every time she was present.” She had an 80% ranking score in 2019.

GovTrack.us, wrote, “Our ideology score placed Kamala Harris as the most liberal senator in 2019; what kinds of bills has she introduced?” You can read their analysis here. Among bills that gave her the ranking: support for federal marijuana legalization, supporting a rent relief tax credit, including a question on gender identity and sexual orientation on the U.S. Census form, giving immigrants in the country illegally the right to a lawyer when detained.

According to Business Insider, along with Sanders and Sen. Ed Markey, Harris has advocated sending every American $2,000 a month in stimulus checks, a plan that a conservative economist estimated would cost $6 trillion. Harris’s press release says her plan would give people the $2,000 for three months after the pandemic ends too and doesn’t require a social security number. The plan would be “retroactive to March,” her press release says.

GovTrack.us calls itself “a completely independent entity which is wholly owned by its operator and receives no funding in any form from outside organizations. We have no financers, sponsors, investors, or partners, nor do we have any affiliation or relationship (financial or otherwise) with any political party, government agency, or any other outside group or persons.”

The GovTrack site explains, “Our unique ideology analysis assigns a score to Members of Congress according to their legislative behavior by how similar the pattern of bills and resolutions they cosponsor are to other Members of Congress. The score can be interpreted as a conservative—liberal scale, although of course it only takes into account a small aspect of reality.”

The Washington Post noted that the GovTrack rankings, which study legislation, are just “one way to measure a lawmaker’s ideology.” If you look back over five years, according to The Post, Harris was “still among the most liberal senators by this marker. But Sanders and a few others are more so.”

The Post claimed, “When you look at Harris more holistically than the legislation she’s co-sponsored, it doesn’t make sense to call her the most liberal senator.” Read their take here. The Bee notes that Harris’s record before she joined the Senate – as a prosecutor – upset Democrats.

EXCLUSIVE – Eric Bolling goes one-on-one with the Commander in Chief, President Donald Trump. Watch as the President weighs in on Kamala Harris, Socialism in America, the economy, Portland, College football, and more. https://nbcmontana.com/news/america-this-week-w-eric-bolling

“She is a disaster. She is going to be a disaster I think for their party…” Trump said in the interview, which he gave to talk show host Eric Bolling.

He said she was down to 2% or less support when she ran for president. “She wants no fracking. That kills Pennsylvania. It kills Texas… it kills our country because we will be paying three or four times more for electricity… She wants to raise your taxes, she wants to increase regulations,” he said.

Bolling told Trump that Harris once compared ICE agents to the KKK (Fox News reported that, in 2018, Harris asked a nominee to lead ICE if he was “aware of the perception” that there were similarities between ICE and the KKK.

Trump then referenced crime increases in New York City and Chicago and Portland, “where you have anarchists. These are all Democratic-run cities. If Biden would win, our entire country would be like that.” Trump said the country would see a “stock market crash like you’ve never seen before,” and people’s 401Ks would become “worthless.”

He added: The “Mayor of Portland is a horror show. He thinks he’s friends with these people. This is a liberal ideology like probably Venezuela… they wouldn’t mind having the whole country like Portland, they’re all liberally run for decades, for years, many years. Republican-run cities are doing better than they ever have before. This is what they want the whole country to be.”

Of Harris, he claimed “she was the nastiest of anybody in the Senate, the worst, meanest person to Judge Kavanaugh… I’ve never seen anything like that, she was worse than anyone else. I think people will fall out of love with her very quickly.”

He added of her time as a presidential candidate, “Every time people heard her open her mouth she went down.” Trump told Bolling that he had complete confidence in Vice President Mike Pence.