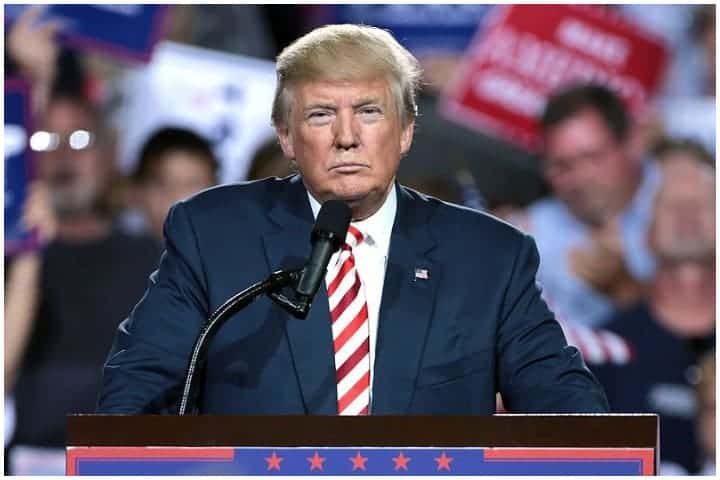 President Donald Trump brought his populist message to Freeland Thursday night with a wide-ranging speech in which he campaigned on his past accomplishments and made promises for his second term if voters grant him the opportunity.

Before a throng of avid supporters gathered at MBS airport, Trump said the United States had enjoyed record prosperity before it was put on pause by what he alternately referred to as “the China virus” and “the China plague,” meaning the novel coronavirus that originated in China late last year.

Claiming the United States had been the “greatest economy in the history of the world” until the pandemic prompted mass unemployment and the lockdown of the nation’s economies, Trump proclaimed “the future belongs to America, not China.”

The economic indicators Trump highlighted from his first term included the building of automotive plants in the Midwest.

“I got you so many damned car plants,” he said.

Other successes Trump referenced were renegotiating such trade deals as NAFTA and TPP, and passing the United States, Mexico and Canada Agreement (USMCA), calling to attention Biden’s apparent error earlier in the day in a CNN interview.

In a conversation with CNN’s Jake Tapper, Biden was asked which deal the candidate preferred, NAFTA or USMCA, and Biden stated USMCA.

“He was right, but he didn’t know it,” Trump said.

He warned that Biden, if elected, would implement $4 trillion in tax hikes, ban energy production, confiscate guns, and open up the nation’s borders.

“No major party has had a candidate so extreme,” he stated, adding the Democratic Party was “waging war against the middle class.”

Vice Presidential candidate Kamala Harris also took heat from Trump. The presidential incumbent noted the California senator was “the most liberal person in the U.S. Senate.”

Trump goaded Whitmer to allow Big Ten football to resume, and compared her to U.S. Speaker of the House Nancy Pelosi by calling her “a liberal hypocrite,” referring to Whitmer’s husband attempting to skirt lockdown orders to get his boat in the water by Memorial Day weekend.

He also poked fun at Peters. Saying he knew every U.S. Senator, Trump claimed of Peters “I don’t know this guy” and jibed, “He doesn’t do anything.”

As evidence, he presented the $300 million that has been pledged to the Great Lakes Restoration Project, the $75 million pledged to renovate the Soo Locks, and the $43 million promised to mid-Michigan for flood disaster relief after last May’s floods and dam failures.

Addressing Bob Woodward’s claims that Trump intentionally downplayed the threat of the COVID-19 virus, the president noted he had taken a page out of Winston Churchill’s playbook by following the British adage: “Keep calm and carry on.”

Among Trump’s promises for a second term were placing the first woman on the moon and first astronaut on Mars. Closer to Earth, he pledged school choice for every family in America and to defend the dignity of work and the sanctity of life. Additionally, he promised to grow American wages, and return the nation to the full employment and record prosperity it enjoyed before the pandemic.

He also said at the beginning of the New Year, Americans will be granted increased medical pricing transparency and reduced health insurance premiums.