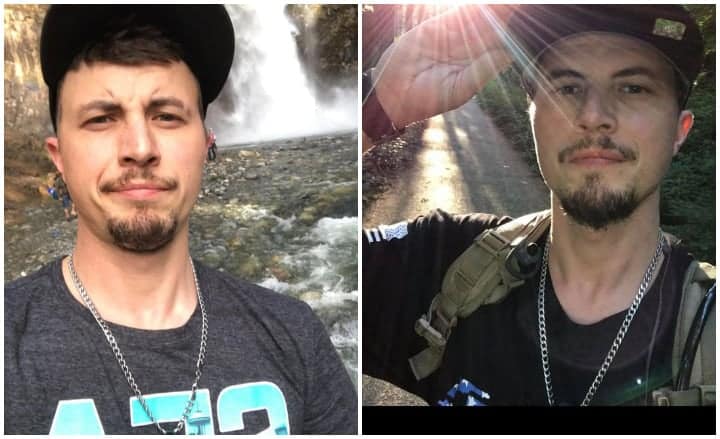 Jeffrey Acord, BLM activist and an arson suspect in Washington State, is accused of live streaming on Facebook before authorities say he set an arson fire. According to The News Tribune, Trooper Ryan Burke said: “The guy was live streaming (on Facebook) like he found the fire. He was trying to make it look like he didn’t do it.” You can watch the video below.

Three months ago, Acord streamed a video showing him at what he called a “Seattle, WaBLM protest / march.” Someone asked if he was leading the BLM march, and he responded, “Yep.” In 2014, Jeffrey Acord was accused of being “caught with a cache of weapons, ammunition, and explosive materials in his backpack and vehicle during the Ferguson decision protests in Seattle,” according to KOMO News.

The News Tribune reported that Jeffrey Acord was accused “of starting a brush fire on state Route 167 in Puyallup” and authorities say he committed a new crime after being released from jail. He’s been charged with second-degree arson for a fire “that burned nearly two acres in the Route 167 median near North Meridian,” the newspaper reported. According to King5, he is accused of breaking into a gas station shortly after being released on bail. Some people have spelled the suspect’s name Jeffrey Accord, but it’s spelled Jeffrey Acord.

The arrest comes as authorities identify suspects in arson fires all over the country. They pushed back at rumors that Antifa was behind a series of fires, though.

Trooper Ryan Burke wrote on Twitter, “Joint team effort!! WSP, Fife Pd and Puyallup PD just arrested a 36yr old Puyallup resident. He was caught in the median on SR-167@ Meridian setting a fire! He is currently on his way to jail! Great job everybody! #playstupidgames.”

Pierce County has a great team of law enforcement in this county serving all citizens in our county from many different agencies. We are happy to be a part of the team! This was a great arrest today! @wspd1pio @FifePD #proudofblue https://t.co/wj0PeUutdr

In the Video, Jeffrey Acord, BLM Activist, Says He Called the Fire in to Police

In the video, Jeffrey Acord says things like, “I’m here with the police. They’re talking to me about it because I just called it in and that’s when they seen me pulling off.”

The video shows smoke in the background. On Facebook, Jeffrey Acord goes by the name Jeff Demologik Acord. He says that he lives in Covington, Washington, is from Renton, Washington, and is single. His page includes accounts on Twitch, Snapchat, and Soundcloud. He only has 16 followers on Twitch, though.

He wrote in one recent post, “Lost my camera bag on the way from Puyallup to Bellevue a couple hours ago. Possibility around kent on hwy 167.”

In August, he wrote, “…sincerely hope that I find clarity and security in every aspect of my life soon. Been getting a lot of static through the universe lately and could really benefit from making sense of the deeper meaning behind it all and how it pertains to my overall status and place amongst the waves of energy and vibes that I possess for my passions and aspirations and goals.”

“Ultimately it was determined is that they had probable cause to believe that gentleman had started that fire,” said Captain Jason Visnaw with Puyallup Police to King5.

Here’s Acord at a march.