Christopher Eagle, a former Florida Congressional candidate, is drawing outrage regarding comments made on his personal Facebook page about the ambush shooting of two Los Angeles County Sheriff’s deputies.

The original post was deleted, however not before screenshots were taken of the post, which spread across social media. The screenshot shows a picture of the gunman, which was released by the Sheriff’s Department, and reads:

Where is the video of what happened before this? I don’t think we should prejudge this without full context. We can’t rely solely on edited video that only shows the shooting. You may just be releasing the clip to inflame the public. How do we know it wasn’t justified? 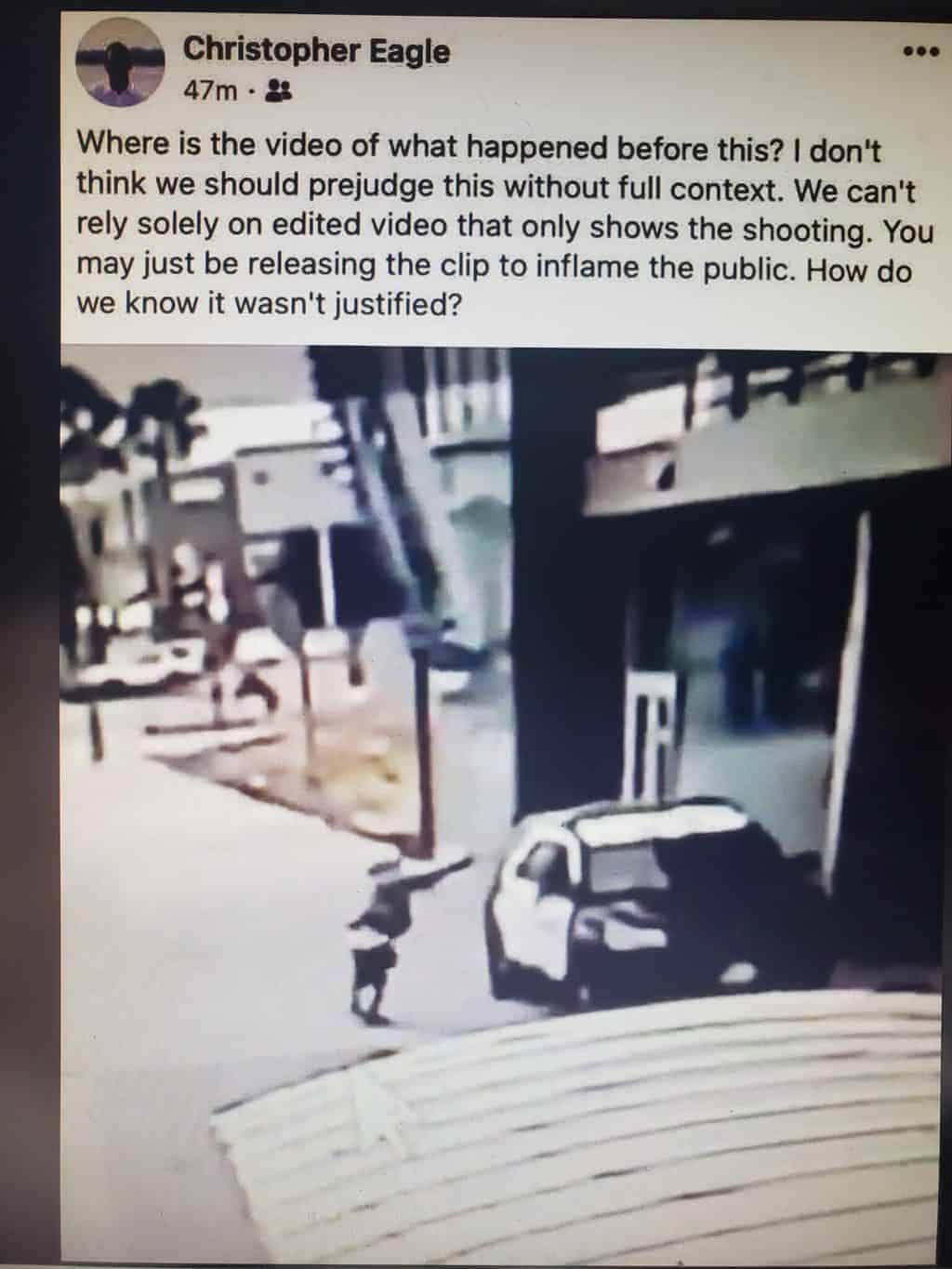 On his profile picture, which was flooded with over 1,000 comments regarding his post, Eagle defended himself by responding:

“Show me where I said it’s ok to shoot anyone? You won’t find it. I posed the same statements that are made by the Police every time there is a video of the Police shooting a person. Just like this one.”

He then shared video of a Minnesota police shooting.

There were well over 1,000 comments posted on his Facebook page within a few hours; most are not able to be quoted here.

Who is Christopher Eagle?

Christopher Eagle ran as an independent for the U.S. House to represent Florida’s 4th Congressional District.

He told Ballotpedia, “I have spent my career innovating and rebuilding businesses around the world.”

According to Ballotpedia, “He withdrew before the general election on November 3, 2020,”

The blog Clean Up City of St. Augustine alleged that Christopher Allan Eagle was convicted of a misdemeanor embezzlement charge in Michigan. “Congressional candidate Christopher Eagle contends he served time in jail for a crime he did not commit,”

The blog includes an email from his lawyer explaining: “Christopher Eagle was not convicted of a felony in Calhoun County, Michigan. He was convicted of a misdemeanor. Simple due diligence and understanding of a court system leads one to that fact.”

Joe Biden’s speech tonight will either be a redeeming moment or a continuation of the gaffes.

The Los Angeles County Sheriff’s Department wrote on Twitter that the two deputies were shot in Compton and taken to the hospital, where they “are both still fighting for their lives, so please keep them in your thoughts and prayers.”

They wrote that the two deputies “were ambushed as they sat in their patrol vehicle. Both sustained multiple gunshot wounds and are in critical condition. They are both currently undergoing surgery. The suspect is still at large.” The motive has not been released but the department said the shooting was completely unprovoked.

According to CBS News, the male deputy is 24, and the female deputy is 31 and a mother. The suspect has been described by authorities as a dark-skinned male, between the age of 28-30, wearing dark clothing

Print
Facebook
Twitter
Linkedin
Email
Tumblr
Previous articleBLM Hospital Protest Video: ‘We Hope They Die’ Shouted After Officer Ambush
Next articleUW-La Crosse Suspends In-person Classes, Locks Down Campus
Jim Piwowarczykhttps://www.wisconsinrightnow.com/
Jim Piwowarczyk is an investigative journalist and co-founder of Wisconsin Right Now. Married with 3 kids, a chocolate lab, and a german shepherd. Jim served as a police officer in Wisconsin for more than 20 years. His career started as a police officer in Milwaukee County in 1994 as a patrol officer, until he was promoted to patrol sergeant in 2003 where he worked until he left in 2009 to pursue business aspirations. Jim Piwowarczyk was a field training officer, evidence technician & hostage negotiator and conducted many drug investigations. Jim continued to work part-time for an area police department. Jim is avid real estate investor, and small business owner & developer. Jim has coached youth football and basketball. Jim is also an avid fisherman and hunter.