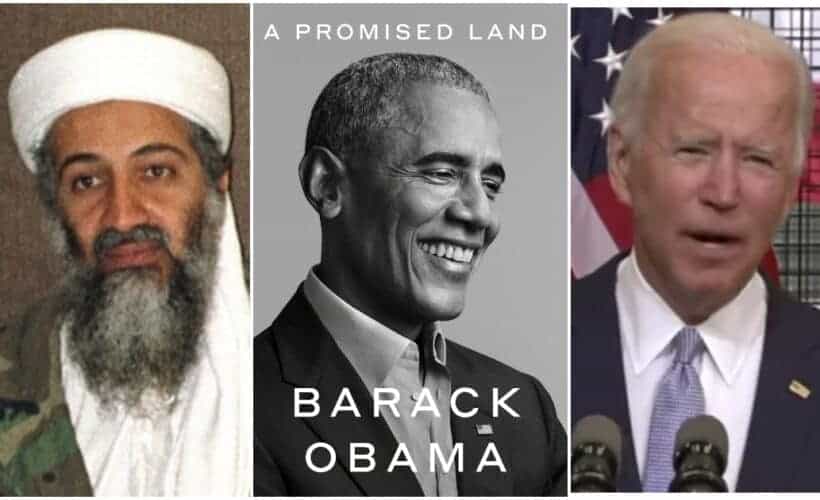 Joe Biden opposed the successful raid to get Osama bin Laden, former President Barack Obama has revealed in his new book, according to the Guardian.

The British newspaper reported Obama made the revelation in his new book, A Promised Land.

“Joe weighed in against the raid,” Obama wrote.

Obama disregarded the advice of his vice president and the 2011 raid took out the terrorist leader who masterminded the 9/11 terrorist attacks. Bin Laden was discovered in a hideout in Pakistan. After Obama rejected Biden’s advice to wait, Biden then got on board with Obama’s decision to go ahead, says the book, which was released after the presidential election.

Biden has given somewhat conflicting accounts of his stance on the bin Laden raid. For example, according to factcheck.org, he told a Fox News reporter, that he never said “not to go after [Osama] bin Laden.”

Factcheck.org gave that transcript as:

Doocy: Didn’t you tell President Obama not to go after bin Laden that day?

But the site further reported that Biden later “recounted how he advised Obama during a national security strategy meeting in April 2011 to wait for further confirmation that bin Laden was actually in the compound in Pakistan before acting.”

This is what Biden told NBC News about that moment. He said six leaders had a meeting about whether bin Laden was in the Pakistani hideout.

President had a roll call. Everybody had some– some– some– maybe yes, maybe no. I think on balance, go. The only guy who had a full throated– full-throated, ‘Go, Mr. President,’ was Leon Panetta. I walk out of that meeting, as I usually do. I get to be the last guy to be with the president. We walked up toward the residence, toward his office. And I knew he was going to go.

And what I always tell him, when he said– looked at me again, I said, ‘Follow your instincts, Mr. President. Your instincts have been close to unerring. Follow your instincts.’ I wanted him to take one more day to do one more test to see if he was there. But he did it for one reason. He had 100% confidence in the SEALs that even if bin Laden wasn’t there, there’d be no collateral damage and they’d be able to get back.

According to a LA Times article, in his book, “Duty: Memoirs of a Secretary at War”; Former Defense Secretary Robert Gates was very critical of Vice President Joe Biden. Biden, he charges, “has been wrong on nearly every major foreign policy and national security issue over the past four decades.”

Wisconsin Right Now wrote an article in August about a report that Obama had said recently, “Don’t underestimate Joe’s ability to f–k things up.”