“We could find no better example of courageous police leadership beyond the efforts of Chief Weber.” -Law Officer.com

When Law Officer.com, a national news site devoted to law enforcement issues, went looking for a police chief in America deserving of its first-ever Courageous Police Leader of the Year, it quickly became apparent that there was only one obvious choice: Wauwatosa Police Chief Barry Weber.

“As we scoured the headlines of 2020, we could find no better example of courageous police leadership beyond the efforts of Chief Weber. Therefore, we would like to honor Chief Weber,” Law Officer.com wrote in a letter to the chief, revealing that Weber was selected to receive the 2021 national award.

The Wauwatosa police chief stood resolutely behind his officers and force during a summer and fall of enormous public tension and anti-police pressures, including a defund the police movement fueled by a protest/riot group that was even involved in a violent assault at an officer’s private home. He did so without a flashy style or fiery rhetoric; day-in and day-out, Weber simply stood strong and steadfast in the face of great pressure. His law enforcement strategies kept Wauwatosa from burning or suffering significant damage/injury to people or property, unlike other cities.

After looking at leaders in more than 300 communities, from large to midsize to smaller, it became quickly clear to the national law enforcement site that Weber was the best choice.

In accepting the award at a ceremony at the Police Department on February 23, 2021, Weber said the honor was humbling. (Check out the Law Officer.com website here.) 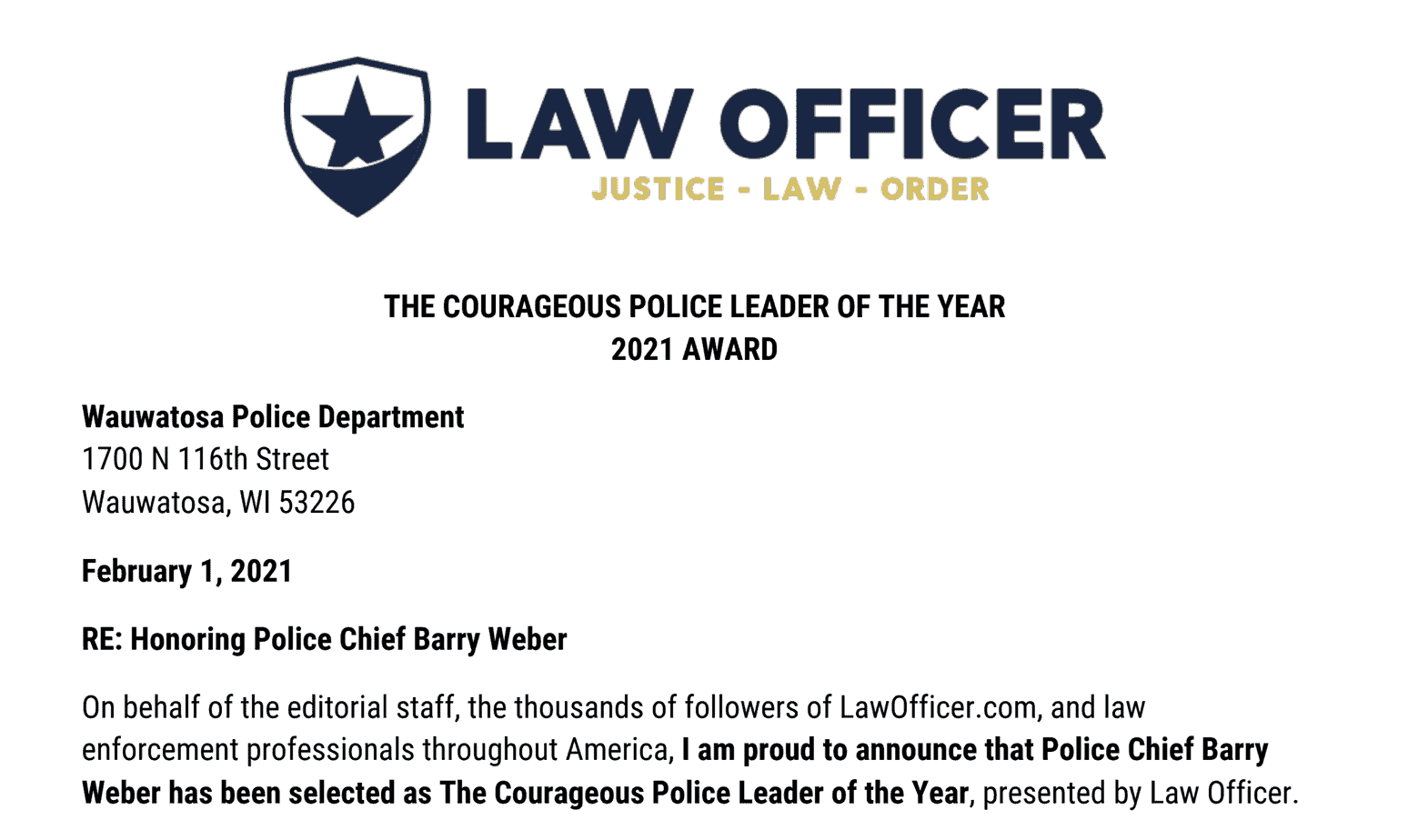 “When you say courageous police leadership, we just tell people to do the right things,” the chief said. He said it’s great if people “like what we do, but if they don’t, I don’t much care.” What matters, he said, is that the decision is the right one.

He praised the rest of the department, saying they are the reason “I can stand here.” Weber is a chief who enjoys the support of his rank-and-file, who filled the conference room to watch him receive the national honor.

The chief earlier announced that he’s retiring in June after 48 years in law enforcement. He’s been Wauwatosa’s chief since 1990, and he’s hired every single officer currently on the department.

In selecting Wauwatosa Chief Barry Weber for the award, Law Officer.com considered such traits as character (such as whether a chief leads with grace as opposed to fear and force); whether the chief focuses on doing what’s right; whether the chief leads with selflessness as opposed to making decisions to highlight themselves; and how they handle controversy. Weber scored extremely well on all fronts.

“The year 2020 was trying for many police leaders who grappled with an unprecedented pandemic, seemingly never-ending protests, and increasingly absurd political demands and pressure,” Law Officer.com wrote in a letter to the chief.

“Amid the chaos and cowardice, we observed how Wauwatosa became an epicenter of perhaps the most irrational episodes of ‘racial justice’ that unfolded in 2020. And while we were deeply concerned about the political turmoil immediately affecting the Wauwatosa Police Department, we were struck by the humility, the wherewithal, and the courage of Chief Barry Weber.”

Wisconsin Right Now awarded Wauwatosa Chief Barry Weber the top position in our 2020 “Wall of Fame.” We said, “Weber exemplifies the highest principles and standards of a true leader. Weber is a cop’s cop. He defended and supported one of his officers under immense pressure. Weber withstood continuous unfair attacks and calls for his resignation by The People’s Revolution. Weber did a fantastic job during the ongoing protesting and rioting as he rode the fine line between allowing people to protest while maintaining the safety and security of the community.”