Milwaukee Journal Sentinel reporter Molly Beck specifically asked state Rep. Barb Dittrich for examples of transgender athletes in Wisconsin, but now the newspaper is running a slanted story with quotes critical of Dittrich for providing examples to the public.

A transgender athlete slammed Dittrich to the newspaper for running her totally obscured photo. But Dittrich never named or identified the athlete in any way. Only the newspaper and Molly Beck did that. Dittrich’s office took great pains to stress confidentiality for the athletes when responding to Beck’s request for examples and completely obscured their identities.

So the Journal Sentinel apparently thinks it’s newsworthy to write about how many examples there are of transgender athletes in Wisconsin, but it’s somehow wrong for Barb Dittrich to give examples without names and identities?

Got that? The newspaper is now running a negative article about the Republican lawmaker that trashes her for identifying an athlete only the Journal Sentinel identified and for providing examples when the newspaper asked for them, in a story in which the newspaper provides examples.

Meanwhile other stories that could be covered – say, what police reports revealed about Rep. David Bowen’s actions when a police officer was attacked at his own home or DA John Chisholm’s 60% non-prosecution rate – go uncovered.

Despite the negative slant against Dittrich in a video, story, and caption, it’s the Journal Sentinel that named athlete Emma Cameron and ran imagery that revealed her identity:

Talk about a double standard. This is an example of a story the newspaper would claim is objective but that has a clear take: Convincing readers that it’s wrong to protect women’s right to fair competition in sports.

When Dittrich provided two examples to the public of transgender athletes who displaced women in competitions, she didn’t release the athletes’ names or identities. She says she provided the examples after false claims circulated on social media that there were none. This is somehow turned into a scandal by the Journal Sentinel.

The liberal newspaper tipped its hand that its negative story by Beck was forthcoming when it posted, over the weekend, a misleading video of the transgender athlete slamming Dittrich, a Republican from Oconomowoc who sponsored legislation called the Protecting Women in Sports Act.

For Dittrich, the issue is about women’s rights. Dittrich and other women who spoke at a press conference on March 3, 2021 extolled the importance of Title IX, which paved the way for women and girls to participate in sports. They said efforts to allow biologically male transgender athletes to compete in women’s and girls’ sports would roll back the provisions of that historic act, creating a non-level playing field. Among those supporting the Republican bills was Olympic speed skater Bonnie Blair-Cruikshank.

Dittrich said that “parents and athletes throughout my legislative district who have devoted countless hours to supporting fair competition and athletic excellence have come to me” and asked for the bills.

Back to the Journal Sentinel: The newspaper deleted the video slamming Dittrich without providing an explanation to readers.

However, the video was still available for some time on the newspaper’s Flipboard page before it was deleted there too. It was captioned, “Emma Cameron, 28, is a runner and transgender woman who had a photo of her running tweeted out without her permission by Rep. Barbara Dittrich.”

On Tuesday, May 11, the newspaper ran the story slanted to imply Dittrich’s bill is making an issue where there is none but that also paradoxically accuses her bill of causing harm, written by the same reporter who challenged Dittrich to provide examples, albeit after she had already provided them on Twitter. We obtained Beck’s emails through an open records request. 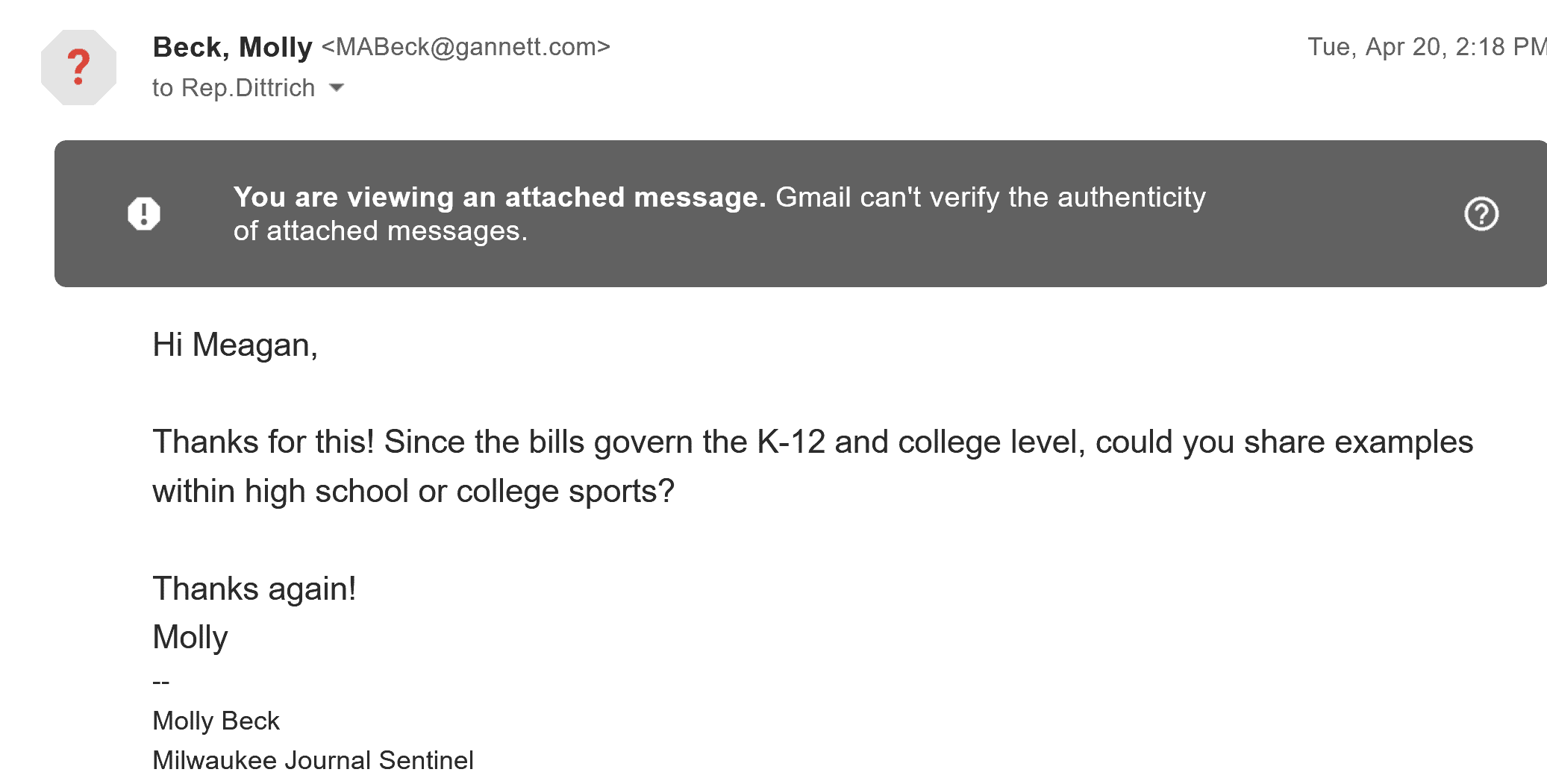 We think it all smacks of an attempt by the newspaper to gin up a misleading and biased narrative against Dittrich for sponsoring legislation that goes against liberal orthodoxy.

In misleading fashion, Cameron tells the newspaper in the video, “Barb Dittrich put up this photo of me competing” and said, “I felt existentially hurt by the representative’s attack, kind of calling me out on social media like that.”

Cameron said in Beck’s story, “It seemed like she was asking people to attack me.”

Dittrich’s tweet, which the newspaper could have quoted but didn’t, said, “Since I had the courage to introduce the protecting Women in Sports Act last week, I’ve faced plenty of criticism. One of the false claims is that there are ZERO examples of biological males edging out women in WI sports by competing as a transgender athlete. Here are examples of 2 transgender athletes who’ve knocked women out of placing in different sports recently. I have hid their identities because they bear the image of their Make and deserve not to be harassed. #InterntionalWomensDay.”

The Journal Sentinel, as with other media outlets, routinely runs photos taken in public places of people without getting their permission – for example, crowd shots at rallies. Cameron’s identity is not hidden in the JS video either.

“The very reason I did not grant Miss Beck an interview on this issue was the fact that I know her to be unfair in her coverage,” Dittrich told Wisconsin Right Now. She said she “originally shared these extremely obscured photos” because of false claims circulating on social media saying there were “no cases of transgender, biological males displacing female athletes in Wisconsin.”

Dittrich continued, “The only ones to reveal the name of any athlete have been the athlete herself and Molly Beck. The photo was not as presented by the athlete in the video interview and no one made any effort to attack her. It’s disgusting and unprofessional that Beck knows this to be false, yet she insists on advancing the false narrative.”

We reached out to Beck with a series of questions, but she didn’t get back to us, other than to ask about tweets we referenced in our questions.

We also obtained an email Beck wrote Dittrich about the deleted video through an open records request. “This was a video from our photo staff that was published before it was scheduled to be and editors unpublished it soon after it posted. The story and video are scheduled to publish Monday. Emma Cameron described the photo to me the same way as appears in your attachment. If you did reach out to Cameron before posting the photo of her, please let me know,” she told Dittrich.

Cameron told the newspaper, “I’m a proud trans athlete” who has competed in the female category “for years.” Yet Cameron then paradoxically claims to be upset about the prospect of public identification.

Cameron criticized the “recent wave of anti-trans bills that has been coming up.”

Cameron acknowledged, “I guess they took the photo and they put this black line across my eyes” – but actually the black box covered more than that. Cameron claimed, “Everyone knew who it was.”

Then, in contradictory fashion, Cameron switched from being concerned people could tell who she was to saying the black box “felt like an extra kick in the face.”

“Thank you for reaching out regarding AB 195 and AB 196. In researching this legislation, our office has both found instances, both in WI and around the nation, of biological males participating in women’s athletic competitions. The examples shared with you come from our constituents and articles. We would hope you would treat these individuals’ identities with the greatest sensitivity and respect. We have taken pains ourselves to be respectful and dignified in sharing these stories while not putting these individuals in the public eye unduly.

Examples
Individual A competed in the John Dick 50K and beat another Wisconsin woman who would’ve otherwise set a personal record.
Individual B competed in Birkebeiner Fat Bike and knocked two other biological women into lower finishing spots.
Additionally, several other women chose not to compete at all due to the perceived disadvantage.

We are not sharing the names out of the utmost respect for the safety of the transgender competitors. This information was shared with this office by women competing who feel their accomplishments have been stolen by transgender individuals who have the advantages of greater bone density, greater lung capacity, and greater muscle mass despite hormone treatment. Furthermore, Wisconsin law is ambiguous in regards to these rules and regulations. These bills would provide clarity and a clear expectation for athletes when engaging in competition.

The goal of this legislation is to create an athletic venue for all athletes without depriving women of the accomplishments they have worked so hard to achieve; providing safe, suitable venues of male, female, and all (co-ed) respects scientifically established differences while remaining respectfully inclusive.”

Print
Facebook
Twitter
Linkedin
Email
Tumblr
Previous articleFallen Heroes: Remembering 6 Wisconsin Law Enforcement Officers
Next article44% of Wisconsin Small Businesses Have Open Jobs, Can’t Find Workers
Jim Piwowarczykhttps://www.wisconsinrightnow.com/
Jim Piwowarczyk is an investigative journalist and co-founder of Wisconsin Right Now. Married with 3 kids, a chocolate lab, and a german shepherd. Jim served as a police officer in Wisconsin for more than 20 years. His career started as a police officer in Milwaukee County in 1994 as a patrol officer, until he was promoted to patrol sergeant in 2003 where he worked until he left in 2009 to pursue business aspirations. Jim Piwowarczyk was a field training officer, evidence technician & hostage negotiator and conducted many drug investigations. Jim continued to work part-time for an area police department. Jim is avid real estate investor, and small business owner & developer. Jim has coached youth football and basketball. Jim is also an avid fisherman and hunter.