Franklin Mayor Steve Olson is calling out Milwaukee County District Attorney John Chisholm for failing to prosecute an alleged multi-million dollar marijuana grow in a residential area that is located not far from a school.

“John Chisholm is the DA for Franklin as he is for the City of Milwaukee,” Olson told Wisconsin Right Now in an interview. “He has to recognize community standards in his entire jurisdiction. We pay his salary too…Who gave John Chisholm the authority to ignore a substantial violation of any law?”

Mayor Olson Asked: “How does a liberal community’s views on marijuana get forced on a community that values the letter of the law? This is not a gray area kind of case. This isn’t your college roommate’s stash in the corner of the dorm room, and, yes, it is marijuana.”

The mayor also called out Chisholm in an email response to an upset constituent. “This situation is absolutely unacceptable for the city of Franklin,” wrote Olson.

“Unfortunately, Franklin’s ability to mitigate it is very limited. The District Attorney and those from downtown don’t share our outrage nor our view of the significance of the violation of law….I will say that Franklin’s attitude is entirely different from those who have the authority to enforce the law.”

The video was given to us by an anonymous source. WRN can not verify some of the statements made in the video.

We spoke with Milwaukee County Supervisor Patti Logsdon. The grow operation is in her district. Logsdon said she had been made aware of the situation by a constituent, that she was very concerned about it and is continuing to investigate.

We contacted Chisholm’s spokesman Kent Lovern about the grow and, of course, didn’t hear back. The Franklin police chief has also declined to comment.

We called State Representative Ken Skowronski of Franklin for comment. He did not return our call.

The constituent who wrote Mayor Olson lives near the grow and was appalled. We are withholding her name for her protection and to avoid giving away the location of the massive grow operation, which spans 11 greenhouses and possibly 3,500, according to a search warrant affidavit obtained exclusively by Wisconsin Right Now.

That affidavit said police had three confidential informants; they also stopped a car with two men leaving the grow who said they were from Mexico, lacked identification, and had marijuana buds on the back of their pants legs, the warrant says.

We learned from the landowner, who claims the plants are hemp, that police sent him a municipal ticket for marijuana possession after the DA did nothing, and we learned from sources that the plans tested well over the legal level allowed for hemp, allegedly making it marijuana under the law.

“Thank you so much for finally doing a story on the pot farm in Franklin and the unbelievable things happening,” the neighbor wrote WRN. “I have contacted several media, the city, mayors, county supervisor, state representative, police, etc., and for most part, nobody seems to care or wanted to do a story. Most don’t even bother to email me back.  A few seemed to care and returned my call/email, but I think their hands are tied.”

She added that she is concerned local kids could have access to the plants, which were basically abandoned on the spot. 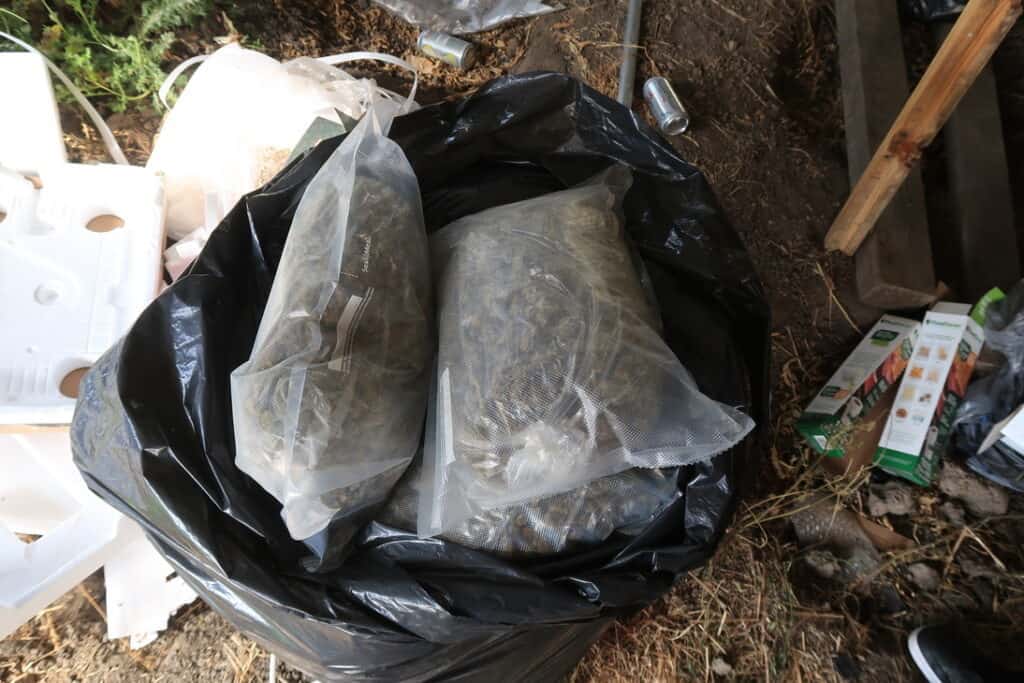 “The DA ought to be ashamed of himself for turning a blind eye to this pot farm,” the neighbor alleged. “This is unacceptable that millions of dollars of pot is left unattended. This illegal pot farm should be monitored until it can be destroyed. Who is monitoring all this pot? NOONE is monitoring it. The City, County and State authorities should be dealing with this…BUT they are NOT. Pot is still illegal in Wisconsin, and this pot needs to be destroyed.  Sometimes, we can even smell it at our house, and it is an awful smell.”

The neighbor said police raided the grow on Aug. 31, and trail cams caught some of the workers “running away in the fields.” She went over to check it out and saw tents and clothing on clotheslines and “massive amounts of pot. It was just unbelievable.”

She alleged: “It’s unbelievable; this is like a multi-million dollar pot operation, and people can just walk in and out and take what they want and nobody’s pressing charges against these people. The last I heard pot was still illegal in Wisconsin.”

“I lost a son because of drugs,” she said, accusing Chisholm of being “soft on crime. He doesn’t want to prosecute illegal actions.”

She said her son started with marijuana in middle school. That led eventually to heroin, an addiction he had for three months when he “wanted to be free of the heroin so bad he took his own life.” 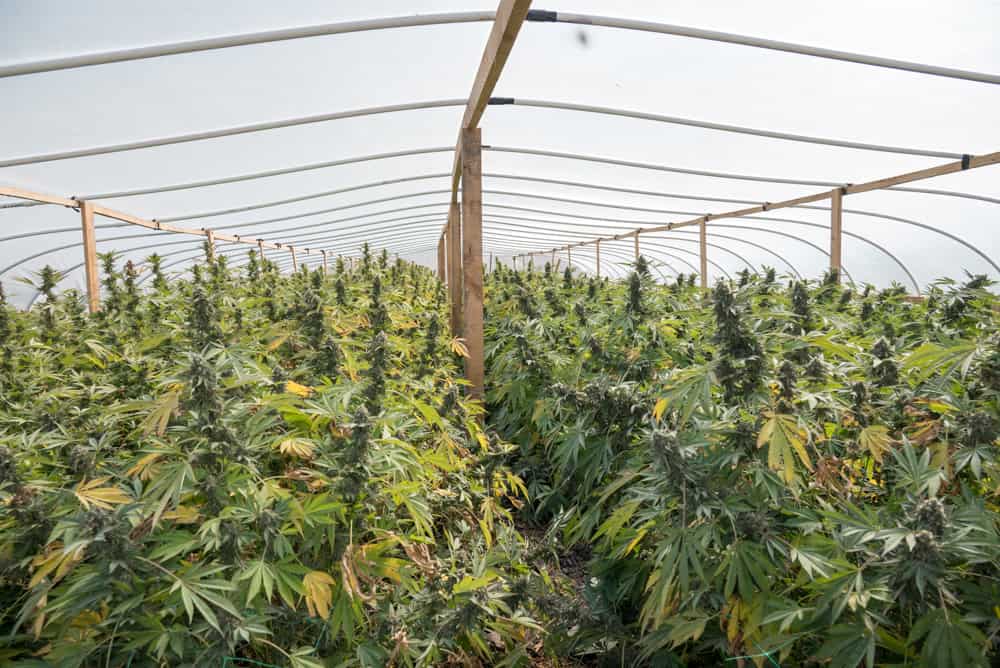 We asked Franklin Mayor Steve Olson why the grow hasn’t been confiscated and destroyed. “I don’t have an answer,” he said to that, adding that it is a legal matter to discuss with police and its still an ongoing investigation.

When asked if he thinks the state Legislature need to consider changing the hemp laws, Olson said there is confusion on definition, amounts, and rationale for definitions which is causing lots of problems for law enforcement. How can you enforce something when you can’t figure out what it means, he asked.

Franklin sends a lot of tax money to the state of Wisconsin and Milwaukee County to pay for the DA and circuit court services that “we are not receiving,” said the mayor.

He is in favor of limited medical marijuana but does not believe in recreational marijuana.

The mayor noted that a school is located not far from the grow. We are not giving the address of the grow or name of the school because the plants are sitting there unattended.

“Franklin doesn’t have the officers to guard the grow,” said the mayor, questioning why the Sheriff’s Department doesn’t guard it.

“Franklin police did everything chapter and verse,” said the mayor, adding that they “do things by the book.”

Print
Facebook
Twitter
Linkedin
Email
Tumblr
Previous articleRon Johnson Calls Biden ‘Disgraceful’ Over False Border Patrol Controversy
Next articleMinocqua Brewing Company Targets ‘Every School Board’ in Wisconsin Not Mandating Masks
Jim Piwowarczykhttps://www.wisconsinrightnow.com/
Jim Piwowarczyk is an investigative journalist and co-founder of Wisconsin Right Now. Married with 3 kids, a chocolate lab, and a german shepherd. Jim served as a police officer in Wisconsin for more than 20 years. His career started as a police officer in Milwaukee County in 1994 as a patrol officer, until he was promoted to patrol sergeant in 2003 where he worked until he left in 2009 to pursue business aspirations. Jim Piwowarczyk was a field training officer, evidence technician & hostage negotiator and conducted many drug investigations. Jim continued to work part-time for an area police department. Jim is avid real estate investor, and small business owner & developer. Jim has coached youth football and basketball. Jim is also an avid fisherman and hunter.

The GOP Senators that have signed the Roth petition to go into extraordinary session to fire parole commissioner John Tate:

The GOP Senators who have NOT signed the petition:

Murder Victim’s Family to GOP Senators: ‘We Are Crying Out for Help…Do Your Jobs’

Justice Clarence Thomas: ‘We Are in Danger of Destroying The Institutions … Required For a Free Society’