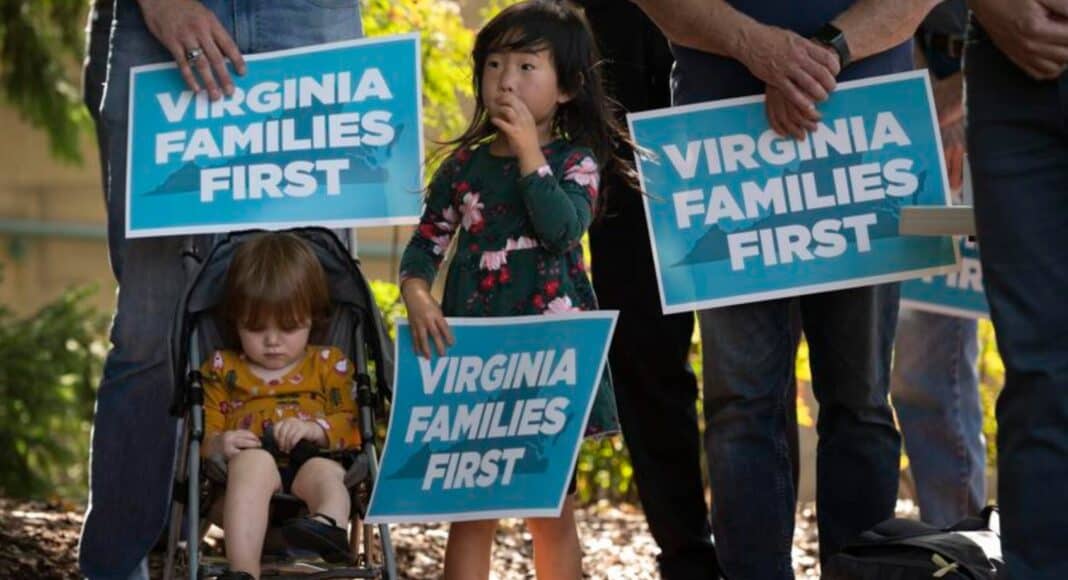 As the vote tally began racking up Tuesday night, Glenn Youngkin was clearly overperforming in key suburban areas, and conservatives were applauding his decision to lean into culture-war issues in the final months of the campaign. At the candidate’s victory party at a Marriott hotel in this leafy Loudoun County suburb, supporters waved a variety of pro-Youngkin signs, each representing a different voting bloc: business owners, farmers, veterans and Latinos. One stood out: Parents for Youngkin.

After the economy, voters said education was the most important issue facing the state, and Youngkin led Democrat Terry McAuliffe on those two issues by double digits, according to exit polls.

In his victory speech delivered shortly after 1 a.m., Youngkin promised to “restore excellence” in the commonwealth’s school system and institute “school choice.”

“We’re going to embrace our parents, not ignore them,” he pledged.

Some of his fiercest supporters were clearly elated after months of fighting school boards on their policies at public meetings and in the media.

“Get your hands off our cubs,” Asra Nomani, vice president of Parents Defending Education, self-declared “Mama Bear” and former Wall Street Journal columnist, told Fox News’ Laura Ingraham Tuesday night. “We are not going to allow you to claim our babies – none of this nonsense is going to be acceptable anymore.”

Some savvy members of the opposition saw this coming. Just a few months ago, veteran Democratic campaign consultant James Carville had a blunt warning for his party: “Wokeness is a problem, and we all know it.”

Democrats are in control in Washington for now, he said, but last year they only narrowly defeated Donald Trump, whom Carville dismissed as a “world-historical buffoon,” and his party also lost congressional seats and failed to pick up state legislatures. The reason was simple: National Democrats’ messaging is out of sync with most voters, he stressed in a desperate and prescient attempt to set the party’s communications strategy on a new course.

But the now-failed Terry McAullife campaign for Virginia governor wasn’t listening, even when Youngkin, a political newcomer, was surging in the final weeks.

A national Democratic political operative who once wrestled an alligator as a fundraising stunt and served a previous stint as Virginia governor from 2014 to 2018, McAuliffe misread the voters and the issues, repeatedly alienating parents fed up with the liberal hold on local school boards. Extended school lockdowns during COVID awakened mama and papa bears across the country opposed to union control of many local school boards. That concern snowballed this year as parents voiced their opposition to the far-left education agenda, including allowing biological male athletes to compete in girls’ sports as well as curricula focused on racial divisions and influenced by critical race theory.

McAuliffe was still tone-deaf when it came to these hot-button education issues, saying that parents shouldn’t tell schools what to teach in a debate with Youngkin. Later, he claimed everyone in the hall that night clapped when he said it.

On the final day of the campaign, the former Democratic National Committee chairman was so convinced he was on the right side of the issue, he invited Randi Weingarten, the divisive head of the American Federation of Teachers, to stump for him. Weingarten is a favorite target of Republicans, who mock her as the “union boss responsible for shutting down schools” during COVID.

As a win looked more likely throughout the night, prominent Republicans and conservative leaders said leftist policies and President Biden’s declining popularity are to blame and called it a bad sign for Democrats in next fall’s crucial midterm elections, which will determine control of Congress.

“People are reacting to the radicalism of the Democratic Party in Washington, and a lot of Democrats are voting for [Youngkin] because they want to reject that,” former Virginia Gov. Jim Gilmore, a Republican, told RealClearPolitics. “They’re most concerned about the grocery tax, education, safety in our schools and attempts to indoctrinate in our schools.”

Gilmore predicted that the Youngkin win would help Republicans wrest back control of at least two Democrat-held House seats in Virginia next fall.

Rep. Jim Banks, a Republican from Indiana who chairs the conservative Republican Study Committee, issued a statement Tuesday night urging the GOP to nationalize the education fight and become “the party of parents. … The concerns of parents need to be a tier-one policy issue for Republicans.”

Jessica Anderson, the executive director of Heritage Action for America, a conservative policy offshoot of the Heritage Foundation, argued that the Youngkin victory shows the power of “kitchen-table issues.”

“When parents say how lockdowns & woke policies hurt their children, they stepped up,” she tweeted. “This movements is real and not going away. Elected officials across the country should take note.”

Many Republican elected officials already have done so. Rep. Rob Wittman, a Virginia Republican whose district stretches from the Washington suburbs to the Hampton Roads area, argued that Democrats and their teacher union allies overplayed their hand. The National School Board Association letter to Biden that likened parents to “domestic terrorists” dramatically backfired on the group and McAuliffe, even after they apologized for the offensive language, he said.

“[Youngkin’s win] elevates the issue as it relates to parents wanting to be involved in their children’s education,” Wittman told RCP Tuesday night. “We have parents that have gone from not knowing who is on their school board to serving on it. The message from parents is ‘I want schools to teach my children how to think, not what to think.’”

In the campaign’s homestretch, McAuliffe escalated his attacks on Youngkin, accusing his campaign of using “racist dog whistles” by vowing to ban critical race theory if elected – all as a defense over his own ill-considered remark that parents shouldn’t be telling schools what they should teach.

The Democratic nominee never acknowledged a separate, discordant element undermining charges of racism against Virginia Republicans. Winsome Sears, a black Marine veteran and the Republican, won the lieutenant governor race in a GOP sweep that included Jason Miyares, a Cuban American, as attorney general. Sears will be the first woman and first minority to hold the state’s second highest office.

“I didn’t run to make history. I just wanted to leave it better than I found it,” she told the crowd Tuesday night at the Youngkin victory party. “Hold on, Virginia, help is on the way. The cavalry has arrived.”

Before any votes were tallied, the Human Rights Campaign, the largest LGBTQ advocacy group in the nation, on Tuesday afternoon labeled Youngkin a right-wing “extremist” on “anti-equality” issues because of his opposition to gay marriage and what it characterized as “anti-transgender misinformation” from his campaign. HRC said it invested an unprecedented six-figure sum to turn out Virginia voters sympathetic to its cause and wrongly predicted Youngkin’s strategy would be a “losing” one that would also place him “on the wrong side of history.”

Youngkin’s supporters countered that he won because he didn’t shy away from the tough issues and was willing to take the conservative stands that most parents support.

“He was the better candidate, and he was talking about issues that matter to me – the vaccine mandates and the mask-wearing, especially for small children … and school choice, the [tax] money should follow the child,” Todd Hampton, a Black man who works in the Virginia public school system, said in an interview. “If the school is failing, parents should be able to put their kids in private schools.”

By late Tuesday night, Youngkin was cruising to a comfortable three-point victory and social conservatives were crowing.

Terry Schilling, the president of the conservative American Principles Project, which spent nearly $1 million supporting Youngkin in the race, predicted that his victory would help propel conservative candidates next year even more than the pocketbook issues that spawned the Tea Party movement in 2009.

“We’re looking at heading into the midterms with an incredible amount of momentum for conservatives … because people are upset not only about what’s happening to their pocketbooks, to their taxes, to their businesses, but to their children,” he said.

Crazy Fight at a Milwaukee George Webb Caught on Video