The poster is also visible in a December 2021 Eau Claire North High School Facebook post announcing Jessica France as a new staff member in the skills section. We reached out to France for comment. She did not respond.

#Freemomhugs has a website where it advocates for “empowering the world to celebrate the LGBTQIA+ community through visibility, education, and conversation. And yes, we still give hugs!”

The poster is causing anger among some parents. It comes on the heels of three Eau Claire school board candidates criticizing the Eau Claire Area School District because they say teachers were “required to attend a staff development day. It has been brought to our attention that content included direction to teachers that ‘…parents are not entitled to know their kids’ identities. That knowledge must be earned.’”

The candidates who released the March 1, 2022, statement are Corey Cronrath, Nicole Everson, and Melissa Winter.

In the wake of that story, we received the poster from a source, who did not want to be named, and who claimed that parents learned other teachers added the poster to their doors.

We reached out to Kurt Madsen, head principal of Eau Claire North High School, where the posters were spotted.

“Thank you for bringing this to our attention,” Madsen responded.

“The District is looking into concerns over this poster. Because the District’s inquiry may involve the actions of a particular employee, Wisconsin law prevents the District from commenting further on an open personnel matter.” 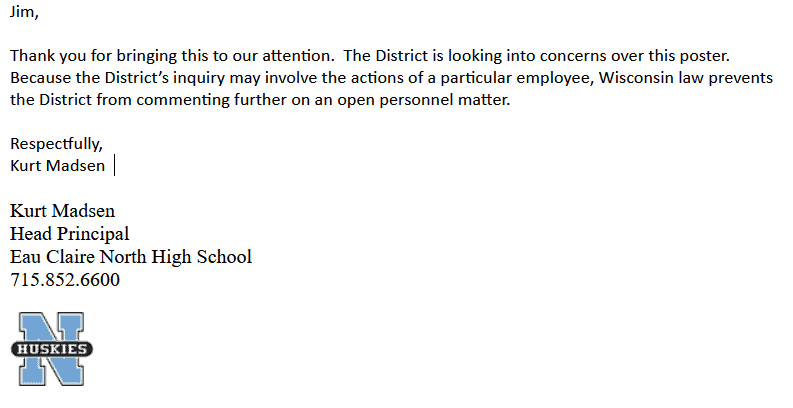 Print
Facebook
Twitter
Linkedin
Email
Tumblr
Previous articleHow Much Wisconsin Homeowners Pay in Property Taxes Each Year
Next articleMilwaukee County DA Chisholm: WEC Commissioners Aren’t Required to Follow State Law in Bizarre Election Decision
Jim Piwowarczykhttps://www.wisconsinrightnow.com/
Jim Piwowarczyk is an investigative journalist and co-founder of Wisconsin Right Now. Married with 3 kids, a chocolate lab, and a german shepherd. Jim served as a police officer in Wisconsin for more than 20 years. His career started as a police officer in Milwaukee County in 1994 as a patrol officer, until he was promoted to patrol sergeant in 2003 where he worked until he left in 2009 to pursue business aspirations. Jim Piwowarczyk was a field training officer, evidence technician & hostage negotiator and conducted many drug investigations. Jim continued to work part-time for an area police department. Jim is avid real estate investor, and small business owner & developer. Jim has coached youth football and basketball. Jim is also an avid fisherman and hunter.

Wisconsin Right Now is a Wisconsin-focused news platform with breaking news & some opinion. We are an independent voice reporting the unsanitized facts on news that the MSM won't report.Contact us at: j[email protected]