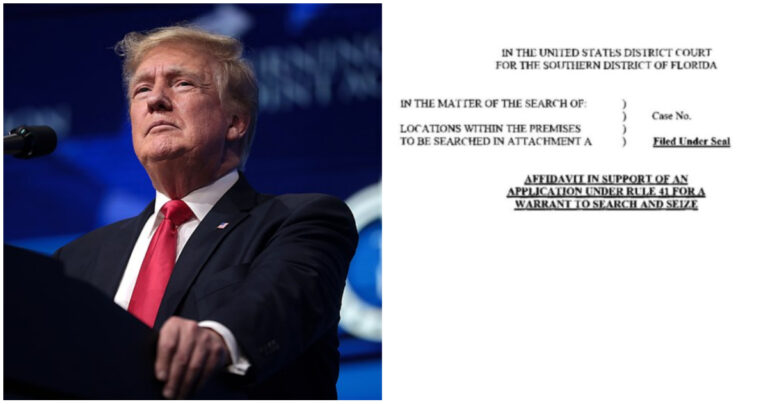 On Friday a judge ordered the unsealing of the affidavit used to justify the search warrant for the FBI to raid President Trump’s Mar-a-Lago, Florida residence.

Roughly half of the 38-page document is redacted. In the affidavit, the FBI says Trump may have violated the law for allegedly keeping classified documents at his Mar-a-Lago residence.

“The government is conducting a criminal investigation concerning the improper removal and storage of classified information in unauthorized spaces, as well as the unlawful concealment or removal of government records,” the affidavit said.

The affidavit states that the U.S. National Archives and Records Administration tipped off federal law enforcement in February of this year that 15 boxes of documents containing “highly classified” materials had been sent to them from Trump’s representatives in Mar-a-Lago.

U.S. Senate Democrat Mark Warner, D-Va., who chairs the Senate Intelligence Committee, reacted to the “improperly handled” documents, saying the Department of Justice “must be allowed to proceed without interference.”

“It appears, based on the affidavit unsealed this morning, that among the improperly handled documents at Mar-a-Lago were some of our most sensitive intelligence – which is one reason the Senate Intelligence Committee has requested, on a bipartisan basis, a damage assessment of any national security threat posed by the mishandling of this information,” Warner said.

The release comes at the order of Judge Bruce Reinhart, who originally approved the raid.

“It is a foundational principle of American law that judicial proceedings should be open to the public,” Reinhart said in his Monday ruling.

Reinhart ruled that a redacted version of the affidavit should be released, in part because the raid on Trump was so “unprecedented.”

“Particularly given the intense public and historical interest in an unprecedented search of a former President’s residence, the Government has not yet shown that these administrative concerns are sufficient to justify sealing,” he wrote. “I therefore reject the Government’s argument that the present record justifies keeping the entire Affidavit under seal.”