Richard Garcia was one of them. His release was discretionary.

Richard Garcia is one of the child molesters released by Gov. Tony Evers’ appointee to the Wisconsin Parole Commission. His victims were kids ages 4 and 9 and an elderly woman he didn’t know.

Police say Richard Garcia, now 57, was convicted in 1985 of burglary and first-degree sexual assault for burglarizing a stranger’s home and sexually assaulting an elderly resident.

In 1993, he was convicted of two counts of sexual assault of a child for sexually assaulting a 4-year-old and a 9-year-old child that lived in his home.

He is a registered sex offender. He was released once before but violated probation and was re-incarcerated before being paroled.

Garcia’s mandatory release date is not until 04/19/2024, according to the state Department of Corrections. His parole was discretionary.

Police said Garcia’s criminal history places him in a classification level that reflects the potential to re-offend. 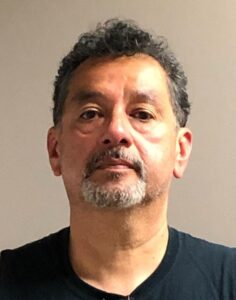 Date paroled: 2/11/2020 [You can look up his parole date here by putting in his name and then clicking on “movement.”] 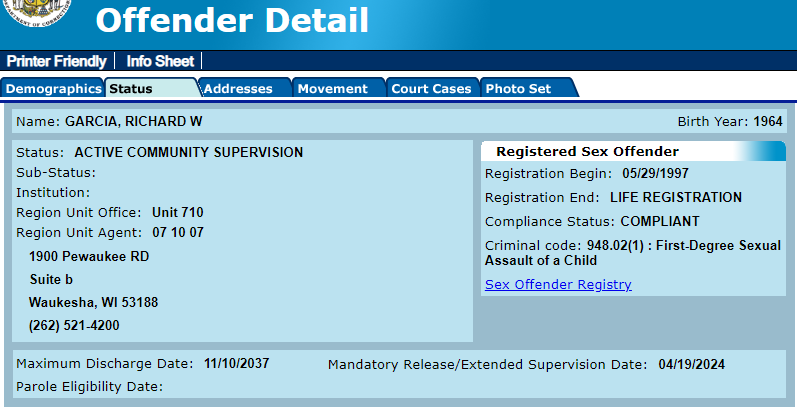 The Victim: 4 & 9-year-old children and an elderly woman.

What the Child Molester Did:

Because he’s a registered sex offender, Waukesha police put out a community bulletin when Garcia was released.  They indicated that Garcia “was convicted of burglary and 1st Degree Sexual Assault for burglarizing a stranger’s residence and sexually assaulting the elderly resident. In 1993, Garcia was convicted of two counts of sexual assault of a child for sexually assaulting a 4-year-old and a 9-year-old child that lived in his home.”

He is not allowed to have unsupervised contact with minors or frequent bars. Garcia is on lifetime GPS monitoring, and he lives with a family member on Baird Street. 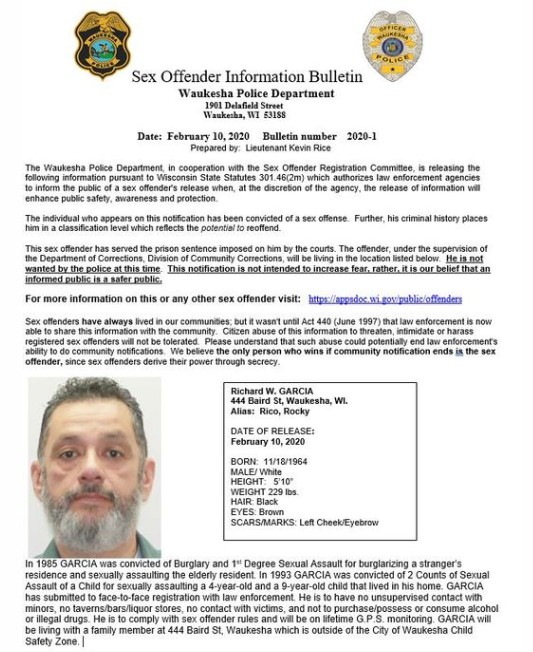