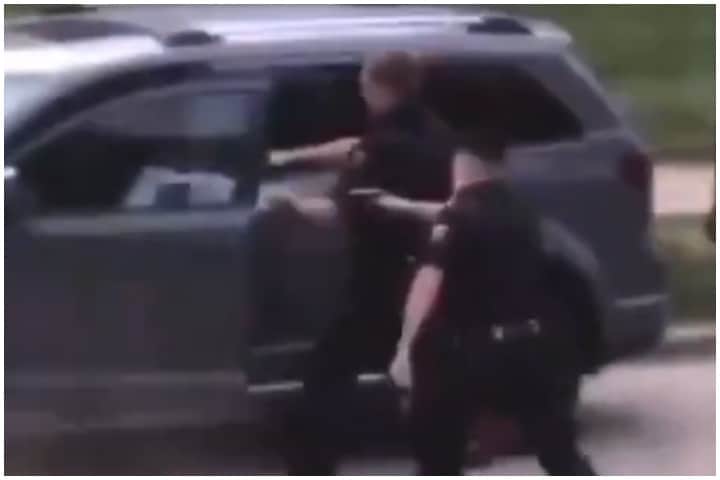 A video that shows a Kenosha police officer shooting a man who was leaning in a car is causing outrage and growing unrest in the streets. The video captures the sounds of seven gunshots ringing out, and Governor Tony Evers wrote in a statement on August 23 that the man, Jacob Blake, “was shot in the back multiple times.”

In the video, Blake, 29, appears to be bending over into the driver’s seat of the car, as the officer clutches his shirt and opens fire at close range. It’s not clear what was said to officers leading up to the shooting or what Blake was doing in the car. It’s also not clear whether he had a weapon or access to one. The Kenosha News reported that officers tried to use a taser on him first.

You can watch the video here. Be prepared that it’s graphic if you choose to do so.

Wow. This Black man was shot several times in the back by @KenoshaPolice today. He was getting into his car after apparently breaking up a fight between two women. He’s in critical condition now. We demand JUSTICE! #BlackLivesMatter pic.twitter.com/I1reDEp4nw

What do Kenosha police say? They released this statement.

At 5:11 p.m. Kenosha Police Officers were sent to the 2800 block of 40th Street for a domestic incident and were involved in an officer involved shooting.

Officers provided immediate aid to the person. The person was transported via Flight for Life to Froedtert Hospital, Milwaukee. The person is in serious condition.

Kenosha Sheriff’s Department and Wisconsin State Patrol were requested immediately so that the scene could be turned over to an agency, other than Kenosha Police.

The Wisconsin Department of Justice (D.O.J.), Division of Criminal Investigation (D.C.I.) will be investigating this officer involved shooting. Further media releases will come directly from D.C.I. Inquiries should be directed to [email protected]

A man with the same name, age, and address block does have an open warrant in a third-degree sexual assault, criminal trespass, and disorderly conduct domestic abuse case from July, online court records indicate. In addition, Racine Eye reported on a previous gun incident and resisting accusation against Jacob Blake, of Racine, of the same age. Blake’s cover photo on Facebook showed cops in a squad car wearing masks fashioned into a pig and devil.

The Kenosha News reported that Blake was trying to break up a fight.

Unrest grew in Kenosha as there were reports that an officer may have been knocked out by a brick.

Footage of officer getting knocked out with a brick in Kenosha. pic.twitter.com/zZYypCgyja

Governor Evers Wrote That He Stands Against ‘Excessive Use of Force

HIS NAME IS JACOB BLAKE. SAY HIS NAME. #JusticeforJacobBlake pic.twitter.com/x5GW4n17HE

Governor Tony Evers released a statement that mentioned a series of other police shootings and demanded “accountability for Black Lives in our country.”

“Tonight, Jacob Blake was shot in the back multiple times, in broad daylight, in Kenosha, Wisconsin. Kathy and I join his family, friends, and neighbors in hoping earnestly that he will not succumb to his injuries,” Evers wrote. “While we do not have all of the details yet, what we know for certain is that he is not the first Black man or person to have been shot or injured or mercilessly killed at the hands of individuals in law enforcement in our state or our country.”

Governor Evers’ statement on Twitter continued, “We stand with all those who have and continue to demand justice, equity, and accountability for Black lives in our country—lives like those of George Floyd, of Breonna Taylor, Tony Robinson, Dontre Hamilton, Ernest Lacy, and Sylville Smith. And we stand against excessive use of force and immediate escalation when engaging with Black Wisconsinites. I have said all along that although we must offer our empathy, equally important is our action. In the coming days, we will demand just that of elected officials in our state who have failed to recognize the racism in our state and our country for far too long.”

Outrage Erupted on the Streets

A protest is happening now after a domestic incident turned into an officer-involved shooting in #Kenosha at 40th St. & 28th Ave.

Police confirm one person is in serious condition.

People on scene say the apparent victim is a man, and father. @CBS58 pic.twitter.com/jsg2ANSD28

The scene in Kenosha was getting tense as the video spread on social media.

#BREAKING: Tear gas just deployed by law enforcement at @KenoshaPolice station. This is all in response to a man who police say was seriously injured in an officer-involved shooting this afternoon. @tmj4 #Kenosha pic.twitter.com/zoC8C79ILK