Kathryn Patterson, 20, a college student from Mercersburg, Pennsylvania, was accused of arson and other offenses after riots in Lancaster, Pennsylvania, erupted when another man, Ricardo Munoz, charged at a police officer with a knife. The officer shot and killed Munoz.

The DA urged protesters to remain peaceful, but the aftermath quickly turned into a riot. According to The Washington Post, at the time of the shooting, Munoz was free on bond on “allegations he stabbed four people last year, including a teenage boy who was stabbed in the face.”

Patterson is an undergraduate student at Franklin & Marshall College in Lancaster, according to The Washington Post, which quoted her father, Chip Patterson, as saying she was acting as a medic. He told The Post her $1 million bail was “obscene,” saying, “Everything that I know so far, which is not a lot, indicates that Kat is not guilty of those charges. But then again, we’ll have to wait and see.”

Lancaster Online spoke to protest leader Alaak Deu, who was with Patterson when she was arrested.

Deu told the site that Patterson was with the civil rights organization Green Dreamz and was “helping protesters as medics throughout the night.” Deu said Patterson was peaceful and didn’t set fires, according to the site.

Speaking of the riots in general (not specific to the claims against Patterson), police wrote that the disorder outside the Police station “escalated as suspects continued to throw items at Police Officers as well as cause damage to the Police station, a parked vehicle and the front of the US Post Office building.” 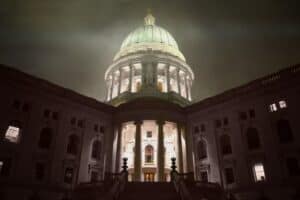 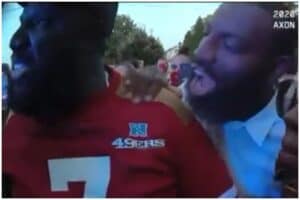