John Larry, the Wauwatosa police and inequities committee chair, was captured on body camera threatening to knock out and slap ‘the sh*t out of’ a police lieutenant this August, according to the video and a citation that Wisconsin Right Now obtained via open records laws.

Larry later called for the resignation of that lieutenant, as well as the police chief.

The government ad hoc committee Larry chairs – which is formally called the “Policing & Systemic Inequities”  – is charged with making recommendations on changes in police and Common Council training and procedures on everything from warrants to racial bias issues to traffic stops.

When Wisconsin Right Now reached out for comment from Larry, he responded:

Watch the body camera video here. State Rep. David Bowen is standing behind Larry in it:

The citation further alleges that Larry “challenged Officer Patnode-Fonseca, stating, ‘Put your hand on me!’ ‘I’m waiting on you,’ ‘I’m not playing’ and ‘Come looking for me.’” All of the comments were recorded by officers’ body cameras.”

In addition, two other videos obtained by Wisconsin Right Now show that Larry went to the Wauwatosa police station to check into Ronald Bell and William Lofton after they were arrested – Bell for allegedly shooting at Police Officer Joseph Mensah. In that video, Larry refers to Bell as a “brother of mine and the Movement.”

“I got word that two of our protesters, two Black males that participate in our protests, the Peoples Revolution’s protests were stopped and arrested here in Wauwatosa, and so I just made my way over here to see what’s going on…” Larry says in a Facebook Live video. Police lobby video then captured him at the department. You can see both videos below.

“I’m over at Wauwatosa police district trying to see what’s going on with two brothers of mine and the Movement.” He said Chief Barry Weber released a statement “basically saying that he’s not going to sit by while the protesters continue to do their thing under the name of peaceful protest so I’m just here real quick to check on my brothers, to make sure they were read their rights. To make sure they are being treated fairly and we will see what happens.”

In addition, we’ve reviewed a series of incendiary posts on Larry’s Facebook page, including one that says “Line ’em up White-watosa Police Department, line ’em up!”

Earlier this summer, the Wauwatosa Common Council established the ad hoc committee to address policing and systemic inequities. The committee consists of four Wauwatosa elected officials and four community members. Recently questions have been raised about who exactly is on this board, why were they selected, where do they actually live and what are their backgrounds.

Two of the other members don’t live in Wauwatosa. Two – including Larry, who is a Wauwatosa resident – were cited last month for disorderly conduct related offenses. Larry and one other member are on The Peoples Revolution Facebook Group.

In particular, concern has focused on Larry. The Peoples Revolution organization has shut down Mayfair Mall and disrupted Wauwatosa for months. The Wauwatosa police union has called for the ad hoc committee to be disbanded.

Wisconsin Right Now obtained the citation issued by police to John L. Larry. It was $1,321.

The citation, released through open records laws, says that Larry was accused of disorderly conduct on Aug. 14. The citation was served on Aug. 20.

The citation narrative accuses Larry of arriving at the scene of a protest “after protesters surrounded squads and did not allow police to leave scene.”

You can read the full citation here. 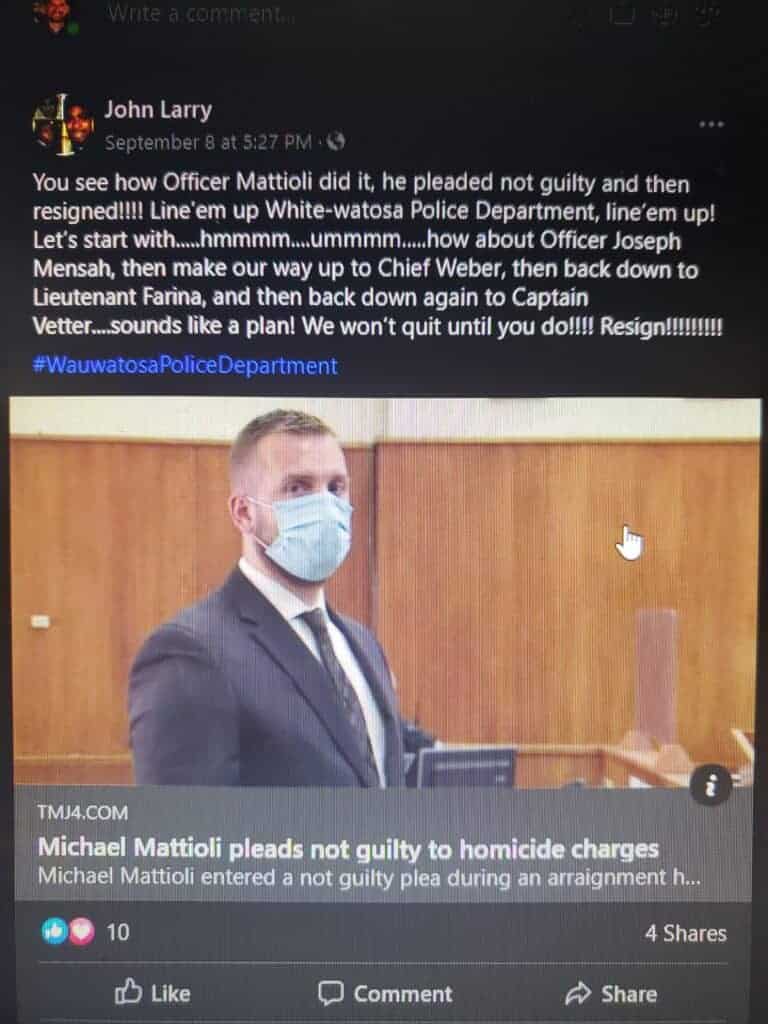 Larry has a history of writing controversial Facebook posts. They include:

“Neglecting to see dead black and brown bodies on the streets of Amerikkka!”

“White-watosa Mayor McPride has and continues to demonstrate failed leadership!”

“I have absolutely no trust in the Wauwatosa Police Department! Until Chief Weber and Officer/Killer Mensah are relieved of their duties.”

Here are more of his posts: 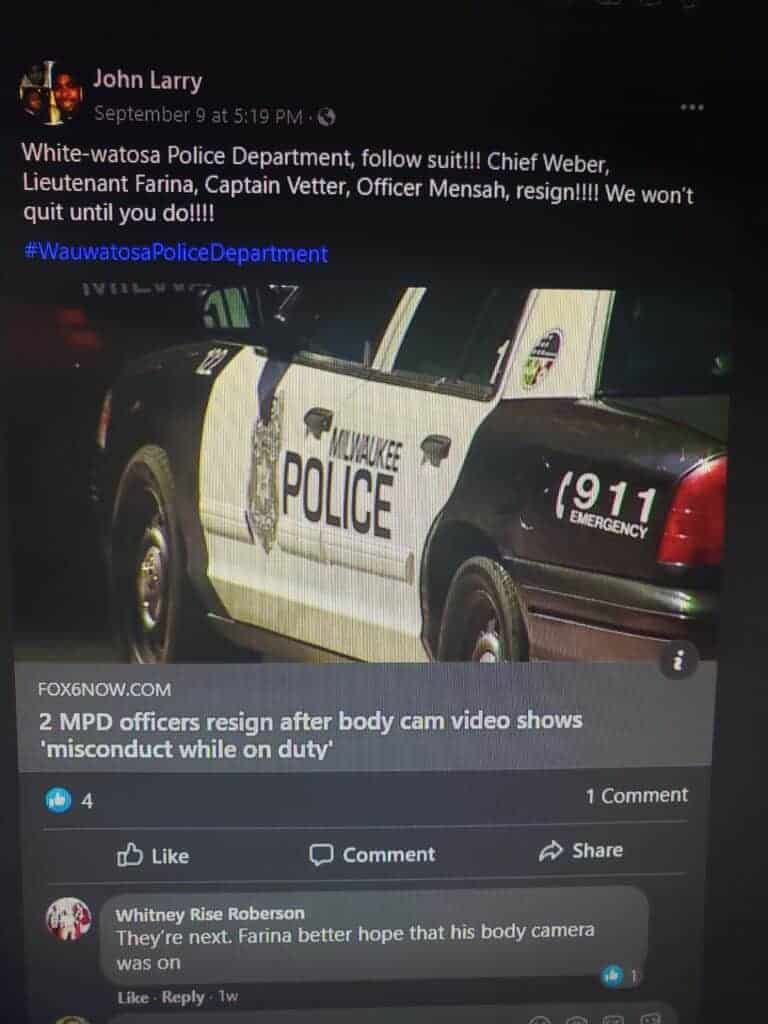 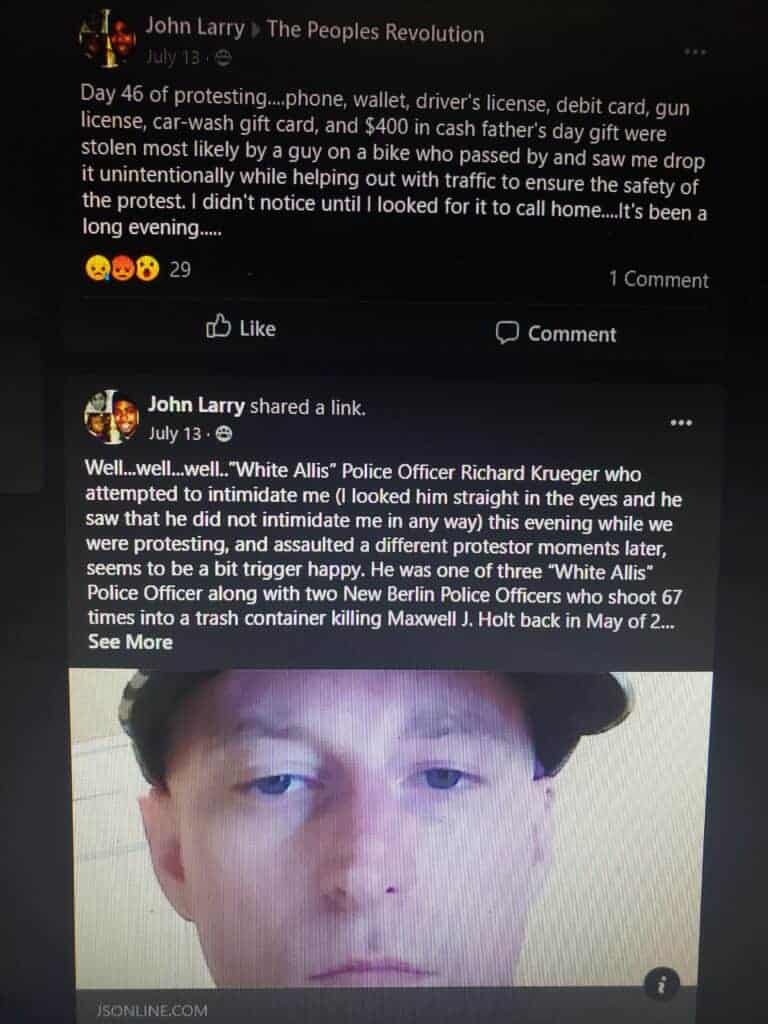 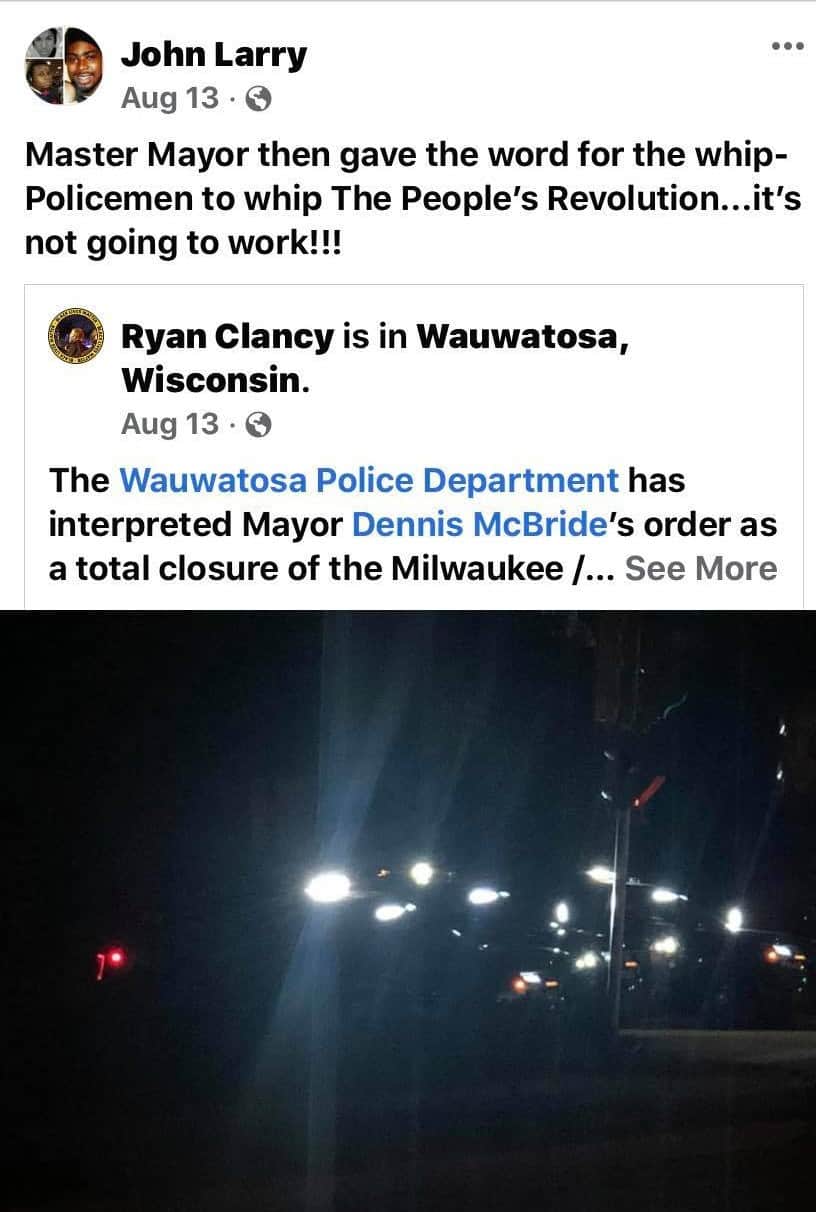 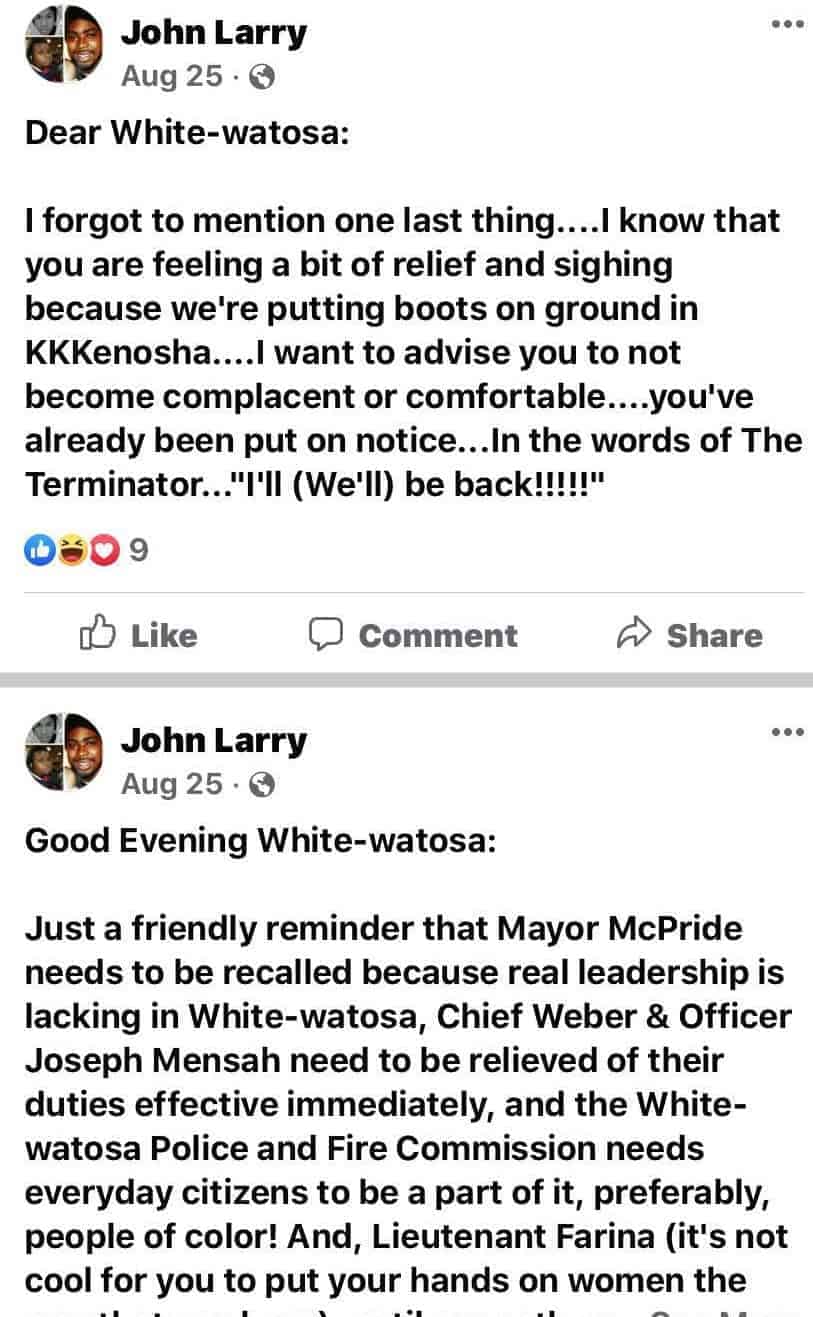 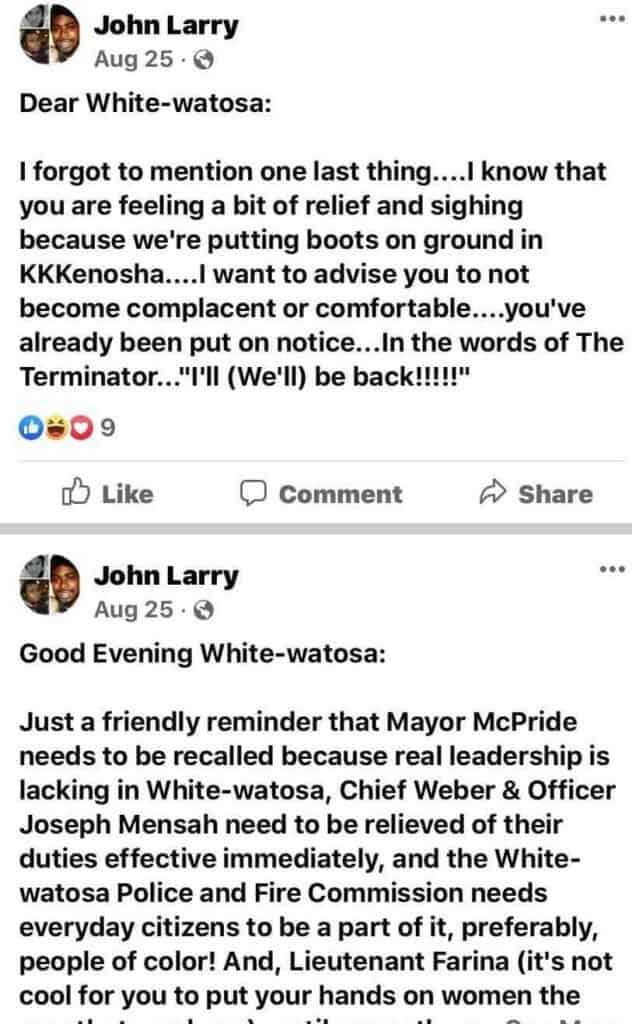 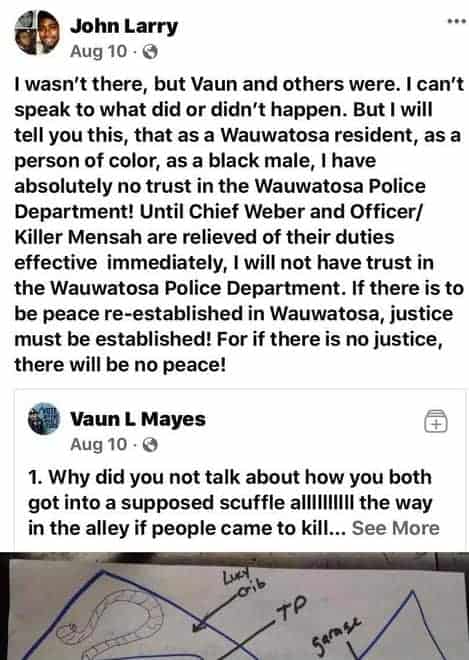 Questions Raised About the Other Wauwatosa Police Committee Members

The committee was formed to review and make recommendations for the Wauwatosa Police Department on the following items:

Larry is not the only committee member with a recent citation. One of the other committee members, Zaynab Baalbaki, is a City of Milwaukee resident who was issued a citation for disorderly conduct for an incident in Green County on Aug. 2. That case is still open so WI Right Now was unable to obtain any police reports regarding this incident. We asked her for comment about the ticket, but she did not respond. 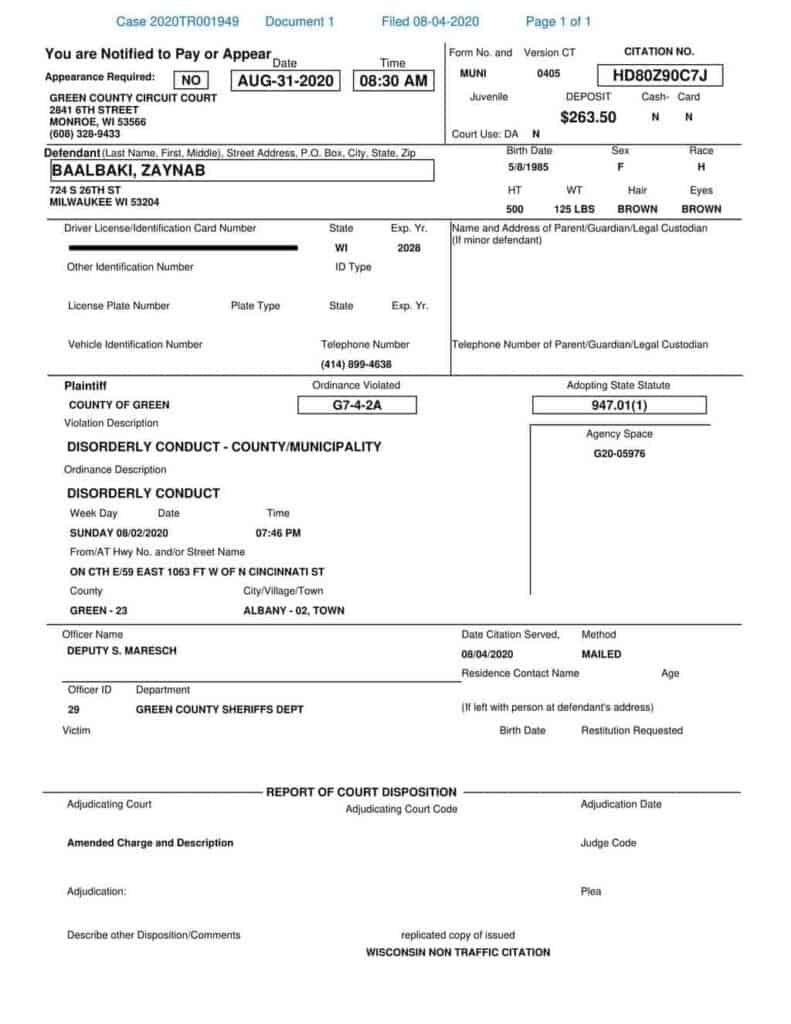 Baalaki is a founding member of The People Revolution Facebook Group 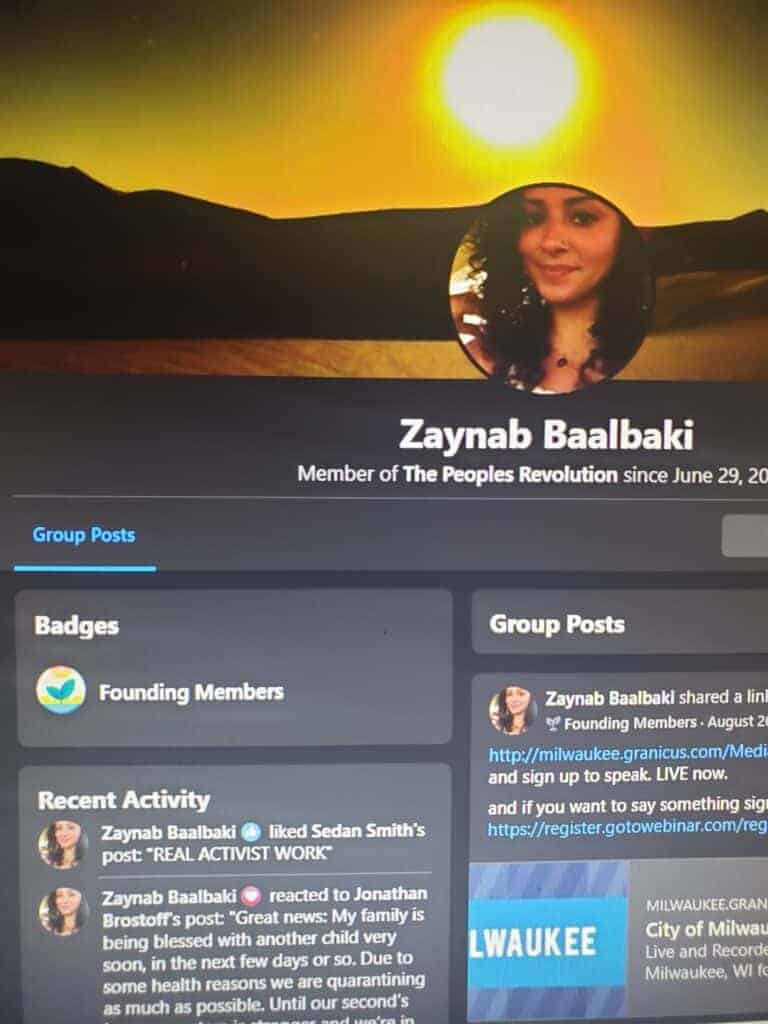 LaSharle Borg, another committee member, is a realtor who is also a Milwaukee resident.

The fourth community member is a Wauwatosa resident who is a lawyer.