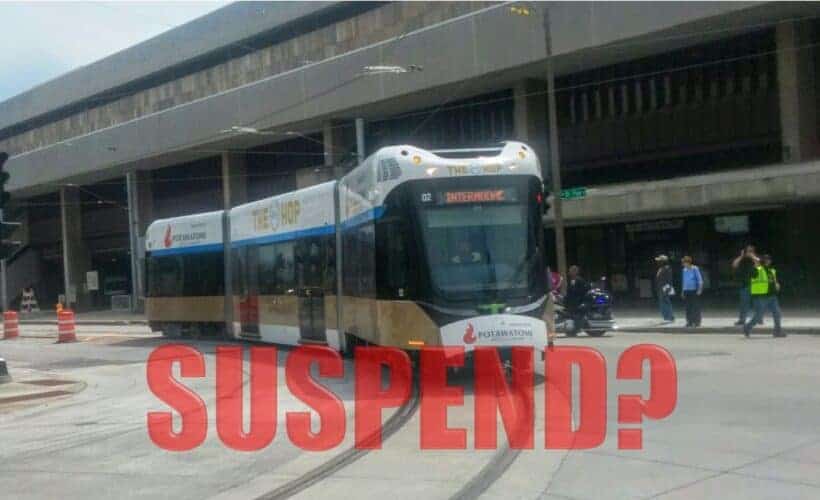 Will the Hop be suspended?

The Milwaukee downtown streetcar, The Hop, is projected to lose $3 million next year, but if it’s suspended the city may be on the hook to pay the federal government back more than $66 million, according to a city memo we obtained.

The memo was dated Oct. 20 and addressed to the Common Council and Finance and Personnel Committee members. It was written by Commissioner of Public Works Jeffrey Polenske.

For years, The Hop has generated controversy from multiple directions; some have argued from the start that it would be a money drain and fiscal boondoggle. Others say light rail and buses better serve people. Others argued that city officials shortchanged the black community with its routes, failing to connect low-income people to jobs despite the original intent. Under the Community Impact section of the memo, it talks about “how critical public transportation is in creating a more inclusive community.” The Hop runs from the lake to the east side.

The Polenske memo, which was solicited by some aldermen who floated the idea of suspending The Hop, makes it clear that, either way they turn, The Hop is going to be a money drain in 2021, and the city is going to lose millions of dollars. The aldermen have raised the idea of suspending the street car because COVID-19 has contributed to a shortfall in parking fund dollars that were used to offer it free to people.

As the streetcar improvements are nearly new, a 1-year suspension of service “could potentially require that a vast majority of the $66,892,803 federal investment be returned,” it reads.

Even if suspended, it could still cost at least $2.6 million in operational expenses, including vehicle insurance. Spending would be reduced from $4.5 million to between $2.62 million and $3.01 million by suspending it. Thus, suspending The Hop would narrow the amount the city was losing somewhat but not completely – and that’s before the possible federal payback is factored in.

In 2021, the proposed city budget includes $4.5 million in total expenditures for streetcar operations and $1.33 million in anticipated non-city revenues. The $3.17 million difference “is proposed to be funded from net revenues from the Transportation Enterprise Fund,” the memo says.

Using that fund was approved by a Common Council resolution “until such time as a dedicated local funding source for public transit in Milwaukee County is established.”

DPW was asked to document the “consequences of suspending streetcar service in 2021 as a cost saving measure and to increase the transfer or net Transportation Fund revenues to the general fund.”

The Federal Transit Administration awarded the city more than $66 million in federal grants for the capital costs of the Hop streetcar projects, according to the memo.

These are legally binding agreements. The master agreement between the feds and city holds that the federal government retains a federal interest in all real property, equipment and supplies acquired with grant funding.

The federal government can “require it to return the entire amount of federal assistance spent on the projects property if… it has… failed to use its project property,” warns the memo.

“Suspending streetcar service in 2021 would violate the terms of the master agreement, most notably the requirement to use the improvements constructed with federal funding continuously and appropriately throughout the useful life of the project and would potentially require that the city return the value of the remaining federal interest in the project,” it says.

The city also received a $492,250 federal grant to maintain transit service during the COVID-19 pandemic and a suspension of The Hop during COVID-19 would likely require that the City return it, according to the memo.

The city would also forfeit $1.33 million in 2021 non-City revenues including $833,000 from Potawatomi sponsorship and $390,000 in advertising and sponsorship revenues.

Even if suspended, the city would only recover a portion of the $4.5 million in proposed expenditures because it would still have “significant operations costs.’

Staff would be needed to do things like “exercise the streetcar vehicles on the alignment,” do preventative maintenance, respond to damage to streetcar infrastructure, and so on.

It would also cost money to restart operations including a “robust marketing effort.”

The Hop tried to hire a racially diverse workforce but people would lose jobs if it’s suspended, which would run counter to the city’s mission of “addressing inequities,” concluded the memo.