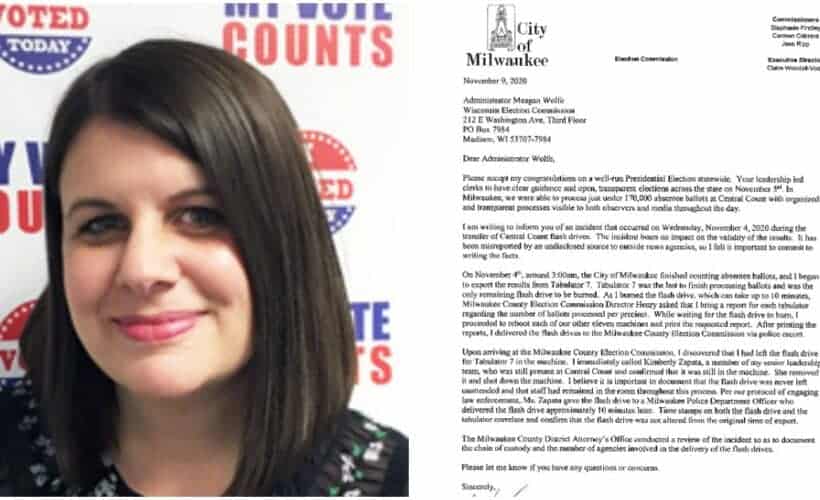 Claire Woodall-Vogg, the head of the Milwaukee Election Commission, now admits that she misplaced a key election flash drive when she went to deliver results to Milwaukee County in the early morning hours after the presidential election.

She says it was found in a tabulator machine.

We had tried to reach Woodall-Vogg for comment repeatedly before running our story on Nov. 6 but she ignored requests for comment. Instead, the next day, on November 7, she and the mayor went to the news media to tout the election. She told the Milwaukee Journal Sentinel, which ignored the misplaced flash drive incident, that Milwaukee’s election counting operation was “well-organized” and “transparent.” She and the mayor criticized the Republican Assembly Speaker for calling Milwaukee’s Central Count operation inefficient.

Two days later, though, she wrote the letter acknowledging the flash drive incident to the Wisconsin Election Commission. What her letter leaves out is what law enforcement sources also told us about the incident; they described a panicked scene when Claire Woodall-Vogg suddenly couldn’t find the missing flash drive with important voter information on it. The law enforcement sources, who didn’t want their names printed for fear of retaliation, said police at the scene felt pressured by district attorney investigators and election officials to stay silent about it all.

Claire Woodall-Vogg says the flash drive was left in a machine; a senior staff member removed the flash drive and turned it over to a Milwaukee police officer who then delivered it to her 10 minutes later. She also insists that the results on it were not altered. The “incident bears no impact on the validity of the results,” she claims.

And she says the DA’s office conducted an investigation to establish chain of custody. The incident caused a stir in police circles because police felt they were being intimidated to say nothing about the matter. One officer reported it to his supervisor, we were told.

On Nov. 7, around 3 a.m., wrote Claire Woodall-Vogg, the City of Milwaukee finished counting absentee ballots, so she began “to export the results from Tabulator 7.”

Tabulator 7 was “the last to finish processing ballots and was the only remaining flash drive to be burned.”

As she burned the flash drive, which she wrote can take up to 10 minutes, Milwaukee County Election Commission Director Julietta Henry “asked that I bring a report for each tabulator regarding the number of ballots processed per precinct,” wrote Claire Woodall-Vogg,

She added: “While waiting for the flash drive to burn, I proceeded to reboot each of our other 11 machines and print the requested report. After printing the reports, I delivered the flash drives to the Milwaukee County Election Commission via police export.”

Upon arriving at the Milwaukee County Election Commission, she wrote, “I discovered that I had left the flash drive for Tabulator 7 in the machine. I immediately called Kimberly Zapata, a member of my senior leadership team, who was still present at Central Count and confirmed that it was still in the machine. She removed it and shut down the machine. I believe it is important to document that the flash drive was never left unattended and that staff had remained in the room throughout this process.”

She states that the Milwaukee County District Attorney’s Office conducted a review of the incident so as to document the chain of custody and the number of agencies involved in the delivery of the flash drive.