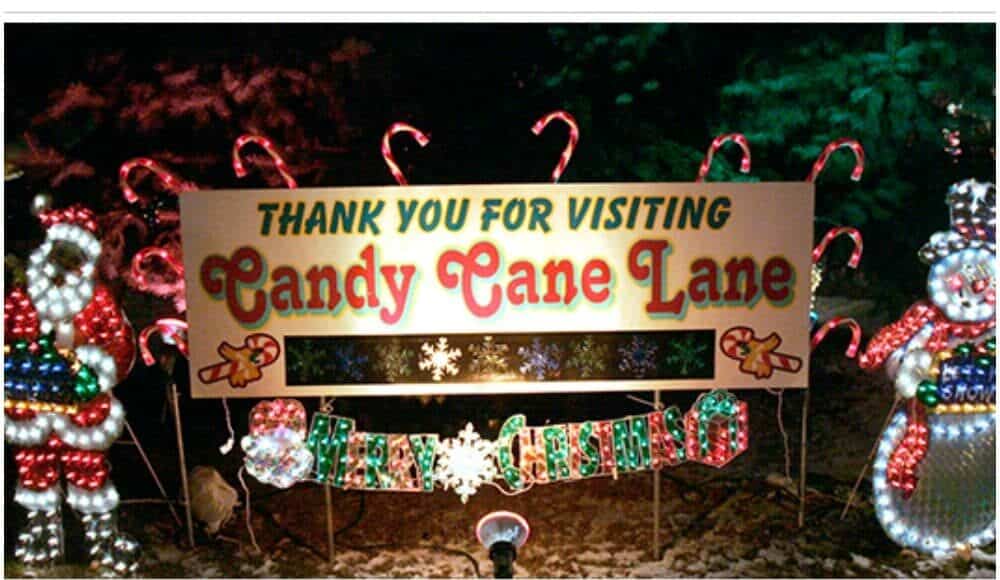 Black Lives Matter disrupted West Allis’s Candy Cane Lane, which is a fundraiser for childhood cancer, on the evening of December 18, 2020. Videos show BLM members shouting “Black Lives Matter,” and “No Justice, no peace,” as they walked down the Christmas light-festooned street.

People on Facebook said members of the group shouted expletives at families along the block.

Videos and other social media accounts paint a picture from the scene. One video shows people with Black Lives matter signs shouting, “Black Lives Matter” as a man in a Santa Claus outfit walked with protesters. Cars stopped in the street. [Follow Wisconsin Right Now on Facebook here for more stories like this one.]

One man shared a post from a friend that read, “So my son and I were playing in the living room and we heard very loud music and people chanting from the outside. We open up the front door to see what all the commotion was about. It was a ‘Black Lives Matter’ march going up and down my block and through candy cane lane. These people saw my ‘Back the Badge’ sign and ‘Trump 2020’ sign and began to shout at us. They began to give us the middle finger and shouted, ‘F-CK YOU F-CK THE POLICE F-CK TRUMP!’ Uhm really? I am holding my ONE year old son in my arms. Glad to see how ‘peaceful’ and ‘respectful’ these people and protests really are lol. What a bunch of pieces of sh-t.”

Mariah Smith shared a live stream, writing, “It was the week before Christmas, and all through the streets… TPR family as loud as can be. Waking up each block with holiday cheer, screaming “NOJUSTICE, NO PEACE”, until all around hear. Giving the gifts of our demands for Black and Brown lives, yet many around us would spread them lies. Santa has his list, the naughty and the nice, will our houses get skipped these following nights?” TPR stands of the People’s Revolution, the group that has protested for months in Wauwatosa; a TPR member is accused of a felony for discharging a firearm at former Police Officer Joseph Mensah.

West Allis police told us, “Last evening, starting at about 6:40 pm, we received a handful of calls of a protest group moving through Candy Cane Lane.  The callers indicated that the group was causing traffic congestion and noise disturbances.  West Allis officers responded to the area and monitored the situation.  There was heavy traffic congestion related to Candy Cane Lane. There were reports of protestors walking in the roadway and using a bullhorn. Officers did not observe any violence or vandalism. No arrests were made and no citations were issued.”

The thread of the Milwaukee County Crime, Fire, and Police News page on Facebook filled up with comments. “Yes, they came through. Did not obey any traffic rules,” wrote one woman.

What is Candy Cane Lane? It is a neighborhood Christmas lights display in West Allis. “In December, 1984, a wonderful group of neighbors living in West Allis, Wisconsin, joined together to collect donations for the MACC Fund – Midwest Athletes Against Childhood Cancer, Inc., in honor of a neighbor’s child diagnosed with cancer,” the website says. “The neighbors worked in concert in decorating their homes and encouraged visitors to make a small donation as they drove through the festively enhanced neighborhood. All of the money raised went to supporting research, treatment, and the eventual discovery of a cure for childhood cancers and related blood diseases.”

One man shared a post from his brother. “SHARE, SHARE, SHARE!!! BLM CRASHES AND TOTALLY DISRUPTS WEST ALLIS CHILDHOOD CANCER FUNDRAISER!!! So, my significant other lives on Candy Cane Lane, and she just texted me – BLM just crashed Candy Cane Lane! …they were blasting music so loud that it made her windows and walls shake, and scared the crap out of her dogs.”

He added, “If you’ve never been/aren’t familiar – Candy Cane Lane is a West Allis tradition. An entire neighborhood goes crazy with Christmas lights/decorations, and carloads come from far and wide and join in the bumper to bumper, stop and go traffic to view this wonder. Thing is though, it’s also a fundraiser for childhood cancer…Yep, BLM is crashing and disrupting a CHILDHOOD CANCER FUNDRAISER!!! Yes, I said “is” because apparently they came back and are still at it! I don’t care who you are, if you don’t have a problem with this, then not only are you part of the problem, you are also a Class A Asshole!!!!”

A woman wrote on Facebook, “We were just there an hour ago and they were there. Driving recklessly. Almost crashed into each other…”

Never Stop Media LLC wrote a lengthy defense of The People’s Revolution group, which you can read here. “The group planned the march through Candy Cane Ln with the intent to bring awareness to the neighborhood and stand up for POC who live in the area,” it reads. “Marchers were seen dressed in holiday spirit and of course Santa made a special appearance for the occasion.”

The group added, “In our video it clearly shows demonstrators walking down the center of the streets to not impede any of the vehicles. None of these vehicles were surrounded, stranded or harassed. Posts claiming that TPR harassed people who did not approve of the protest are also not true. You can see in our video posted that when met with distain, protestors wished those people a Merry Christmas & Happy Holiday with of course the chant that ‘Black Lives Matter’ as they continued to march. Posts also claim that TPR was terrorizing children who were looking at the holiday decorations. In the video posted by us it clearly shows families, both black and white with children showing full support for the group with parents and children yelling black lives matter.”

Previously People’s Revolution protests have erupted into violence; a member of the group is charged with a felony for discharging a gun at former police officer Joseph Mensah after people trespassed on his girlfriend’s private property.

U.S. Senate to Biden: No to Private Sector Vaccine Mandate