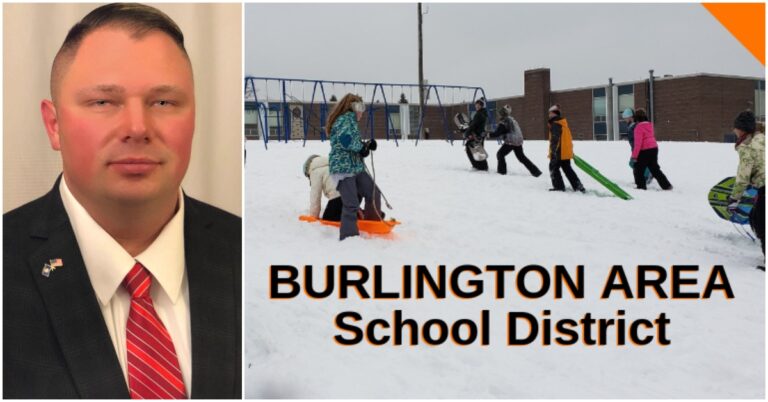 A Burlington School Board member is proposing a resolution to prohibit curriculum and teacher training in Critical Race Theory, The 1619 Project, and “Action Civics.”

In addition, the resolution would require that America “must be celebrated – this must be taught throughout varied instructional outcomes.”

We obtained a copy of board member Taylor Wishau’s draft resolution, and he informed us that he officially submitted it on May 24, 2021. In an interview with Wisconsin Right Now, he said, “I’d like the ban to occur in Burlington; I’d like the state to take action as well.”

He also forwarded the resolution to the Wisconsin Association of School Boards, writing, “I would like to submit the following resolution for consideration for the 2021 WASB School Board Convention. I understand the BASD Board would need to vote to adopt this resolution first, then submit it to the WASB before September 15th, 2021. This would then be considered at the Policy and Resolutions Committee and if passed there, it would be brought up for a vote at the Delegate Assembly during the convention.” 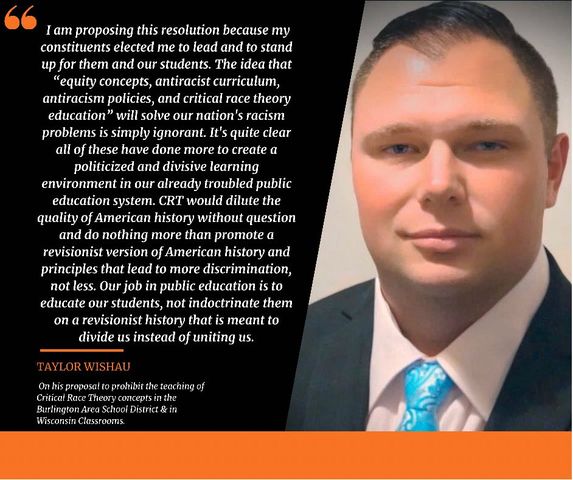 Wishau explained, “I’d really like this statewide to protect all students. Quite frankly, the WASB aspect is really a bonus in all this if it ever got to that point. Getting WASB to take a stance on this to advocate to the state legislature to craft legislation would be HUGE, but I don’t see it happening sadly.”

According to EdWeek, there are moves in state legislatures across the country to ban CRT; we’re told that the Wisconsin Legislature may consider a proposal to do that soon. 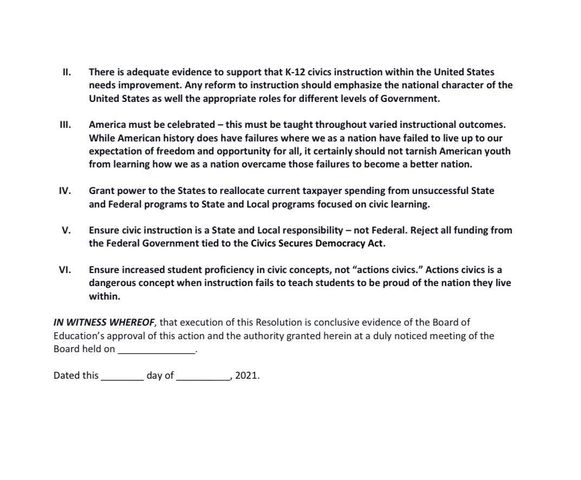 What is Critical Race Theory?

EdWeek explained that CRT “is an academic concept that is more than 40 years old. The core idea is that racism is a social construct, and that it is not merely the product of individual bias or prejudice, but also something embedded in legal systems and policies.” The conservative Heritage Foundation has joined the rising chorus of conservative voices against CRT.

“Critical Race Theory (CRT) makes race the prism through which its proponents analyze all aspects of American life—and do so with a degree of persistence that has helped CRT impact all of American life. CRT underpins identity politics, an ongoing effort to reimagine the United States as a nation riven by groups, each with specific claims on victimization,” Heritage wrote.

The Burlington resolution urges the creation of legislation to prohibit such curriculum and teacher training “from being taught or implemented in Wisconsin classrooms.” Included on the list: Civic engagement, project-based civics, and Critical Race Theory concepts and the Civic Secures Democracy Act.

According to Wishau’s resolution, Critical Race Theory (or CRT) “is an academic discipline that holds that the United States is a nation founded on white supremacy, patriarchy, and oppression and that these forces are still at the root of our society.”

Burlington has been the focal point of highly contentious and public disputes over race; more recently critical race theory has generated citizen and parental activism all over the state among conservatives, leading some to topple incumbents in school board races. According to the Racine Journal Times, in April, Burlington voters elected two candidates backed by the Republican party, a candidate who ousted an incumbent and Wishau, who was re-elected.

In April, the state Department of Instruction ordered Burlington to fix what it called a “hostile” racial environment, according to Fox 6. The television station reported that the state’s report “lists 19 cases of racial harassment from 2016 to 2020.”

Former Lt. Gov. Rebecca Kleefisch, a presumptive candidate for governor as republican, recently wrote a column for Wisconsin Right Now calling on the Legislature and Gov. Tony Evers to ban Critical Race Theory from being taught in classrooms. CRT has provoked controversy in many states and cities throughout the country. The 1619 project was a controversial series published by the New York Times that seeks to reposition the date of America’s founding; some historians have been very critical of some of its conclusions.

According to Wishau’s resolution, “CRT believes that the existing state of inequitable distribution is the product of institutionalized white supremacy and economic exploitation. CRT’s key analytical and rhetorical framework is to portray every instance of racial disparity as evidence of racial discrimination. CRT results in people looking for ‘power imbalance, bigotry, and biases that it assumes must be present,’ which reduces everything to prejudice, ‘as understood under the power dynamics asserted by Theory,’” he wrote.

The Civics Secures Democracy Act, according to Wishau, “is meant to politicize students by teaching them to turn away from equality and individual liberty for the allure of identity politics and the redistribution of everything. The bill also looks to rejuvenate a national test that would be used as a backdoor for a national curriculum in all the States. Thus, forcing national curriculum standards on states and local municipalities would yield potential disastrous financial implications as scores would be tied to the awarding of federal grants. The bill would increase and regularize national assessments in history and civics, facilitate state by state comparisons, and condition grants on the willingness of a state to participate in the history and civic portion so the test on a regular basis.”

The resolution states that CRT curriculum “distracts both educators and students from rigorous learning content, while also teaching ideas that undermine the value of individual liberty and America’s founding ideals and further embed the concept of systemic racism in the public conscious. These distractions come at a time when state and local officials do not require enough civics-related instruction in school, and there are wide learning gaps in core subjects like reading and math between children from different ethnicities – all subjects that need more, not less, attention. We must teach a robust curriculum that enforces critical thinking skills free of bias and teaches ALL American history. American history is OUR history no matter your race, color, religion (creed), gender, gender expression, age, national origin (ancestry), disability, marital status, sexual orientation or military status, in any of its activities or operations.”

America “must be celebrated – this must be taught throughout varied instructional outcomes. While American history does have failures where we as a nation have failed to live up to our expectation of freedom and opportunity for all, it certainly should not tarnish American youth from learning how we as a nation overcame those failures to become a better nation,” it states.

It urges the granting of power to the States to “reallocate current taxpayers spending from unsuccessful State and Federal programs to State and Local programs focused on civil learning.”

It would ensure “civic instruction is a State and Local responsibility – not Federal. Reject all funding from the Federal Government ties to the Civics Secures Democracy Act.”

Finally, the resolution would ensure “increased students proficiency in civic concepts not ‘action civics.’ Action civics is a dangerous concept when instruction fails to teach students to be proud of the nation they live within,” the resolution says.

The resolution, if approved, would state that the “execution of this Resolution is conclusive evidence of the Board of Education’s approval of this action and the authority granted herein.”

We asked Wishau a series of follow-up questions. Here are his answers:

Why are you proposing this?

“I am proposing this resolution because my constituents elected me to lead and to stand up for them and our students. The idea that ‘equity concepts, antiracist curriculum, antiracism policies, and critical race theory education’ will solve our nation’s racism problems is simply ignorant. It’s quite clear all of these have done more to create a politicized and divisive learning environment in our already troubled public education system. CRT would dilute the quality of American history without question and do nothing more than promote a revisionist version of American history and principles that lead to more discrimination, not less. Our job in public education is to educate our students, not indoctrinate them on a revisionist history that is meant to divide us instead of uniting us.”

“As an elected member of the Board of Education, I believe the following: School Boards set goals, create, set, and approve policies, adopt/review the curriculum, set budgets, hold the administration accountable, and oversee administrative aspects for our local schools. We also serve as a direct line of communication from the community to the school. It has been made abundantly clear throughout our entire country and local community that parents are fed up with this type of curriculum being pushed on their children without a choice or say in the matter. American is NOT a racist country – Burlington is NOT a racist community.”

Is the district teaching this now?

“This resolution is more of a preventative measure, but also to send a strong message that I, as an elected board member, will not tolerate this type of curriculum being used or implemented within my school district. I believe we must teach a robust curriculum that enforces critical thinking skills free of bias and teaches ALL American history (the good & the bad). American history is OUR history no matter your race, color, religion (creed), gender, gender expression, age, national origin (ancestry), disability, marital status, sexual orientation, or military status, in any of its activities or operations.”

“However, it was brought to my attention a survey regarding ‘microaggressions’ was administered to students across the Burlington Area School District without parental consent. A response I have seen from the administration was ‘when the questions are relatively inconsequential, we don’t seek consent.’ In our current climate, I fundamentally disagree with this statement. The school district has a policy (POLICY 2416 – STUDENT PRIVACY AND PARENTAL ACCESS TO INFORMATION) that I submitted amended changes to in hopes of passage which would give the parent more of a say in their child’s education.”

Do you think it will pass?

“Unfortunately, No… but I refuse to let that stop me. This is way too important.”

“The rationale here is to submit this resolution to my board for consideration of adoption within our school district and for other school districts across the state to do the same. The goal would be to have this submitted as a resolution to the Wisconsin Association of School Boards before the September 15th, 2021 deadline the WASB has set. If enough boards bring this resolution forward and the WASB takes this seriously, I believe it would then go to their resolutions committee for consideration. If approved there, it would then go for a vote at the annual Wisconsin Association of School Boards convention in January where the ‘general assembly’ would vote on it. If passed, it would then instruct the WASB to lobby the WI State Legislature to craft legislation around this resolution.”

Although he also wants boards to tackle the issue locally, he added, “To be blunt though… we need the state legislature to step up and act on all of this.”

He said some people in the Legislature believe a ban would be pointless to pass because Evers could veto it.

“… that is not an excuse for standing up for the children of this state and our country. The time to join our fellow states (OK, ID, NH, WV, IA, UT, RI, TX) in crafting legislation to ban this reprehensible ‘education’ is now. The legislative templates are there, the legal minds to draft the legislation is there… the time to act is NOW.“

He noted: “I have lobbied over 80 Republican lawmakers in Wisconsin to act on this issue and have had only 4 responses…. Yes… only 4. The excuse of ‘you don’t live in my district, so I won’t give you a reply’ doesn’t apply here when this issue is statewide in my opinion. Step up like I am by defending our Wisconsin youth and education system or be replaced… it’s a simple concept.”