Amanda Avalos, Mayor Tom Barrett’s latest nominee to the Milwaukee Fire and Police Commission – who could help pick the next police chief – wants police abolished and has posted a string of anti-police and anti-MPD tweets in recent months, accusing police of making the community less safe by their very existence.

In one recent tweet, Amanda Avalos wrote: “46-49% of Milwaukee’s entire city budget gets consistently allocated to the police department. Abolish the police.”

Amanda Avalos’s nomination was heard it on the afternoon of Dec.  8 by the Public Safety and Health Committee.  Aldermen unanimously voted to table the vote until after a community listening session on the nomination Saturday. That session is virtual.  “City of Milwaukee invites city residents to join a virtual community listening session on December 12, 2020 from 10 a.m. to 1 p.m.,” the notice for the session says. You can register for it here.

Avalos called for racism to be declared a statewide emergency and for 25% of the Milwaukee Police Department, Milwaukee County Sheriff’s Office, and State Patrol’s budgets to be moved to “public health equity.” She also declared that “white supremacy exists everywhere” and demanded that “white and non-Black POC” dismantle anti Blackness, including “at home with your problematic family members.”

According to her LinkedIn page, Amanda Avalos is the senior civic engagement director for Leaders Igniting Transformation (LIT). LIT was a “leading proponent” of an effort to get the Milwaukee Common Council to cut 25% from the Milwaukee Police Department’s budget, according to Urban Milwaukee. The group also successfully lobbied Milwaukee Public Schools to end its contract with the MPD. According to Urban Milwaukee, Amanda Avalos previously called for Chief Alfonso Morales to be fired. Read her resume here.

The Fire and Police Commission is the civilian oversight body that “oversees all aspects of Fire Department and Police Department operations,” including the hiring and firing of police and fire chiefs and some disciplinary actions against officers. The seven commissioners are appointed by Mayor Tom Barrett and must be confirmed by the Common Council. 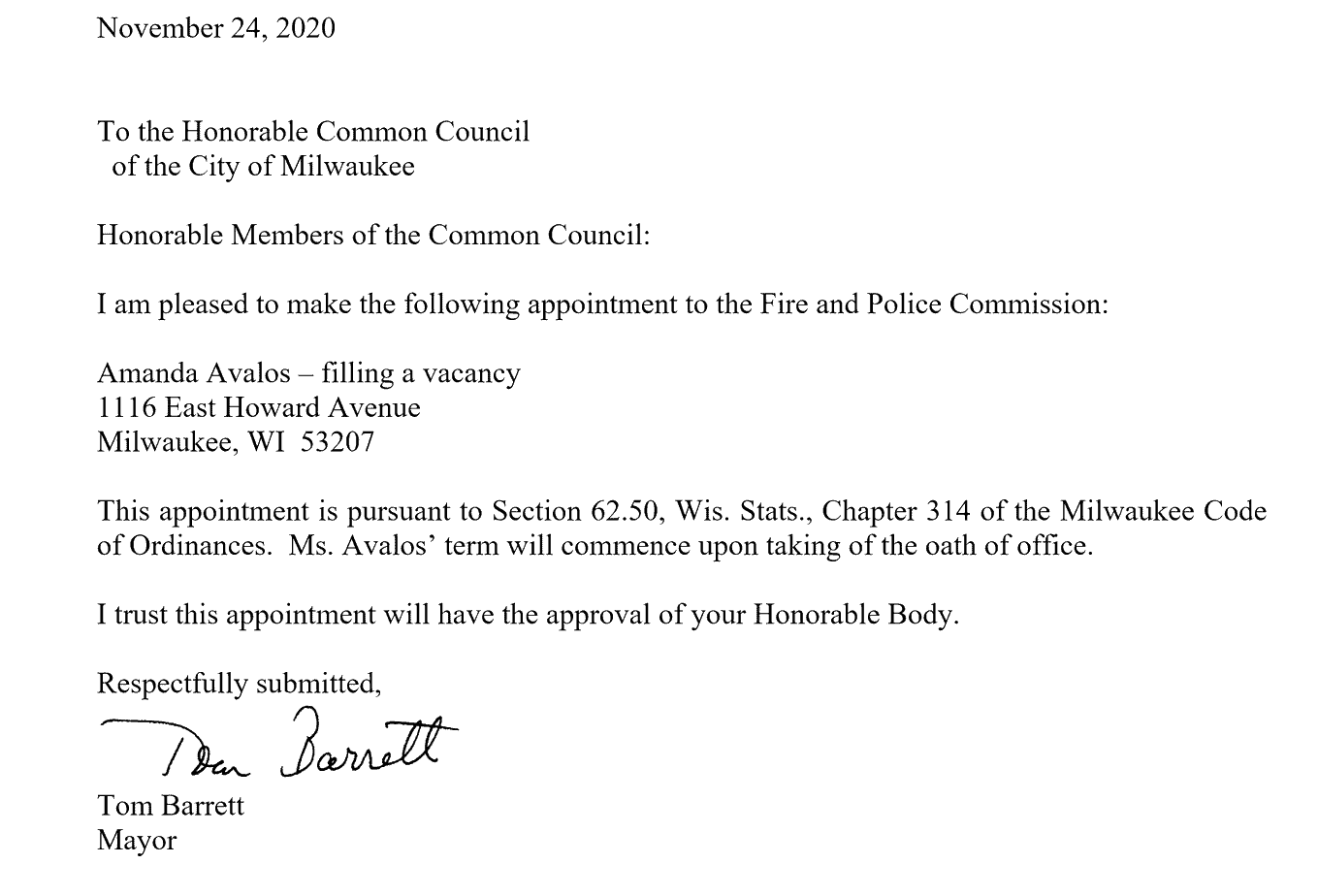 If the Council approves her nomination, she would break the Commission’s 3-3 tie over its choice for the new MPD chief, presuming no commissioners switch their votes before that time. If chosen, she would also have a vote on disciplinary appeals dealing with officers who are accused of misconduct, citizen complaints, and other matters.

Yet, she makes it clear in tweets that she harbors great animosity toward the Milwaukee Police Department and police in general.

On June 30, Amanda Avalos wrote, “It could be so simple. Universal healthcare, housing, and income standards. Add food, education, and internet access for all too. We’d still spend less than we currently are with the military and police budgets. And we’d be safer.”

She also called for a “transparent and public inventory of MPD’s military-grade equipment,” calling it a “good step.”

She accused MPD of “whining” about “the possibility of having to request military grade equipment from the Milwaukee Common Council before purchasing because of the threat of the ‘violent crowd that throws bottles.’”

She responded to a tweet that read “Milwaukee Police are currently proving why they needed to be defunded. They do not keep the community safe,” by writing that she considered it “true.” She added the hashtag #DefundMPD.

She congratulated MPS for cutting contact with MPD, saying “the youth won.”

Avalos has repeatedly sided with protests and riots that erupted after the death of George Floyd in Minneapolis.

In May, she retweeted a post saying that “this is not a riot. It is a rebellion” of people resisting “state sanctioned violence.”

She demanded that elected officials “announce their support of the protesters” and “prove it by adopting local budgets that are reflective of our demands: divesting from police departments.”

She declared that the “tired ol’ ‘Black on Black crime’ argument is inherently racist bc it was created in justification of police brutality.”

Avalos wrote, “There is nothing as violent as the police state. Power to the people.”

She explained that she’s a “proud” union steward and member of the Center for Popular Democracy Union.

State Bar of Wisconsin Wants Some of the $6.6 Billion Surplus for DA Offices, Public Defenders

Petitions Seek to Save Streets of Old Milwaukee, European Village

Up Against the Wall