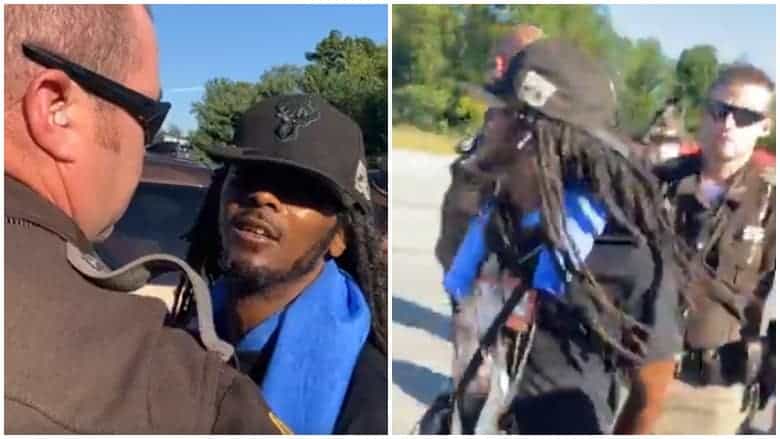 Two of Milwaukee’s most prominent activists – Frank Nitty and Tory Lowe – were arrested in Indiana on Aug. 12, according to a state Senator and a Facebook Live video posted by Milwaukee BLM leader Nitty.

State Sen. Lena Taylor (D-Milwaukee) shared the news on her Facebook page. “I am aware Frank, his son, and Tory Lowe got arrested for DC in Indiana. We are working on helping them,” Lena Taylor wrote on Facebook.”

Nitty posted a lengthy Facebook Live Video that shows an officer with the Indiana State Police asking the activists to not impede traffic in the road. The group of Milwaukee BLM activists has been on a march from Milwaukee to Washington D.C. According to social media posts, the arrests occurred in Warsaw, Indiana. The officer eventually handcuffs Nitty after repeatedly asking the group to stay off the road. “You’re impeding traffic. Now get out of the road. Are you going to get out of the roadway, yes or no?” the officer says in the Facebook Live video.

Eventually, the officer says, “Turn around,” and takes out handcuffs.

“You’re making a big mistake, sir,” Nitty says, claiming that people tried to hit the marchers with cars and were “throwing stuff at us in Indiana.”

This evening around 6:00 p.m. three protesters were arrested after intentionally obstructing vehicular traffic on US 30 in Kosciusko County. US 30 is a divided four-lane US highway with a speed limit of 60 miles per hour.

Area dispatch centers began receiving calls of traffic backed up for several miles in the eastbound lanes of US 30. Troopers made contact with a group of protesters walking along US 30 with eight support vehicles traveling at walking speed in the right lane creating a dangerous situation for the group as well as traveling motorists. At different times pedestrians would also walk in the travel portion of the roadway and not on the shoulder.

Troopers spoke to Frank Sensabaugh, the group’s leader, explaining that the group he was leading was creating a dangerous situation with both vehicles and pedestrians traveling at walking speed on US 30. Troopers explained to the group that they were welcome to continue on with both pedestrians and vehicles traveling on the shoulder. Purportedly the group failed to comply and continued walking eastbound with eastbound traffic continuing to back up for approximately seven miles.

The group was again approached on US 30 near CR 900 East where it was again explained that the group could not continue to travel in the right lane impeding traffic. After multiple attempts to gain compliance, Frank David Sensabaugh, age 30 of Milwaukee, WI, Eric Ajala, age 20 of Milwaukee, WI and Tory Lowe, age 44 of Milwaukee, WI, were arrested for misdemeanor charges of disorderly conduct and obstruction of traffic. Lowe was arrested for an additional charge of misdemeanor resisting law enforcement. All arrested were taken to the Kosciusko County Jail.

The Kosciusko County Prosecutor will review this case for all appropriate charges.

The group was back marching shortly thereafter; Fox 6 says Nitty bonded out of jail.

In the video, which you can watch above, the officer with the Indiana State Police says the group’s vehicles are impeding traffic in the roadway.

Nitty asks him to call his “superior officer,” but the officer says he is the superior officer int hat county. “I’m telling you to march on the side of the road,” he said, adding, “You will be detained” if they didn’t comply.

Nitty insisted, “Our constitutional rights let us walk down the street,” and says, “This has only happened in Indiana.” But the officer says he’s about to cause problems.

At that point, the group continues marching down the road, chanting Black Lives Matter.

Lowe is accused of trying to stop police from arresting Nitty.