The Wauwatosa Police and Fire Commission decided not to act at this time on two complaints against Police Officer Joseph Mensah in relation to the shootings of Alvin Cole and Antonio Gonzalez.

The Cole shooting is still under investigation by the District Attorney. As a result, the commissioners took no action on it during their Aug. 17 meeting.

“I don’t think it warrants us taking a discussion or decision at this point until such time as the investigation has been concluded and the DA has released its finding,” said Wauwatosa PFC Commissioner Greg Leahy.

Commissioners indicated the Gonzales complaint was vague and didn’t allege specific rule or policy violations, so they put that on hold too. A third complaint, by the family of Jay Anderson, is proceeding. The district attorney previously ruled Mensah’s actions in the Gonzalez and Anderson shootings justified self-defense.

Black Lives Matter activists and families of the deceased men want the commission to fire Mensah. Kimberley Motley, attorney for the Anderson family, which was given until Aug. 21 to amend the complaint, expressed outrage on Twitter.

“FPC HEARING TODAY IS AN ABSOLUTE DISGRACE!” she wrote on Twitter. “Scheduling order not reasonable. Our documents are being delayed to us by the WPD!!! This is the RIDICULOUSLY High Receipt that we received for open records $1320 by the WPD!!!! Chief Weber’s WPD is failing. YOUR legacy is tied to Officer Mensah – FOREVER!!! FPC we are entitled to due process!”

The Wauwatosa Police and Fire Commission meeting unfolded at 5 p.m. via a Zoom meeting regarding discussion and “possible action” against Mensah regarding the citizen complaints against him. On the agenda:

The meeting was initially scheduled for last Friday at 11 a.m., but cancelled due to a technical issue with the Zoom platform. The format of the meeting is quasi-judicial, so there are no public comments during the meeting.

Here is the entire agenda packet including the actual complaints filed against Officer Mensah.

According to Patch.com, The Police and Fire Commission voted on July 15, 2020 to appoint former U.S. Attorney Steven M. Biskupic from the law firm Biskupic & Jacobs, SC to independently investigate officer Joseph Mensah, who was involved in three fatal police shootings over the past five years. The investigation may take up 60 to 90 days.

Police say all three men shot and killed by Mensah had weapons, and Alvin Cole fired at Mensah first, which the family disputes. Black Lives Matter protests have focused on the city, with one culminating at Mensah’s girlfriend’s house; he and his girlfriend say they were assaulted and shot at. That incident is under investigation. The mayor’s and police chief’s homes have also been targeted by protesters, who have called for Mensah’s termination. The FPC previously suspended him (he says it’s not clear why) and the mayor and Common Council supported a resolution calling for his termination, although that’s in the jurisdiction of the FPC.

According to Police and Fire Commission documents, the Commission has set a series of deadlines. People have until Aug. 21 to file any amendments to their citizen complaints/charges against Mensah; responsive documents must be filed by Aug. 28; submissions to the independent investigator must be made by Sept. 4, the independent investigator’s report must be filed by Oct. 19.

The Hearing Unfolded Live Via Zoom

A member of the Facebook group called “The Peoples Revolution”, posted:

Monday August 17th we’re meeting at the Wauwatosa City Clerk back parking lot at 4pm (7725 W. North Ave.) We will have a group viewing of the Police and Fire Commission Zoom meeting pertaining to Joseph Mensah. The meeting starts at 5pm and we will be marching afterwords. I very much hope it’s a celebratory march.

He also posted the below poster: 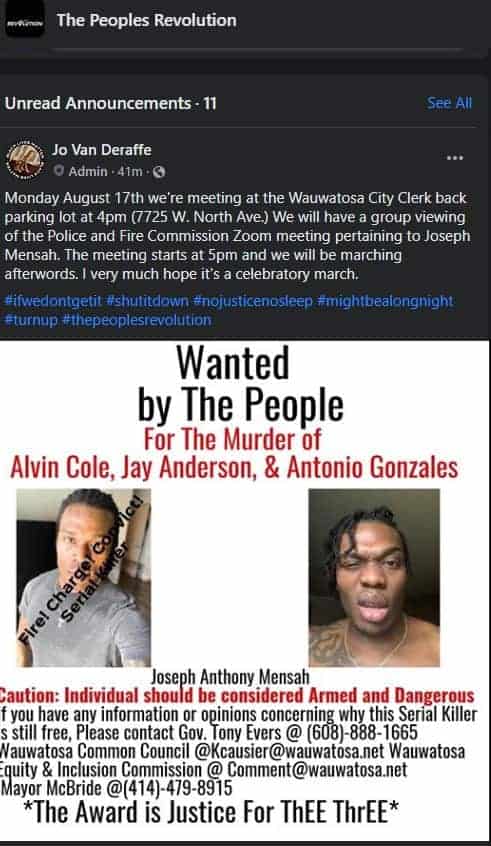