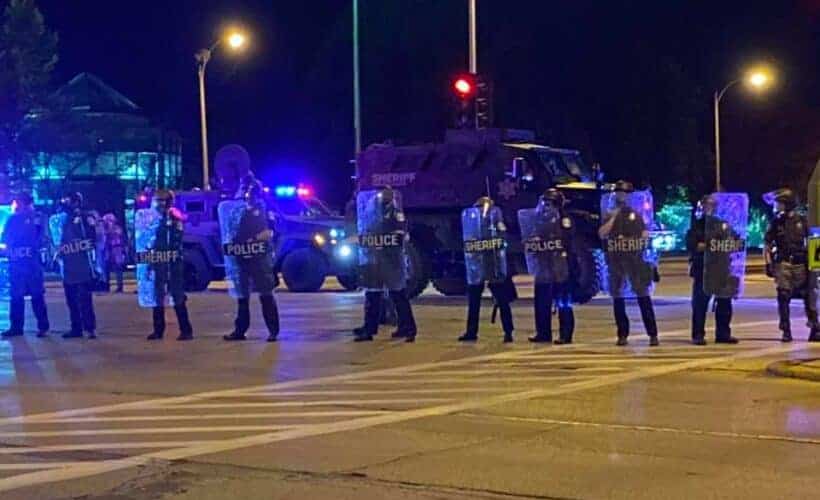 Wauwatosa police Oct. 9 update for events related to protesting/rioting include:

Here is the release from Wauwatosa Police:

At 5 p.m. on October 9, a group of about 60 to 75 people congregated outside Wauwatosa City
Hall on the north lawn. At 5:20 p.m., a group of approximately 30 cars and 30 additional people left
the area of 27th and Center Street and proceeded westbound on Center Street. By 5:32 p.m., this
group grows to approximately 50 vehicles and continues westbound on Center Street. Both crowds
continue to grow and by 6:11 p.m., approximately 50 additional people joined the group now at 50th Street and Center Street. Based on the size of the crowd, Wisconsin National Guard deployed. The group on Center Street begins to block all lanes of traffic while continuing westbound.
At 6:15, the group in front of City Hall moved in a circle around the intersection, crossing with the
lights in the crosswalk. Two people stood in the crosswalk holding a banner in the crosswalk
blocking southbound traffic on Wauwatosa Avenue. These individuals with the banner on
Wauwatosa Avenue received a warning to disperse. They failed to leave the intersection. Law
enforcement personnel took these two protesters in the intersection into custody.

At 6:50 p.m., the Center Street group merges with the group at City Hall, forming a crowd of
approximately 100 people and 20 vehicles. Law enforcement personnel authorized the use of
chemical (tear gas) and less lethal munitions (pepper balls and paint balls) in self-defense only as
small children were present in the crowd. Further, the crowd was given additional time to disperse
before making arrests.

At 7:00 p.m., the curfew went into effect. Vehicles fanned out and blocked North Avenue and
Wauwatosa Avenue. Blocking an intersection is not lawful conduct.

At 7:40, one protester advanced towards the police line. Law enforcement personnel took the
individual into custody without incident. At 7:51 p.m., a protester inside the group posts a photo of
himself holding a handgun while inside the group gathered.

Fifty-two minutes after the initial announcement of an unlawful assembly, law enforcement
advanced towards the crowd in order to have them disperse. At 8:06 p.m., members of the group
throw rocks and bottles at law enforcement personnel. Law enforcement command staff authorized the deployment of chemical munitions (tear gas) and less lethal munitions (pepper balls and paint balls) in self-defense.

At 8:07 p.m., law enforcement deployed tear gas and the crowd moved to the east. Members of the
group attempted to block the street with dumpsters and other items at approximately the 7200 block of W. North Avenue. At 8:20 pm, law enforcement personnel observed that the group attempted to set something on fire in the 7200 block of W. North Avenue, but the group was not successful.

Members of the group broke the windows at Snap Fitness located at 7212 W. North Avenue. Law
enforcement took six people into custody who had attempted to start fires. Several minutes later,
law enforcement personnel took one additional individual into custody who was in possession of
burning materials, including lighter fluid.

Between 9:00 and 11:00 p.m., the crowd continued to leave eastbound on North Avenue.
A protest group with approximately 20 vehicles stopped at the West Allis Police Department at 9:54
pm.

At 12:47 am on October 10, this group of vehicles departed the West Allis Police Department.
Three vehicles arrived at the Wauwatosa Police Department at 1:15 am and a member of the group
demanded the release of prisoners. There were no individuals in custody at the Wauwatosa Police
Department. Two of the three vehicles peacefully dispersed after a few minutes. One vehicle fled
the scene, almost striking a Wauwatosa Police Detective. Law enforcement personnel apprehended
the driver after a short pursuit. This occurred after the individual had gotten into a second vehicle
that was a stolen vehicle. Law enforcement personnel recovered a gun as well as the stolen vehicle.
Law enforcement personnel arrested twenty-eight adults. Two of the arrests were felony arrests, one was a misdemeanor arrest, and twenty-five municipal arrests. The Wauwatosa Fire Department evaluated two adult arrestees for minor injuries.

Law enforcement personnel recovered a handgun, materials to start fires, and a stolen vehicle.
We can appreciate the anger and frustration that exists among those closely affected by recent
events. We continue to ask that all citizens comply with the emergency order in place by remaining
away from City of Wauwatosa public spaces during the hours of 7:00 pm and 6:00 am each night to
ensure the safety of all members of our community. This order expires on Monday, October 12 at
6:00 a.m.