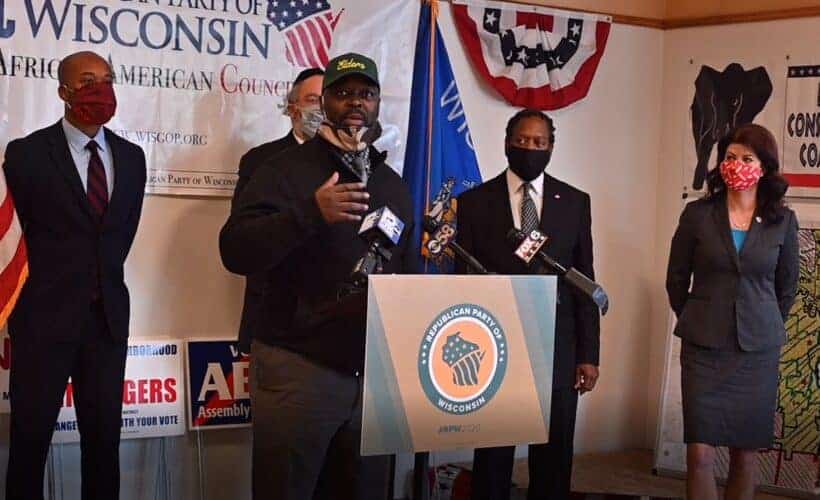 The Republican candidates who are squaring off against Milwaukee Democrats who are refusing to appear at the NAACP debate slammed the Democrats for not being willing to discuss the issues, calling it a “slap” in the face, disrespectful, and a disservice to voters.

Tim Rogers, who is running against Democrat U.S. Rep. Gwen Moore, “The Democrats not wanting to participate is a slap in the face of our community. They say they care about the community. They take us for granted for our votes. They’ve been doing it for years. It’s time to bring that to an end, and to hear us.” 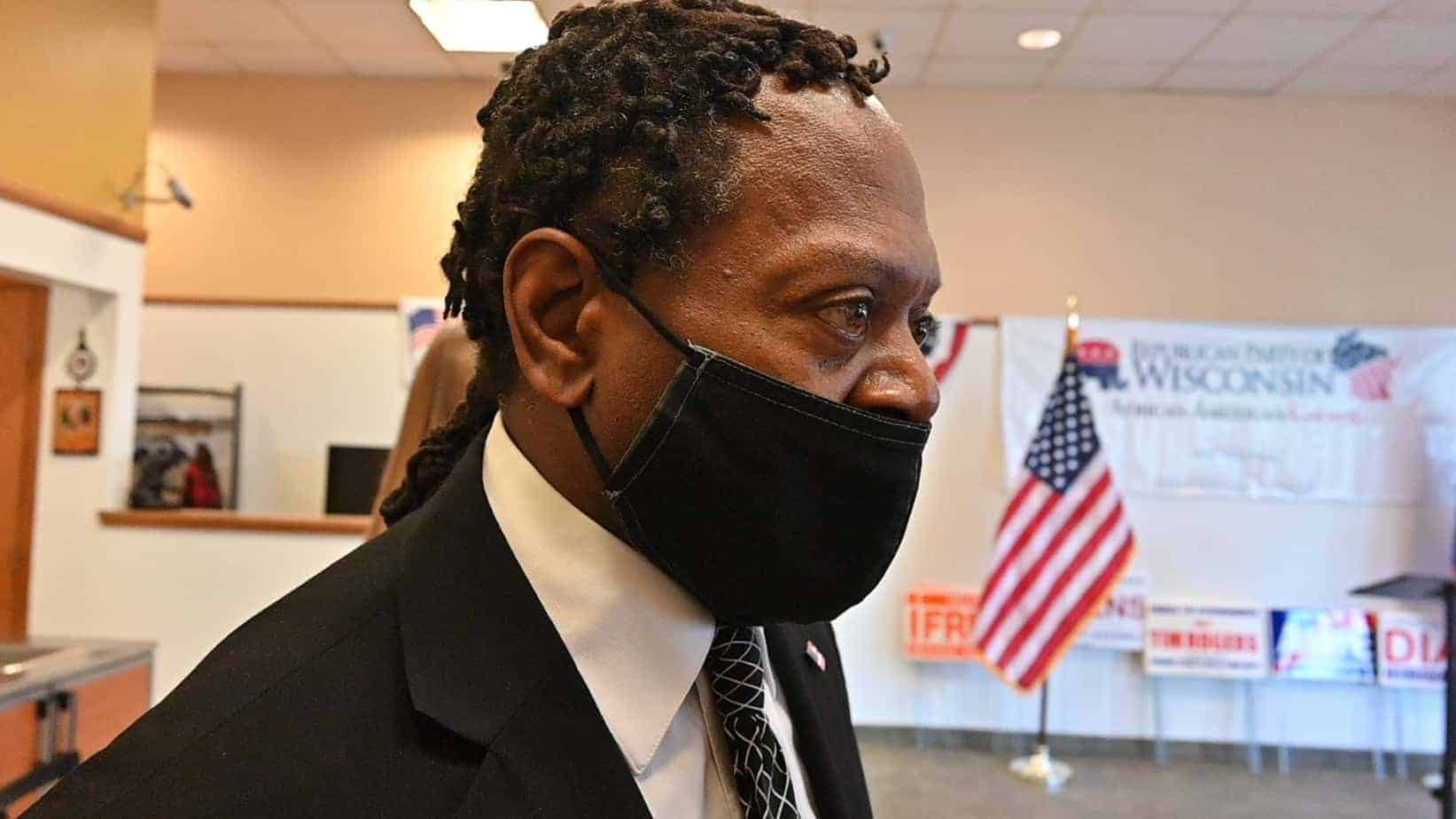 Wisconsin Right Now previously broke the story that five Milwaukee Democrats, including U.S. Rep. Gwen Moore, declared in a letter that they will not show for the debate. On Wednesday, at the state Republican Party’s new office in the heart of the central city, their challengers held a press conference to call on the Democrats to debate. It comes amidst a major new outreach effort by the state GOP into Milwaukee’s African-American community that involved recruiting the slate of Black Republican candidates, opening the office, holding events, and other measures.

Alciro Deacon, who is running as a Republican against State Sen. LaTonya Johnson (Senate District 6), said: “For me not showing up for a debate with the NAACP is unconscionable. We are living in the hub of black and brown disparities.” He said the NAACP for years has “fought for black and brown people.” He called it “unacceptable,” for people to decline to discuss the “issues of the people,” adding, “We need to come together. We need to talk. We need to figure these things out together.” He said Debates are a way to come together and “find new solutions to help the community.”

He added that the “diversity of opinion is very vast” in the black community.” He said voters just want people who will “get the job done and represent them.” 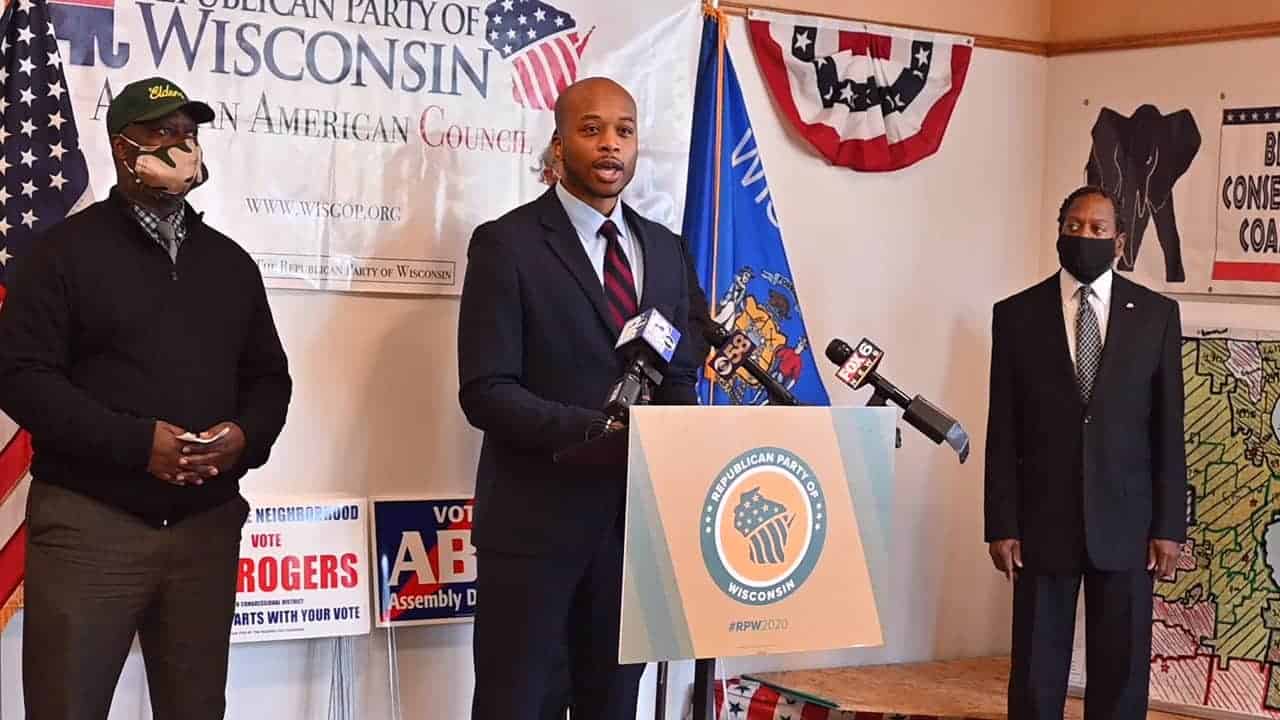 Republican Orlando Owens said his opponent for the Assembly District 11, Dora Drake, had “failed to come to the good people of Milwaukee… This is about the opportunity to present yourself as a candidate or for reelection, your ideas for the future and how you’d address them. You owe it, you owe it to the community, this African-American community about what you want to see our plans for the future in our community. That’s your obligation. It’s part of your job, to present yourself to the people.”

Owens said: “I find it disrespectful.” 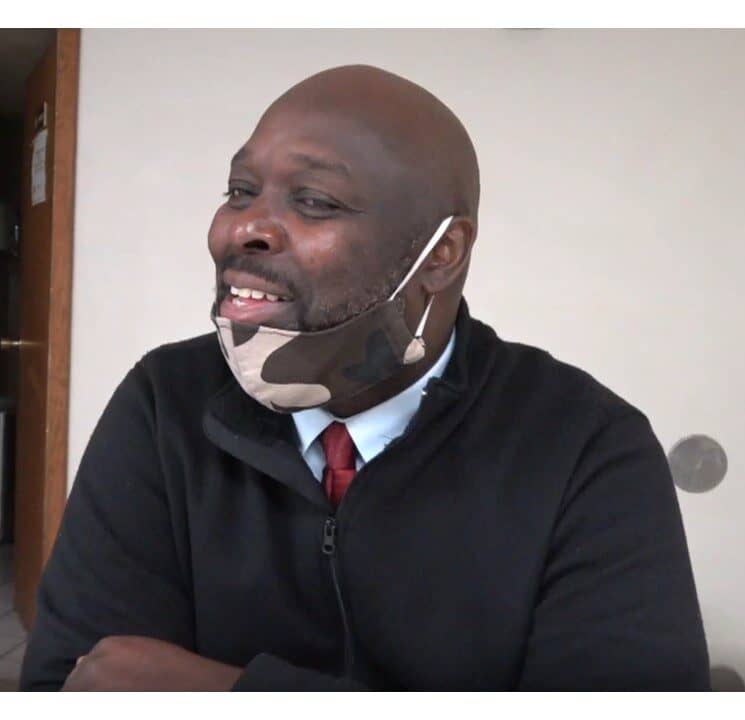 The debate is going on in a virtual format with or without the Democrats. 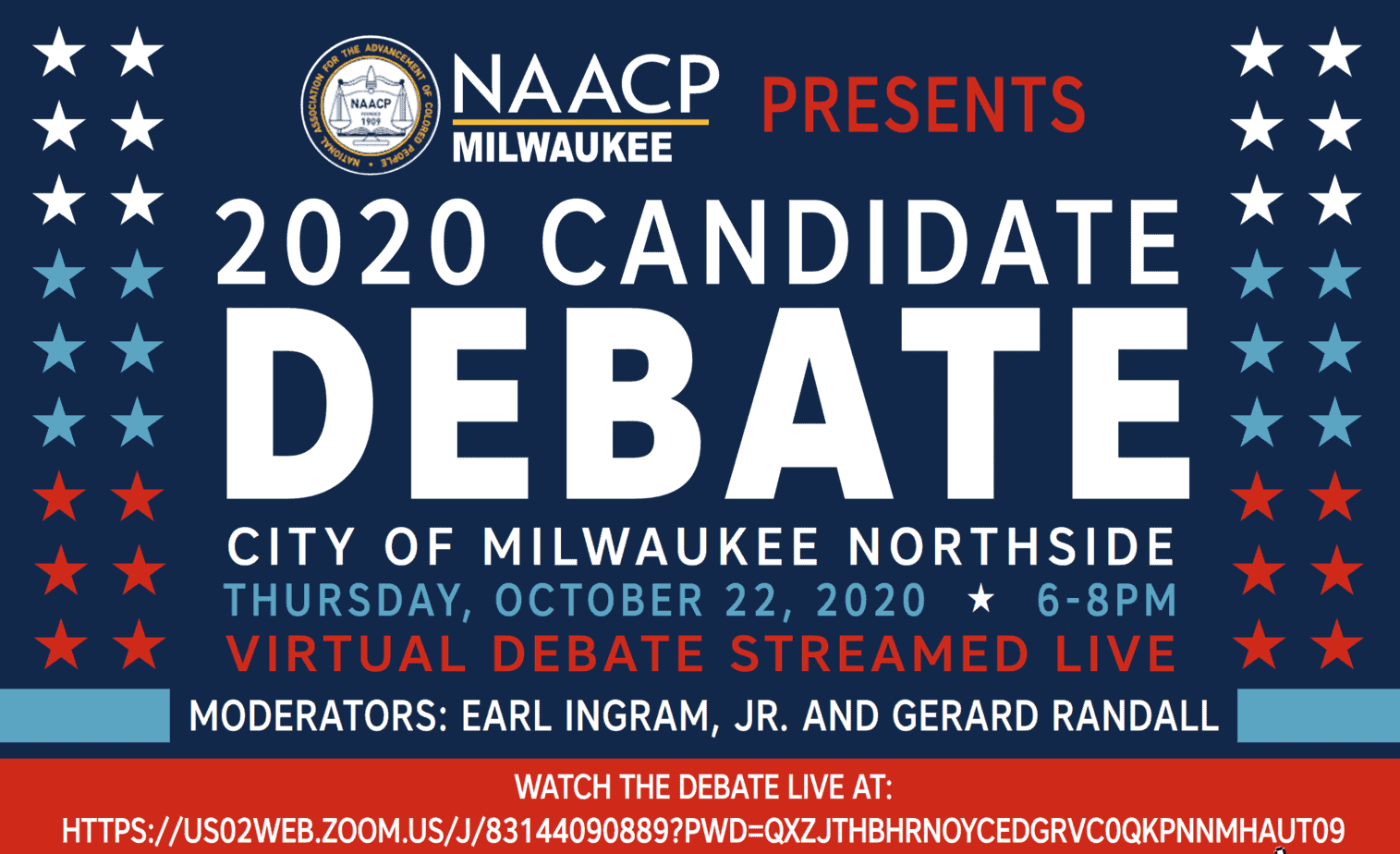 Former Lt. Gov. Rebecca Kleefisch said the candidates “just want to have an exchange of ideas. Democratic opponents are unwilling to have a civil conversation.” She called it disrespectful to the NAACP and to the candidates “who are out there working hard every idea” to “usher in a renaissance to Milwaukee.” She said it was also disrespectful “to the voters.” 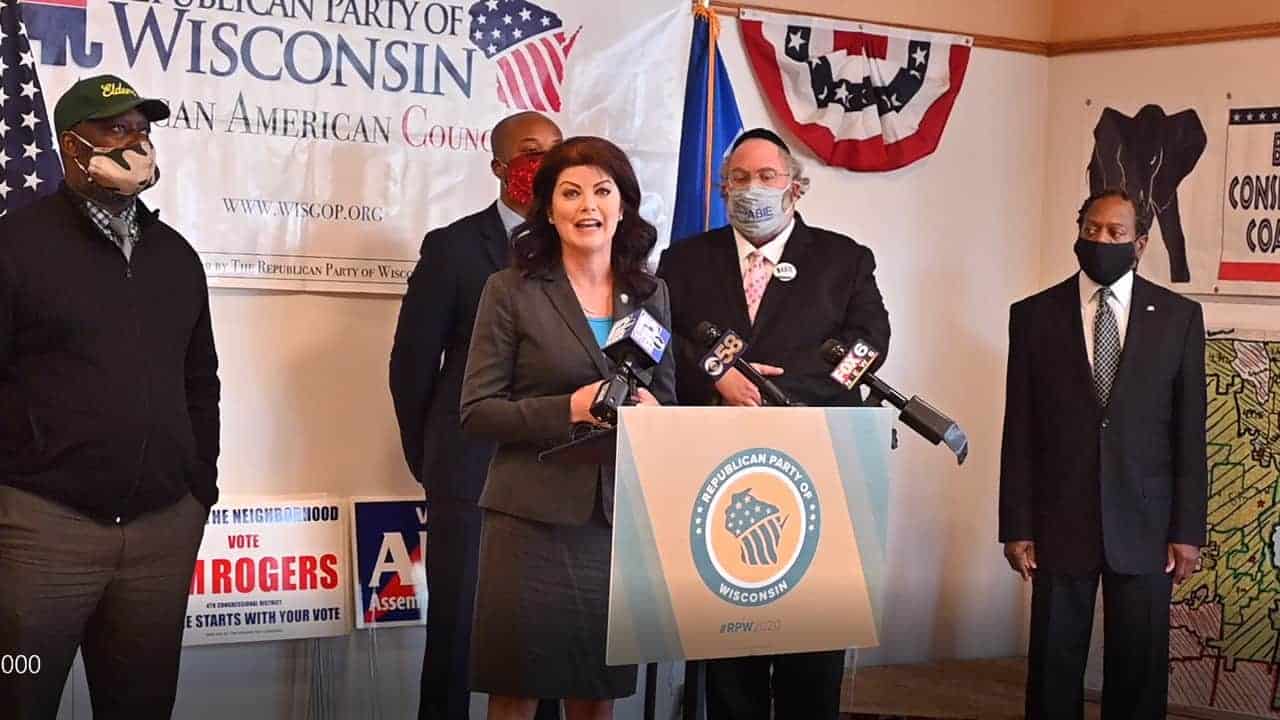 Republican Party State Chairman Andrew Hitt said Republicans opened “this office in the heart of the Bronzeville neighborhood because we want to be part of this community.” He said it is important to debate the “issues of the day and the different policy choices and decisions.” He said “it’s tragic that so many Democrats” won’t debate “our candidates. It’s unacceptable for the others to decline to debate these candidates; these candidates who have stepped up.”

The candidates seeking to debate the Democrats at the NAACP event also include Dennis Walton, who is running as an independent against Haywood. Walton, Rogers, Deacon, and Owens are black. All but Walton were at the Wednesday press conference.

“It’s sad for the city of Milwaukee, that they won’t even bother to show up for this debate,” said Abie Eisenbach, calling it an honor and privilege to be invited to the NAACP debate. Eisenbach is running for State Assembly District 17.

The letter from the five Democrats is on the letterhead of the Milwaukee County Democratic Party and is addressed to the NAACP Milwaukee branch president. Read the Democrats’ letter in full here. It starts, “Unfortunately, we must respectfully decline the NAACP’s invitation to attend the planned NAACP-Milwaukee Northside Debate 2020.”

Two Democratic candidates said they would go, according to an NAACP flyer: LaKeshia Myers and write-in Michelle Bryant.

The five who wrote that they will refuse to attend the NAACP debate outlined a list of reasons, including COVID-19 and the NAACP’s Milwaukee Branch Political Action Committee Chair, Chris Johnson, doing political consulting work for a black Republican (Owens) who would be at the debate. However, the debate would have been moderated by two prominent and respected black Milwaukeeans, who each represent different sides of the political equation (talk show host Earl Ingram, who most people consider leaning toward the Democratic side, and Republican Gerard Randall.) Fred Royal, the president of the NAACP, told Wisconsin Right Now’s Jim Piwowarczyk that the NAACP was moving the debate to a Zoom/virtual format to alleviate any COVID-19 concerns. Royal added, “I try not to debate on people’s opinions on social media.”

“The debate is not off; it is virtual,” Royal wrote previously. “I think it is important to hear all candidates. As you know there are many political parties register(ed) in this country.” He attached a letter of apology the NAACP sent to the Democratic candidates, referring to a “terrible breakdown in communication.” However, he did not respond when asked who is attending the virtual debate and whether the five candidates who wrote the letter have changed their minds. That apology letter does state: “I understood that the debate was designed to be fair and balanced, with the moderators having party affiliation with Democrats and Republicans.” You can read the letter in full here: Letter of Apology.

“He’s not the moderator. He’s purely just the organizer of the event,” Owens said of the chair, Chris Johnson, who runs an investigative website named Kingfish.

The Democrats’ letter called the plan to “appear in person” even with streaming to the audience “incredibly dangerous and irresponsible” due to the COVID-19 pandemic. However, as noted, the NAACP was then willing to hold the debate virtually via Zoom.

The letter then lists a series of attacks against Johnson, objecting to the “partisan affiliation of the organizer of this event.”

Johnson responded in a previous statement to Wisconsin Right Now:

There is no conflict of interest or bias as it pertains to my involvement as Political Action Committee Chair and organizer of the NAACP-Milwaukee Branch’s NAACP-Milwaukee Northside Debate 2020.

While it is true that I have a private business venture that has provided consulting services for a variety of clients with different political party affiliations including Democrats, Republicans, Independents and others in the past; this does not compromise this venerable civil rights organization from conducting a non-partisan debate nor would it prohibit the debate from being fair and balanced.

All Milwaukee north side candidates running for office during this election cycle that had an opponent were invited to participate in the debate. There are two politically respectable and knowledgeable moderators, one well known Democrat and one well known Republican. I am a volunteer to the NAACP-Milwaukee Branch and have received no compensation from anyone to organize or coordinate this candidate’s debate.