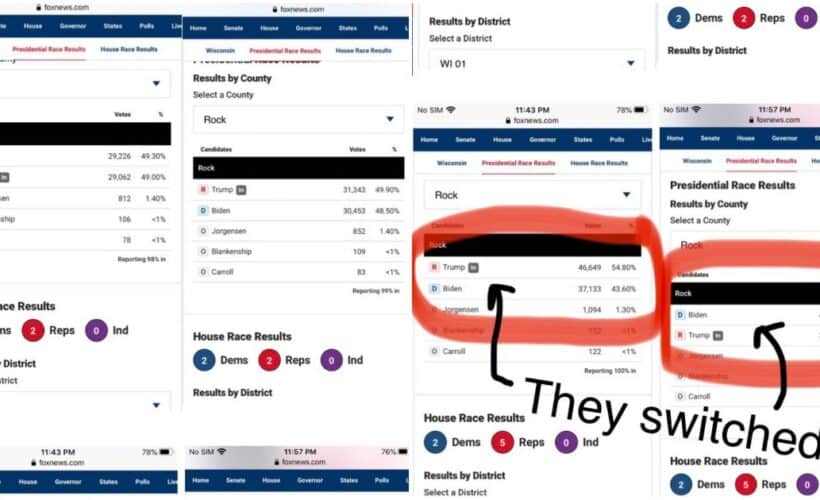 This would be a big development in a close race, so we dug into it some more to see what happened.

may have also happened in Rock County WI. My sister captured the screen shots on election. Apparently other people in Rock County WI Craught the switch as well. 👍👍 pic.twitter.com/WmKbLJr4yY

The screenshots run in the Gateway Pundit story shared by the president’s son also appear to show the results were from Fox News.com.

We reached out to Fox News. They stated the data on their site came from the Associated Press. “Referring you to AP as it was their data,” Carly Shanahan of Fox News’ media relations office told us. We reached out to AP as well.

Patrick Maks, media relations manager for the Associated Press, got back to us. He said:

There was a brief technical error in AP’s collection of the vote count in Rock County, Wisconsin, that was quickly corrected. AP has myriad checks and redundancies in place to ensure the integrity of the vote count reporting. We are confident in what we have delivered to customers.

The Wisconsin Election Commission advised the public, “Minor news media errors in reporting Wisconsin’s unofficial results do not affect the outcome of the election.”

“Several people have contacted us about discrepancies they may have seen in unofficial results on media websites or TV broadcasts on Election Night,” Election Commission chief Meagan Wolfe said. “They believe that these reporting errors are evidence that vote totals were somehow changed or flipped. Nothing could be farther from the truth.”

Wolfe explained that Wisconsin “does not have a statewide system for reporting unofficial results on Election Night, and there is no central official website or feed where results are reported,” the news release stated. “State law requires that counties post the unofficial election night numbers for each polling place. The unofficial statewide and county results numbers that the public sees on Election Night and the days thereafter come from the news media, including the Associated Press, which collects them from the 72 county clerks’ websites.”

Tollefson said the clerk’s office did review the final numbers and confirmed the numbers displayed on their website are correct as of November 10 which shows Joe Biden with 46,649 (54.66%) and Donald Trump with 37,133 (43.51%) of the votes.

The story hit Gateway Pundit, which alleged that an “individual” who wasn’t named in Rock County alerted the site to the error. “…at 11:43 more votes came in and they showed Trump had taken a commanding lead at 46,649 to Biden’s 37,133. This was a 9,516 vote lead for Trump,” Gateway Pundit wrote.

“But then suddenly at 11:57 these votes had swapped. Biden was reported with 46,649 and Trump was reduced to Biden’s former total of 37,133. These votes had swapped from the President Trump to Biden – again a swap from a Republican to a Democrat. The net impact was 19,032 votes.”

This would almost be enough to erase Biden’s margin in Wisconsin.

Again, though, the clerk claims this was a transposing error by the news media – not the clerk’s office – and that the Biden lead reported by Rock County is correct.

The Rock County, Wisconsin 2020 presidential results are generally consistent with what unfolded there in 2016.

We reached out to Fox New for comment. We will include their response if we get one.