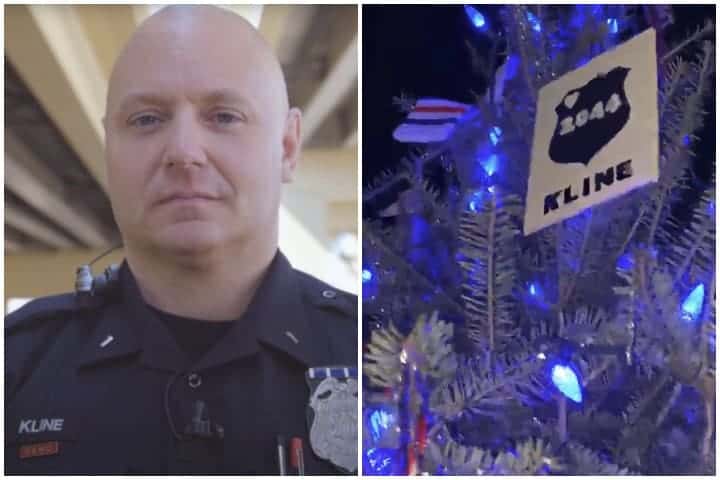 Tom Kline was greatly respected for his outreach work with homeless people.

A Christmas tree memorial put up as a tribute to beloved Milwaukee police officer Tom Kline was desecrated with a BLM flag. We spoke to a former Milwaukee police officer who was one of Kline’s close friends. She told us that she cleaned up everything the next day and found broken lower tree branches, fallen ornaments, cigarette butts right next to the memorial tree and a “trampled on” family-heirloom tree skirt.

She didn’t think the damage was intentional but rather that it, and the flag draped over the memorial Christmas tree, occurred as part of a major protest/event that Black Lives Matter and the People’s Revolution held in front of the tree to celebrate their 200th day of marching. She did think it was disrespectful and amounted to “desecration” of the memorial Christmas tree. In addition, she says that some of the hand-crafted ornaments were stolen from Kline’s tree previously, although she doesn’t know who took those. See photos of the BLM flag draped over the tree here.

People have since taken their homemade ornaments off of it because they’re worried they will get stolen or damaged. The ornaments were carefully selected to represent who Kline was as a person. 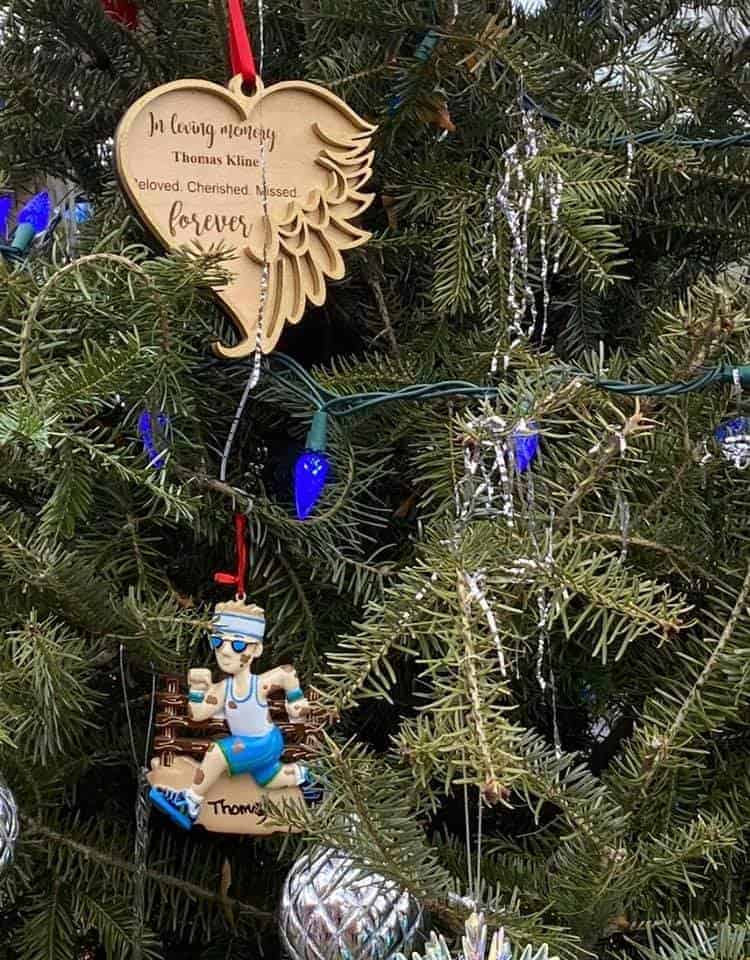 “Now it’s just ruined,” the former officer said of the tree. His tree, she said, was “the only dedicated tree that has blue lights in honor of being a police officer.” Now she, and others, have removed ornaments placed on the tree because they can’t trust that they won’t be taken.

Tom Kline, who was lost to suicide, was greatly respected for his outreach work with homeless people. Officers and groups who worked with him downtown put ornaments on the Christmas tree tribute for him in Cathedral Square Park. The former officer said the tree was sponsored by Downtown Milwaukee and that Kline had previously helped school children decorate trees in the park. 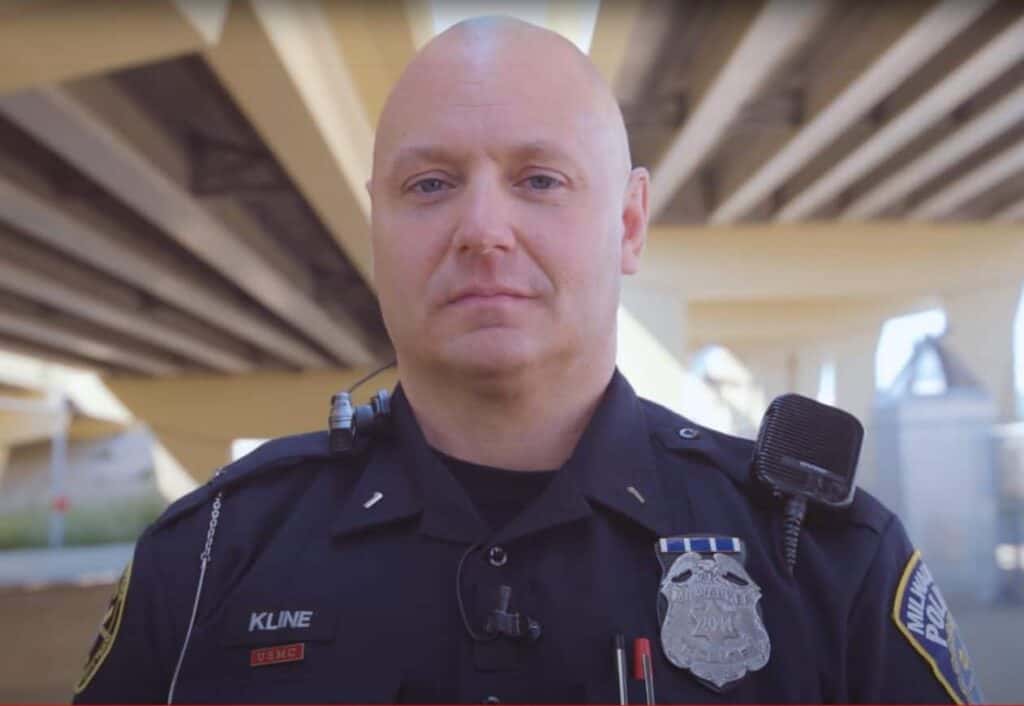 “All Tom ever wanted to do was help people,” the former officer said. “Even when they didn’t ask for it, it was things he sensed. He took care of bartenders on Water Street and community organizations; it’s all he ever did was serve his community and make it a better place for everybody involved. And he was a fair officer. It was just about helping people. That is what Tom embodied.”

According to the former officer, who didn’t want her name printed because of BLM, “They (protesters) had set up in front of Tom’s tree. I had to call friends and tell them don’t come down, it’s not safe. They were talking about their propaganda.  They had an actual propane heater in front of his (Kline’s) sign. They had two picnic tables pulled up (near) it, a grill, hotdogs.” She said protesters were also using a bullhorn in the street to repeatedly shout “f*ck the police.” She says the protesters took the flag with them after their event concluded.

Here are pictures of two trees; the first is of the Kline tree. The second is of a separate BLM tree. The former officer shared these photos with WRN to question why the protesters focused on Kline’s tree instead of their own.

What happened to the tree has enraged multiple Milwaukee police officers who have written about it on Facebook. During the BLM event, says the former officer, “People and families with kids were fleeing the park, horrified by vulgarities and obscenities.” She did say that several organizers told her they wouldn’t allow anything to happen to the tree itself. Still, the next day she went down and “cleaned everything up.”

The Milwaukee Journal Sentinel published two photos of the BLM flag draped over the tree as part of a glowing story about the BLM event. However, the newspaper never told readers that the tree was a memorial for an officer who had died. The former officer says she called an editor at the newspaper to request the photos be removed, but he refused. The caption with one of the flag photos says it was “part of the Peoples Revolution marking 200-plus days of action at Cathedral Square Park” in Milwaukee.

She added: “My contention is that it’s not a coincidence where they set up, that they took a flag and draped it on a tree that was not theirs.” She pointed out that “BLM has their own tree” in the same park and feels the group was “using his tree as part of an inflammatory statement.”

We debated whether to publish the story, worrying it might give BLM attention but were told by Milwaukee police officers that they felt it was important to do so in order to hold the group accountable for what is a despicable act. People have a right to protest, but this isn’t that; this is disrespecting a memorial to a beloved officer who lost his life, in part, because of the nastiness unfairly directed at law enforcement this year by BLM and others.

The former officer said the ornaments were carefully selected and created in the officer’s memory.

It was the stress of the past summer (a summer filled with unfair negativity that BLM and others hurled toward police) that led Kline to the breaking point, according to Fox 6, which says it received a telephone call from the officer, 47, shortly before he took his own life in a county park. The death rocked the department because Kline was a well-liked and respected officer.

“The family of Officer Kline wanted you to know his name and see his face. They hope that his death will not be in vain, and they urge others, officers or not, to seek help,” Fox6 reported.

You can watch video of Officer Kline helping homeless people on the MPD website. The video shows Kline “reaching out to help a homeless man get back on his feet.”

“The Milwaukee Police Department addresses homelessness in a variety of ways and aims to address root causes of the issue. Many homeless are affected by substance abuse issues, mental health challenges and a variety of other factors resulting in them living on the street. MPD’s aim is to aid the homeless by addressing these issues to stop the cycle and to help them seek treatment or other options for assistance,” the article says.

“Tom was the very definition of community liaison officer,” said Captain Derrick Harris to CBS58. “He had his finger on the pulse of the events that occurred in downtown Milwaukee. He was excellent in his field of work and he would put other people’s needs and challenges first.”