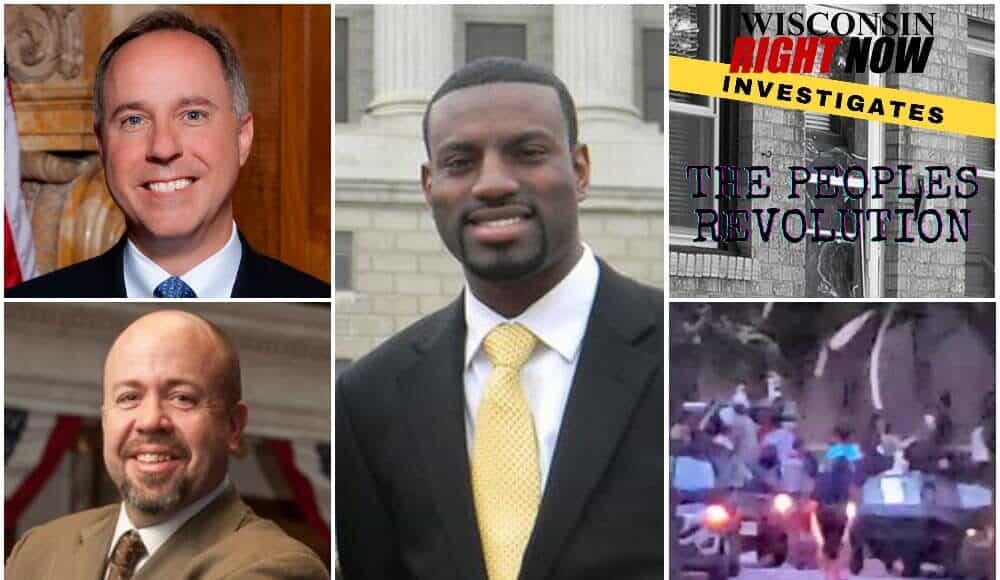 Four of a Seven Chapter Series

“I think Rep. Bowen’s actions were abhorrent, and we will be discussing options for the Assembly to address his actions,” – Assembly Speaker Robin Vos

The top two leaders in the Wisconsin State Assembly say they will discuss Wauwatosa Police Chief Barry Weber’s request that they seek discipline against state Rep. David Bowen in an upcoming caucus meeting of all Assembly Republicans.

“I think Rep. Bowen’s actions were abhorrent, and we will be discussing options for the Assembly to address his actions,” Assembly Speaker Robin Vos told Wisconsin Right Now on Jan. 23 in an exclusive interview.

In addition, state Rep. Jim Steineke, the Assembly’s Majority Leader, also promised a constituent that Assembly Republicans in that body will finally discuss Weber’s September request that the Legislature discipline – and consider expelling – Bowen (D-Milwaukee) for his alleged role relating to the vicious People’s Revolution mob attack against two police officers at their home, which left both with physical injuries.

The attack occurred in August; what’s new, though: Weber’s letter came to light, and WRN received voluminous police reports via an open records request that shed more light on Bowen’s role that day.

The police reports, for example, allege that a video shows Mensah was “being battered with Wisconsin State Representative also in close proximity.” David Bowen was the only state representative at the scene that day.

WRN also requested comment from every Assembly member regarding Weber’s request. None wrote back.

Bowen has not been arrested or charged in connection with the mob attack against then Wauwatosa Police Officer Joseph Mensah and Milwaukee Police Officer Patricia Swayka at Swayka’s home in August. Three People’s Revolution members were criminally charged, one with discharging a firearm near the officers, who were left with injuries after being beaten by multiple people. Their home was also vandalized. The People’s Revolution was furious at Mensah over his three on-duty fatal shootings. However, District Attorney John Chisholm ruled all three were legally justified acts of self defense.

Here are the new accusations against Bowen:

Bowen’s refusal to talk to police was not without consequence; police never brought to justice various people accused of physically assaulting the two officers and another eyewitness account might have helped secure prosecution.

“I didn’t get the email from the police chief, but it’s something we’ll be talking about as a caucus,” Steineke pledged to the constituent, who sent the Jan. 21 exchange to Wisconsin Right Now.

The concerned constituent sent our previous story on Weber’s letter – and the Legislature’s non-response – to Steineke. As we reported a few days ago, Weber told legislators in September that Bowen “actively participated in this incident,” labeling the legislator’s behavior “appalling” and saying it made a “mockery” of the justice system. But they didn’t even bother to write back. He requested discipline, for which there is precedent – the Legislature censured Rep. Jeff Wood in 2010 for behavior that “brought disrepute on the Wisconsin state assembly by damaging the institution’s integrity with the public.”

“Sir, I request that this matter be brought to the attention of the membership and that disciplinary action up to and including expulsion be considered,” requested the chief, who asked that the Republicans in the Legislature live up to their law-and-order rhetoric.

The caucus refers to Republicans meeting privately to discuss strategy and other issues.

“On Aug. 10, 2020, State Representative David Bowen issues a press statement on official state letterhead, regarding an incident that he was present at, on Aug. 8, 2020,” it reads.

“On that date a group of people who refer to themselves as ‘The People’s Revolution,’ including Mr. Bowen went to the residence of a Wauwatosa Police Officer, Joseph Mensah, and proceeded to verbally attack him, physically assault him, and trespass on his property. A shot was fired in Mensah’s direction into his house from a shotgun.”

The chief added, “Representative Bowen actively participated during this incident and claimed the officer’s statements were not factual. He accused not only the officer but also the Wauwatosa Police Department of issuing a false statement. He further claimed that Officer Mensah caused the entire problem. That is not true. Mr. Bowen lied in his publicly issued statement.”

Weber’s letter to Vos continues, “For almost a week following the incident, our investigators attempted to contact Mr. Bowen to give us information since he claimed to be a witness. He did not acknowledge our attempts to contact him. In fact, he had his attorney contact us and advise that he would not give a statement.”

The chief’s request came via a formal letter to Vos. The chief requested that the letter be “brought to the attention of membership.” Here it is in full:

“I find the conduct of Mr. Bowen to be appalling and disgusting. He has made a mockery of our system of law and order in Wisconsin, and has brought disgrace to the office in which he serves,” Weber wrote Vos.