An Eau Claire County judge, Sarah Harless, has ordered a 14-year-old Eau Claire teenager – Mikaila Spiess – temporarily quarantined, and the county is seeking her confinement for longer, after the girl refused to stay home from school after being labeled a “close contact” with someone who had COVID-19, court records show. The judge’s order even says “guards may be posted” at the girl’s home to make sure she doesn’t leave.

The school district obtained a “court order by the end of the day with four armed police officers ready to remove her from school,” the girl’s mother, Kita Busse, says. Now the teenager and school district are engaged in a civil court battle over the matter, she confirmed. The girl is quarantined at her home, Busse says.

Update: The girl took a COVID test, tested negative, and the case was then dismissed, her mother wrote on Facebook.

Harless was elected to the bench in 2018, defeating a Gov. Scott Walker appointee.

Busse, Mikaila Spiess’ mother, gave Wisconsin Right Now court records in the case, as well as permission to use her daughter’s name and photo. “She’s a little fighter,” Busse told WRN of Mikaila Spiess. “The hero we’ve all been waiting for is a little 5 foot 2 blonde child with the spirit of a warrior.”

“I came to school to learn, but they isolated me and said, ‘I can do this all day,'” Mikaila Spiess, who goes by the name “Pixie,” told Wisconsin Right Now. Mikaila said she responded, “So can I,” and that the school removed all students from her classroom. Mikaila’s mother told WRN, “She tried to go for a bike ride, and I had to stop her.” She said the county hasn’t posted guards at their home yet, despite the judge’s order.

Court records show that the judge, having reviewed the petition of the Eau Claire City-County Health Officer, ordered Mikaila Spiess temporarily confined “for the purposes of quarantine” pending a hearing held within 72 hours, excluding weekends and legal holidays. The Eau Claire County Sheriff’s Department or City of Eau Claire Police Department were authorized to detain and transport Mikaila Spiess to her home in Eau Claire if necessary. 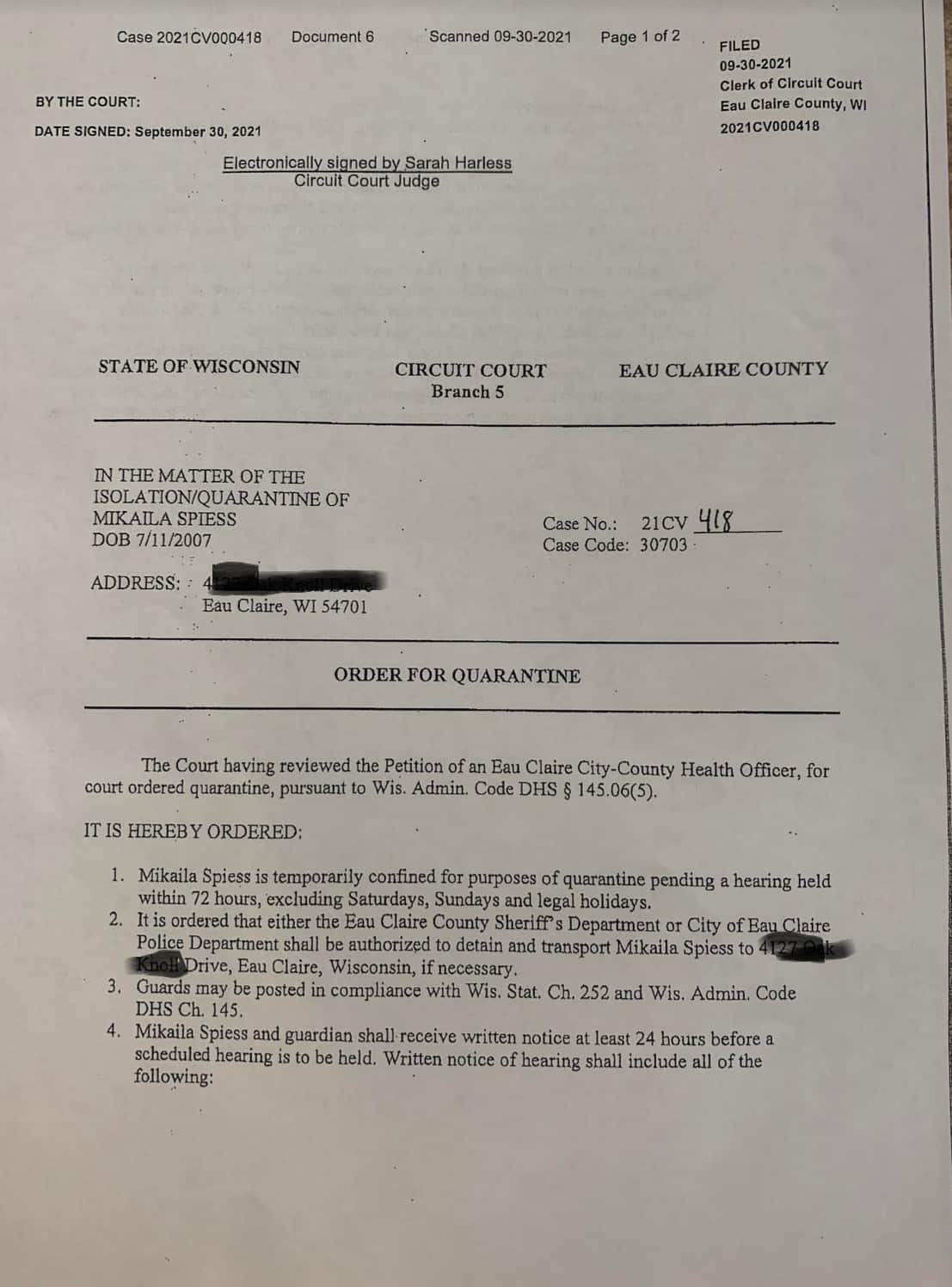 “Guards may be posted” in compliance with Wisconsin state statutes and Wisconsin administrative code, the order says.

Additional court documents provide written notice of a hearing “in the matter of the isolation/quarantine of Mikaila Spiess.” Notification was given by Elizabeth Giese, health officer for Eau Claire City-County. The hearing will be conducted by Zoom on Oct. 4, 2021.

However, Busse says if her daughter tests negative for COVID before that hearing, it won’t happen, and she will be able to return to school. 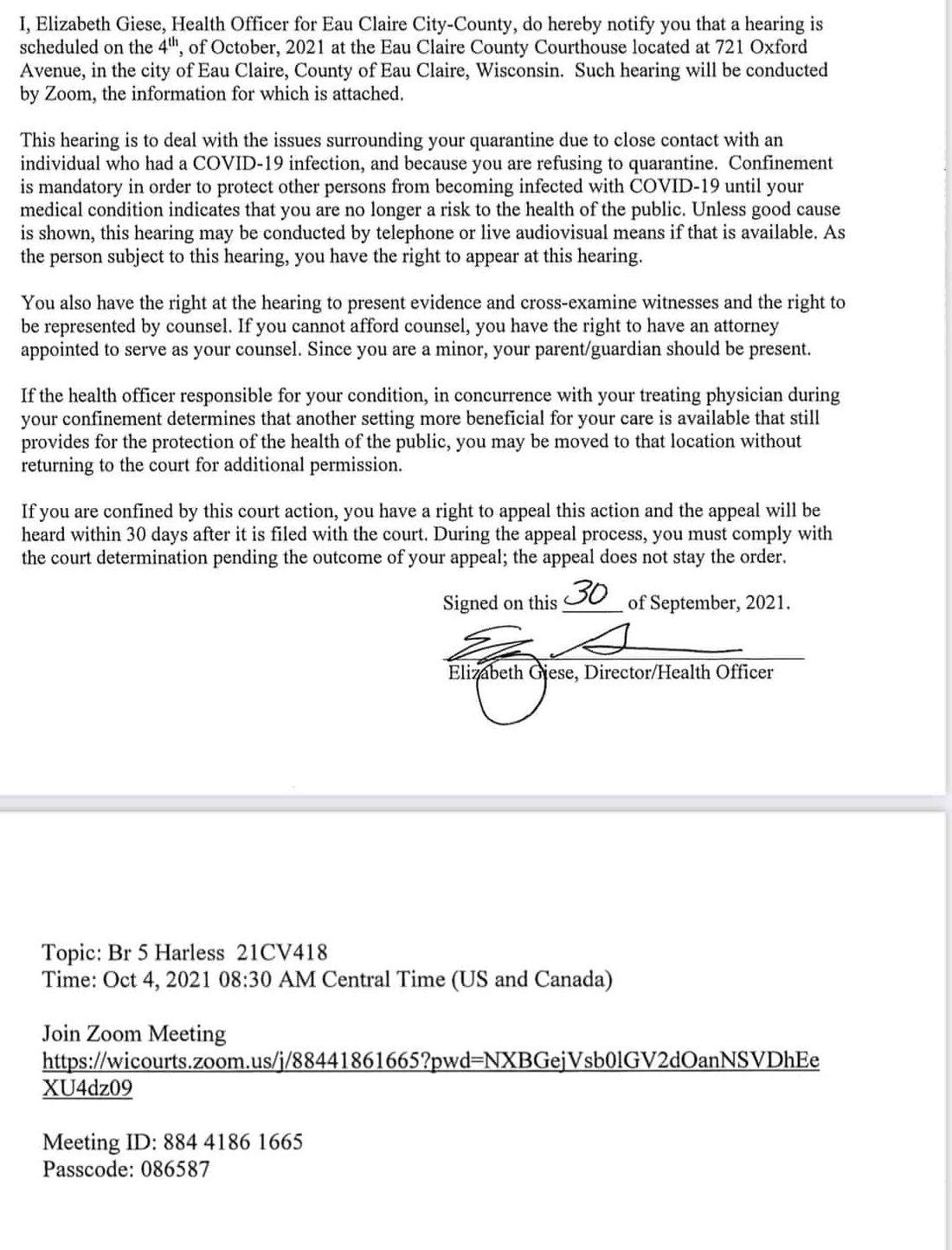 “This hearing is to deal with the issues surrounding your quarantine due to close contact with an individual who had a COVID-19 infection, and because you are refusing to quarantine. Confinement is mandatory in order to protect other persons from becoming infected with COVID-19 until your medical condition indicates that you are no longer a risk to the health of the public,” the records say.

We reached out to Giese, who told WRN, “Quarantine is required by state law for anyone who is exposed to COVID-19 and is not fully vaccinated. The Health Department continues to support vaccination (for those eligible) as a way to prevent serious illness from COVID-19 and eliminate the need to quarantine after a vaccinated individual has been exposed. For confidentiality purposes we do not speak to any specific individual situation.”

The notice we obtained says that Spiess has the right to present evidence and cross-examine witnesses and the right to be represented by counsel. Because she is a minor, “your parent/guardian should be present,” it says.

“If the health officer responsible for your condition, in concurrence with your treating physician during your confinement determines that another setting more beneficial for your care is available that still provides for the protection of the health of the public, you may be moved to that location without returning to the court for additional permission,” said the court documents, which are signed Sept. 30, 2021.

That same day, Busse took her daughter’s cause public, writing on Facebook, “I don’t normally talk politics, and what’s happening right now is a polarizing topic. (The girl) would never put others at risk, and she has immunity to Covid, but was quarantined for a close contact at school.”

Busse said the girl “made the decision on her own to attend school anyway. Before she left, she told me, ‘I understand now how scared Rosa Parks must have been when she sat in the front of the bus’! When she arrived at her first class, they removed all of the other kids from the room to isolate her. The principal said, ‘You might as well just go home, because I can do this all day.’ She responded, ‘So can I.’ I feel absolutely nauseous that she’s going through this, but I’m proud of her for standing up for her right to an education.”

Teri Piper Thompson, Communications Manager for the Eau Claire Area School District, said in an email to Wisconsin Right Now, “Since the situation you mentioned involves quarantining and a court order, you should reach out to the Eau Claire City County Health Department or an Eau Claire County judicial spokesperson.” The court system directed us to the corporation counsel for Eau Claire county, who said he can’t comment on any cases involving a juvenile.

We received a tip from a concerned parent in Eau Claire and decided to look into the situation. The mother also revealed on Facebook that there is a court case into the situation in front of Eau Claire County Circuit Judge Sarah Harless. Busse works as a Movement Coach at 180 Firearms Training.

We ran the teen’s name in court records and discovered that there, is, in fact a case in front of Harless. It’s sealed by the judge, however. The mother said on Facebook that the case is a civil case.

The girl “received a court order by the end of the day with four armed police officers ready to remove her from school,” Busse wrote of her daughter. “I met with them, and upon receiving the order, took (the girl) home myself to prevent trauma, but it was already the end of the school day. She was very respectful, but stood her ground for an entire day of manipulation. We will be appearing in court as a result of her decision to go to school as a healthy individual.”

The Eau Claire School district treats vaccinated and non-vaccinated students differently when it comes to quarantining over a close contact, according to its policy.

No quarantine is required for grades 6-12 if the student is vaccinated and has no symptoms. Close contact is defined as a student having been within six feet of a COVID positive person for cumulative 15 minutes. The district requires masks for high school students. The week of Sept. 19-25, 946 students were quarantined.

Busse, who gave her daughter’s full name on Facebook, added, “Update: we go to court Monday at 0830. I’ve put in calls to several lawyers trying to secure someone on such short notice (I received the court date and time at 7pm tonight). (The teen) will still be quarantined by court order at that time, so court will be held on Zoom (where she can be muted). The director of the health department in Eau Claire, Wisconsin, Lieske Giese, stated to me via phone call yesterday that (the girl) would need to appear before judge Harless ‘to receive her punishment.’ The public health department and this judge are trying to make an example of (the girl). She did not commit any crime, and quarantined immediately upon receiving the order. I hope that her strength shines through, so that this little girl cannot be used as a tool of public manipulation.”

In her most recent post on Oct. 1, Busse wrote, “Update: I’m am getting the court date moved, but they will only go as far as Tuesday morning. I have not yet gotten any return calls from lawyers. In speaking with the opposition’s lawyer, he stated there are no charges and agreed that if she has a negative test by then, what are we even talking about?”

Jessica McBridehttps://www.wisconsinrightnow.com
Jessica McBride, a Wisconsin Right Now contributor, is a national award-winning journalist and journalism educator with more than 25 years in journalism. Jessica McBride’s journalism career started at the Waukesha Freeman newspaper in 1993, covering City Hall. She was an investigative, crime, and general assignment reporter for the Milwaukee Journal Sentinel for a decade. Since 2004, she has taught journalism at the University of Wisconsin-Milwaukee. Her work has appeared in many news outlets, including Heavy.com (where she is a contributor reaching millions of readers per month), Patch.com, WTMJ, WISN, WUWM, Wispolitics.com, OnMilwaukee.com, Milwaukee Magazine, Nightline, El Conquistador Latino Newspaper, Japanese and German television, Channel 58, Reader’s Digest, Twist (magazine), Wisconsin Public Radio, BBC, Wisconsin Policy Research Institute, and others.

Alfonso Morales, Milwaukee’s Former Police Chief, Gets His Job Back