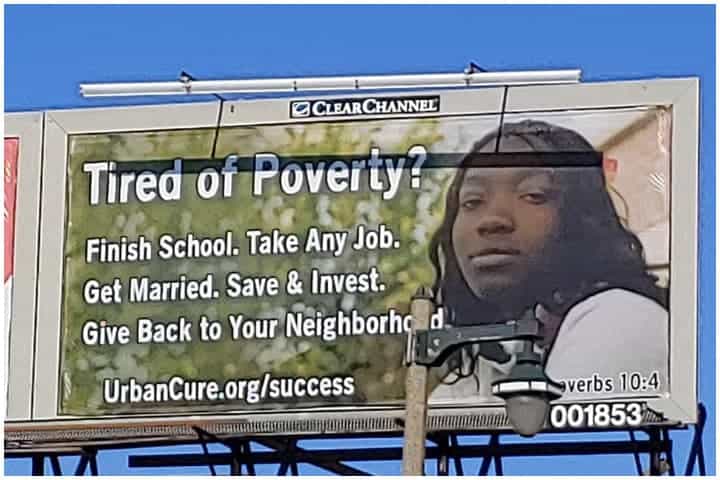 A billboard that urges people to finish school, get a job and give back to the neighborhood, has enraged a Milwaukee Black Lives Matter leader and others, who successfully demanded its removal. After outrage erupted, with people calling the billboard “infuriating” and “insulting,” the billboard was removed.

The supposedly offending billboard read, “Tired of Poverty? Finish School. Take Any Job. Get Married. Save & Invest. Give Back to Your Neighborhood.”

That upset BLM leader Vaun Mayes. It also prompted response Orlando Owens, who is running for state Representative. He wrote on Facebook, “I don’t support this Billboard and this is in the District I am running for. I am making calls now.”

Owens, who said he is “running as a Black Republican,” is a minister who said he believes “in traditional marriage. I support family.” He works with The Joseph Project, helping people find jobs. “I believe in gainful employment, not just any job,” he said. “I believe we should find work. To be clear, the sentiment and notion were good.”

He felt the billboard “missed the mark of trying to inspire people for more. The message wasn’t inspiring, but it was a true message. We should strive for these better things. It’s a tough subject matter you can’t really put on a billboard. It’s going to take a long, committed effort to change some things.” He added that “we won’t really see this mayor” helping people get good paying jobs.

Mayes was a lot harsher in his views on the billboard.

“The self hate is at an all time high. I’m definitely on one. These have to come TF down. We not doing this here. The Aw Hell Naw bat signal is in full effect! Ban this bs and give her her money back EXPEDITIOUSLY! This sh*t won’t be sliding on MY damn watch!” Mayes wrote on his Facebook page.

He tagged the Community Task Force MKE and Clear Channel Outdoor in the post and insisted, “Ima need y’all to have better judgement (sic) on the sh*t y’all let go up and not be so damn thirsty for a couple coins. Yo ass will be in poverty taking any job if this bs don’t come down 🤷🏼‍♂️”

Mayes continued, “Per Shavonda Sisson. The VP of Sales is Eric Hamme he can be reached at 262-506-9011 the billboard number is 001853 but according to the person I just spoke to they have this same one copied on several billboards around the city.”

Mayes isn’t the only person upset by the billboard. (He is one of the most prominent faces of BLM Milwaukee. He’s also on pre-trial release in a federal case accusing him of conspiracy to commit arson and intimidating witnesses in relation to 2016 Sherman Park unrest.)

Mayes later declared success that the billboard came down, writing, “That is all ✊🏼 Thank you all for your participation in all calls, emails, and posts made. Special thanks to Shavonda Sisson, Ald. Ashanti Hamilton, and Angelique Sharpe. Community Task Force MKE. At the end of the day, messaging and narrative control is priceless. We are dealing with enough to have to ADDITIONALLY deal with folks and their condescending images telling black people it’s our fault we ain’t sh*t and giving us the pull yourself up by your bootstraps speech. No TF you will NOT. ✌🏼”

Mayes shared a message from Clear Channel Outdoor that read, “Hi Vaun, We wanted you to know we were aware of your concerns. We strive to respect a wide variety of viewpoints on diversity and racial sensitivity in our local communities and work to honor those sentiments in our advertising approval practices. This ad did not receive proper approvals, lacked appropriate attribution and was properly removed. We appreciate you bringing this to our attention… all were removed today.” Mayes wrote that he wanted to “reiterate all of those billboards with that messaging need to come down.”

According to WISN-TV, the billboard was erected by the Center For Urban Renewal and Education of Washington D.C. Star Parker, a Black conservative, leads that group. She told WISN that her free speech was being harmed and said, “I lived criminal activity, drug activity, sexual activity. I barely graduated high school literate. I was in and out of the abortion clinic, after clinic. I lived on welfare.” She believes the suggestions outlined in the billboard are the way to empowerment.

Other People Were Also Furious About the Milwaukee Billboard

QueenKesha Hollins, a local model with a Black Lives Matter profile picture frame, went off on the billboard. “What is the entire brainwashed f*ck is this bullsh*t? This is on 38th and Villard!” she wrote on Facebook. “Edit: The Billboard has been taken down. Thanks, Tony Atkins TMJ4 News for helping to bring light to this incredibly important subject.”

She tried to explain her position more in the comment thread, writing, “working hard gets you nowhere” and “What they are preaching isn’t the cure to poverty.”

Atkins, a WTMJ-TV reporter, wrote on his Facebook page, “This was the messaging atop a now-removed billboard near 38th and Villard in Milwaukee. Many people were upset about its message.”

Some of the responses against the billboard on Facebook:

“That’s a terrible message! That’s not how any of it work.”

“Complete and total lack of understanding. Can’t pull up bootstraps without boots.”

“This is wrong on so many levels. SMH.”

“None of these are a cure to poverty. If it was there wouldn’t be poverty. This is a very judgmental and stereotypical statement and who ever wrote it should be blasted as a Bigot Racist or Uncle Tom.”

Not everyone agreed. A woman wrote on Mayes’ thread, “Reads like sound advice to me. I’ve seen half my family move out of poverty by heeding these steps, myself included. Even doing a combination of these things can increase one’s chances of moving out of the lower economic ranks of society. I understand that poverty is a multi-faceted topic, but we can’t shy away from the fact that every person born into poverty has power to make their own choices.”

A man wrote, “Serious question, why is this message horrible? Marriage and a steady job are negative? Someone elaborate. I live RIGHT in this area and the people around here could use some guidance. Wouldn’t you agree?”