There’s a lot to choose from, but the comments from three area elected officials about the Wauwatosa riot win the prize for the three craziest responses.

None of these officials – the Glendale mayor, a state representative, and a county supervisor – seems to acknowledge the fact that, according to a DA from their own Democratic Party, the demonstrators are protesting a 17 year old who brought a stolen gun to a mall, ran from police, discharged it, and then pointed it at the officer who shot him in legally justified self defense.

They also don’t  acknowledge that demonstrators in the past few days have looted businesses, smashed windows, confronted residents, destroyed yards, driven recklessly, thrown rocks at cops, confronted an undercover police vehicle while armed, targeted motorists who aren’t in their group, and more. They don’t seem to care that a Fox6 reporter was left bloodied after a physical attack at a Wauwatosa protest.

They advocate systemic long-term change, but never say what police are supposed to do to protect the community when disorder imminently endangers public safety. We suggest they do a ride-along. These Kumbaya singing officials make it sound like they want authorities to cede Wauwatosa to lawbreakers and just let them do whatever they want. Of course, we doubt they’d want that to occur in their own neighborhoods.

Here are the craziest comments in no particular order:

Having been to a number of protests, the protesters are peaceful. You imply that protesters intend to cause violence. What I have seen is the violence follows excessive force from the police, not the other way around. https://t.co/2oGM2d1uU7

Bryan Kennedy is the current mayor of Glendale. He describes himself on Twitter as “Former State Fed Pres of AFT. Progressive activist. Engaged citizen. #BlueWave2018 #WIPolitics.”

Here’s what he had to say about the Tosa riot:

“Having been to a number of protests, the protesters are peaceful. You imply that protesters intend to cause violence. What I have seen is the violence follows excessive force from the police, not the other way around.”

Wisconsin Right Now would like to know what “excessive force” from police has the mayor witnessed that led to the violence? Were you actually present? Or did you come to your conclusion based on what the media told you? Maybe you “witnessed” the same thing that Rep. Bowen saw during the riot of Mensah’s girlfriend’s home?

We were there at the Wauwatosa riots the last two nights. We saw VERY restrained police officers only responding after violent or reckless behavior occurred.

Radio host Stephen Scaffidi retorted on Twitter, “The alternative is to see it burn. I’m guessing most residents would prefer that not happen.” Kennedy’s response? “Have you been there and seen with your own eyes? I have.”

Listen to Fox6’s Amy Dupont’s experience with the “peaceful protesters” (starts at 15:45):

Glendale residents, be forewarned. Glendale is one incident away from becoming the next Wauwatosa or Kenosha. If left at the helm, spineless, pandering leaders like Kennedy will only result in mass chaos in your great city. 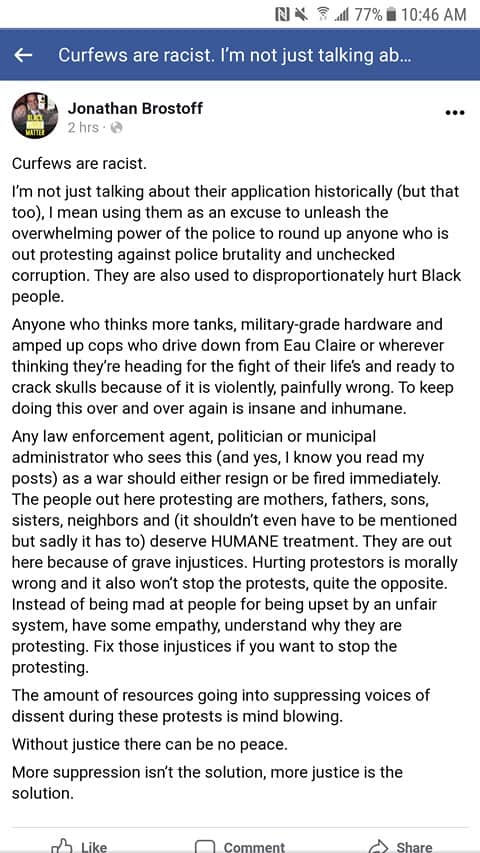 Then there was this gem from state Rep. Jonathan Brostoff, who wrote:

Nope, no need to re-read that, that is what he actually said.

He added: “I’m not just talking about their application historically (but that too), I mean using them as an excuse to unleash the overwhelming power of the police to round up anyone who is out protesting against police brutality and unchecked corruption.”

He alleged that “amped up cops” were driving down “from Eau Claire or wherever thinking they’re heading for the fight of their life’s (sic) and ready to crack skulls… to keep doing this over and over again is insane and inhumane.”

No, Brostoff, the insane and inhumane thing is to subject us to another one of your posts. To allow rioters to rampage through people’s residential yards, loot, and damage their businesses, and drive recklessly, endangering safety is insane.

Brostoff seems obsessed with protests. Check out his district boundaries, though. Maybe he should start focusing on his own district.

His response to the disorder and criminal behavior seen in Wauwatosa?

He further wrote: “Every curfew in recent memory – Wauwatosa, Kenosha, and Milwaukee before that – has emboldened the same police violence that folks are protesting in the first place. Criminalizing the mere existence of people within your borders has no place in civil society, and curfews without explicit carve-outs for the presence of people whose presence might reduce police violence: legal observers, press and electeds, is worse still.”

Clancy is basically a ridiculous quote machine. Here’s another recent quote from him:

“Don’t start shit, won’t get shit. Overreacting Tosa police and National Guard chasing protestors through streets almost daring them to get aggressive and subjecting more areas of the city to be targeted (primarily to protect Mayfair Mall). Yes, some windows got broken. People are mad that three lives have been taken by one officer. Incidentally, Jannene also reported (via Twitter) that at least one of the kids looked shocked he actually managed to break a window and ran away in surprise and fear.”

No Clancy, the overwhelming majority of people are mad that an officer was placed in a situation in which he was forced to use deadly force three times.

Wauwatosa Police and other law enforcement authorities arrested 24 people “during unlawful demonstrations” on Oct. 8, they revealed in a news release on Oct. 9. Before the arrests started, police say the marchers blocked an undercover police vehicle, trying to gain entry to it, throwing rocks at it, and pointing a gun at the occupants.

Is that peaceful? No.

They say members of the group then “began going car to car, demanding identification from occupants.” (This was similar to behavior we witnessed when the group showed up at the West Allis Police Department later that night to check on arrested protesters whom they believed were moved there; they aggressively shined strobe lights into the windshields of passing motorists, screaming expletives at people they identified as being out group.)

A smaller group then tried to force entry at 7:48 p.m. to the Cigarette Depot at N. 76th Street and West Center Street, say police. That resulted in three arrests turned over to Milwaukee Police Department. Marchers then went through a residential neighborhood, violating curfew and “disturbing the peace,” police wrote.

Police added: “These individuals made the choice to engage in public demonstration during an emergency declaration, which had been ordered with the purpose of protecting life and property during this tumultuous time in our community. The arrests were made without regard for who these persons were; rather, they were made based on those individuals’ own decision to willfully violate the emergency order. We can appreciate the anger and frustration that exists among those closely affected by recent events. Moving forward, we ask that all citizens comply with the emergency order in place by remaining away from City of Wauwatosa public spaces.”

At 7:48 p.m., a group of protesters broke away from the main group and attempted to force entry to the Cigarette Depot on the northwest corner of N. 76 St. / W. Center St. Three people were arrested and turned over to the Milwaukee Police Department. The demonstrators continued through a residential area, disturbing the peace all the while violating the emergency curfew order.

“Citations for violating an emergency order were issued to 19 people. Additional charges may be issued after a comprehensive review of videos, reports, and other evidence,” they wrote.

Police did not release the names of those arrested, but video and widespread social media reports indicated that they included Tracy Cole, the mother of Alvin Cole, the armed teen shot by a police officer after the teen pointed the gun at him in a case ruled lawful self defense by the DA. Cole’s two sisters and the father of Jacob Blame were among those arrested, according to social media accounts. We asked police whether they could confirm that, but haven’t gotten a response yet on the names. Read the story on the mother’s arrest here.

Protesters chased one of the mainstream news outlets off the scene. They rode their Yukon up on people’s’ lawns and the sidewalks as they darted away #Milwaukee #Wauwatosa #MilwaukeeProtests #AlvinCole #JosephMensah pic.twitter.com/hHbNDmYzqH

In details that match that incident, police say that they encountered vehicles driving “across all lanes of traffic” and deployed tire deflation devices to protect the public. Some people refused to exit their cars when told they were under arrest.

Wauwatosa was operating under a curfew running from 7 p.m. to 7 a.m. The night before police made a single arrest. Sporadic looting broke out, businesses were vandalized, rocks were thrown at police officers, residential neighborhoods faced problems, and there was widespread defiance of curfew.