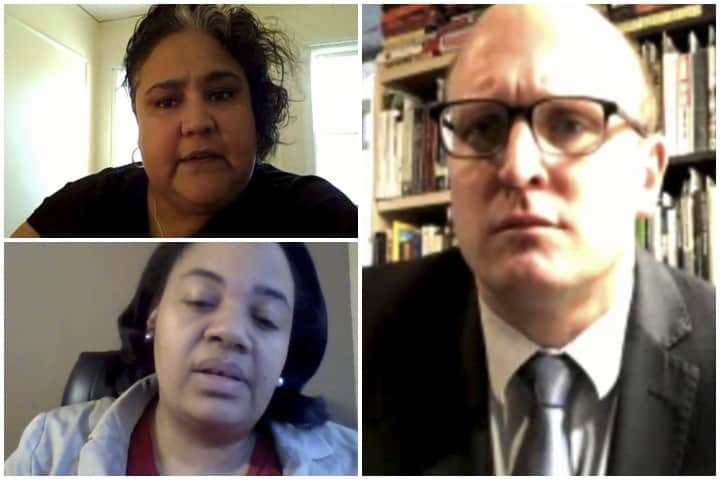 The City of Milwaukee Finance & Personnel committee has rejected $9.7 million in a federal COPS grant that would provide 30 new police officers to help deal with spiking violent crime and homicide rates.

The officers would have enabled MPD’s participation in a federal program called Operation Legend that, according to a letter from the U.S. Attorney, is designed to “address firearms offenses, violent individuals, and violent drug trafficking organizations.”

“These resources will help address a spike in violent crime,” he added. “In December 2019, the Attorney General identified Milwaukee and six other cities as having violent crime rates that were significantly higher than the national average.”

No thanks, aldermen said. Not needed. That’s even though the police department’s chief of staff said it was unclear whether MPD could continue with Operation Legend without the grant.

The Milwaukee Police Association is blasting the decision. 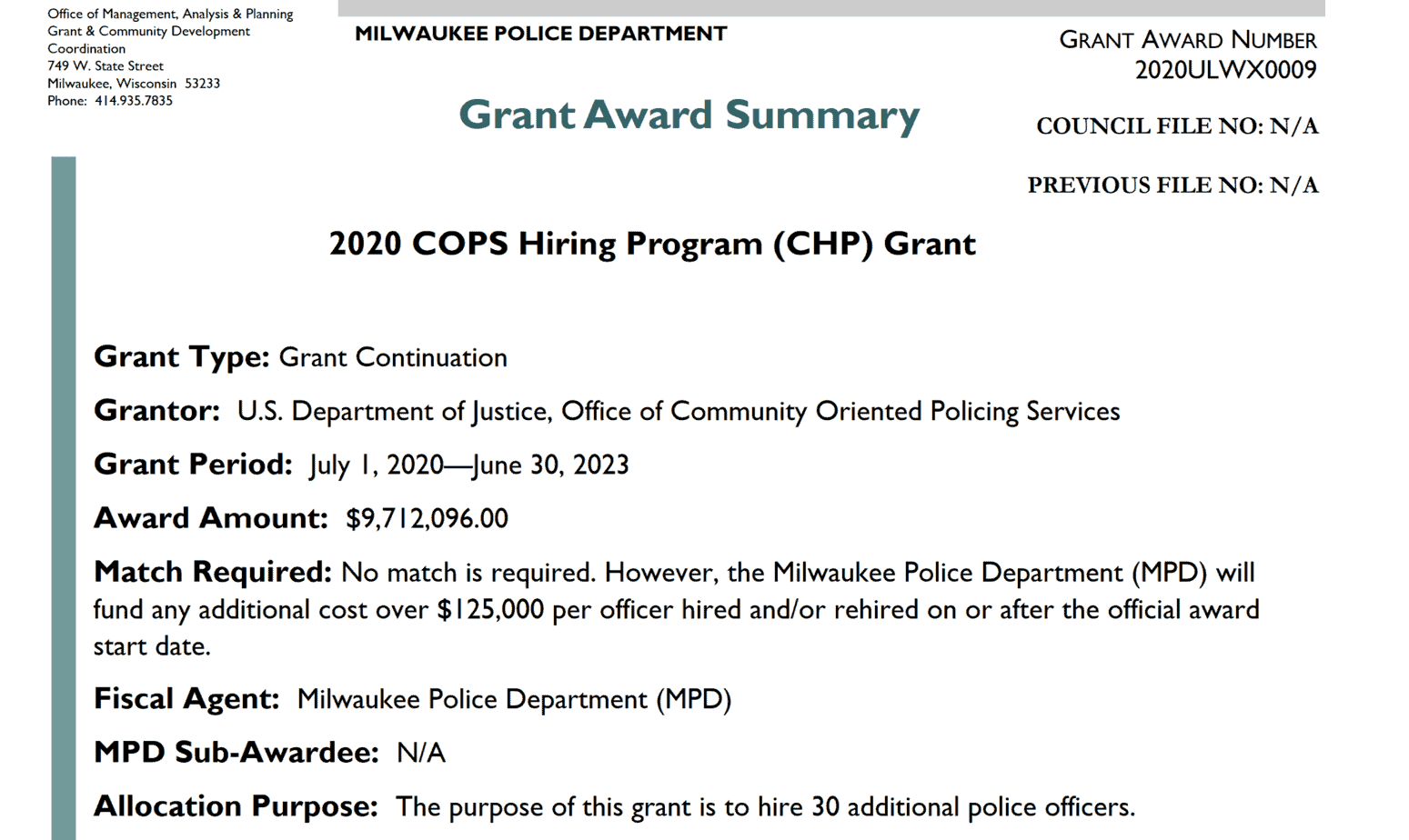 According to city minutes, the motion failed 3-2 on Oct. 28. Aldermen Michael Murphy and Scott Spiker voted for the grant; Nik Kovac, JoCasta Zamarripa, and Milele Coggs voted no. The resolution was then placed “on file.” It was brought up at the Nov. 4 Common Council meeting and referred back to the Finance committee.

Murphy, who supported the grant, ticked off issues of concern: Response times, clearance rates dropping, homicides and shootings rising. He pointed out that, by the time the grant expires in three years, the force will be reduced in strength through attrition anyway. He said the “vast majority of citizens” want police to be visible in their community. He didn’t think it made sense to “give away or give back nearly $10 million that is not in the tax levy that would hire officers to patrol our streets…I’m happy to take the federal money.”

Coggs, one of the majority of three city officials turning down the grant, raised concern that, if the officers remained on the force after the grant expired, they would be subject to pay increases. Kovac raised concern about whether the city could still layoff police officers if it accepted the money and criticized Gov. Scott Walker and Act 10.  He said he has “philosophical” and “financial” concerns about the police budget and doesn’t feel comfortable working “with this federal government,” accusing it of crimes “against humanity.” Discussion also centered around whether accepting the grant would make it tougher to reduce the Police Department’s budget. Kovac said he wants a long-term reduction in the percentage of the budget given to police.

Coggs said she seconded everything Kovac said and stressed looming “pension contributions.” She said people have a desire to “reimagine” or even “dismantle” policing. She said the “least of what I hear is about gaining additional officers” when she talks to constituents.

Milwaukee just recorded its 166th homicide of the year, breaking a 1991 record.

Yet the city’s police force is shrinking – fast.

The city’s budget director told the aldermen that the city’s force is projected to decline over the next three years already. “If the award is not accepted, the budgeted sworn strength will fall by 30 officers to 1,652, ” he said in a memo. A chart he gave aldermen shows the force strength could drop to 1,432 by 2023. However, a majority of aldermen still said no, even though the grant did not require the city to retain the officers beyond three years or provide matching funds. 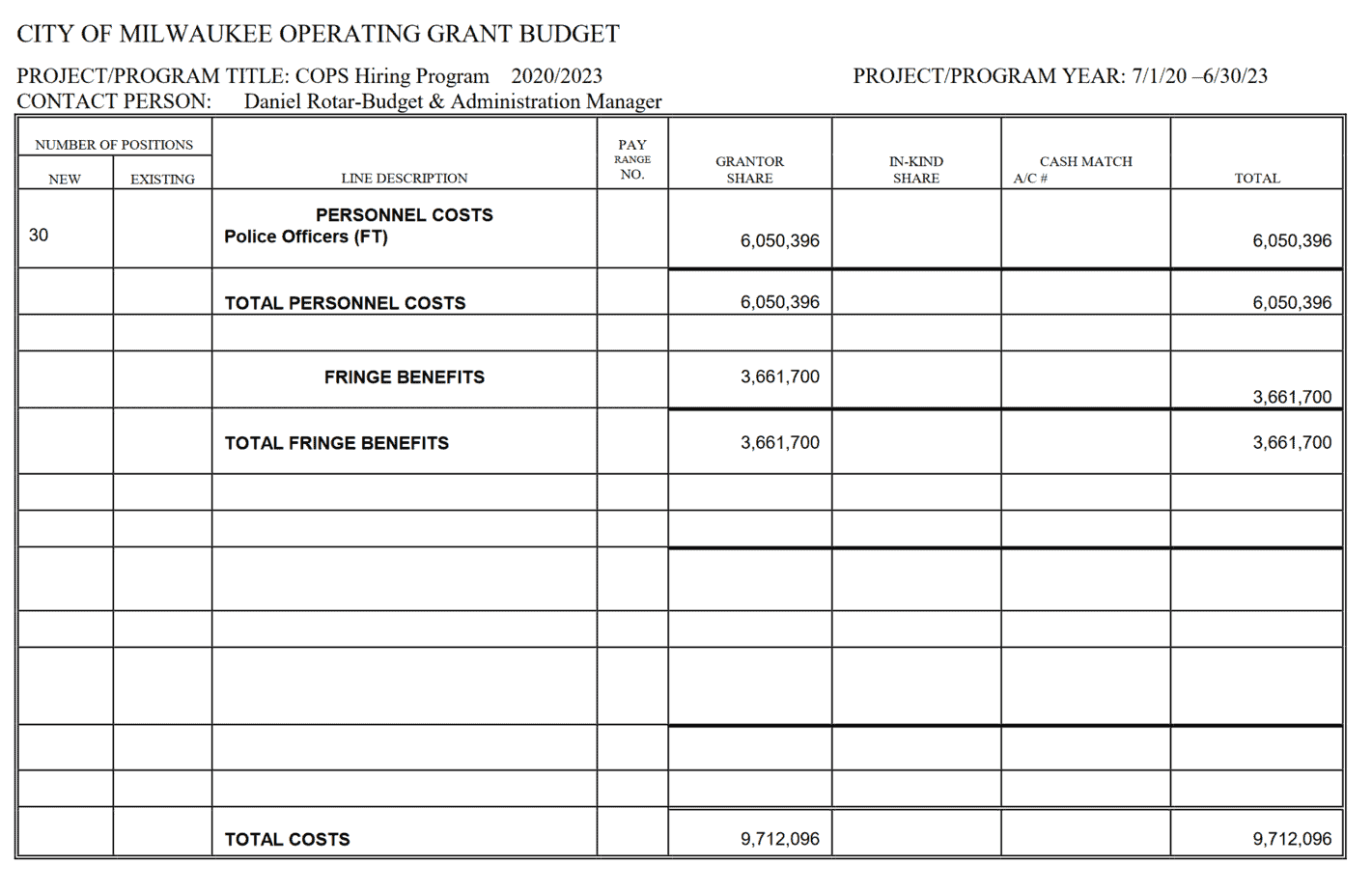 According to a letter to the community from MPA’s president Dale Bormann Jr., the union that represents rank-and file Milwaukee police officers, the move comes as the city expects to lose 450-600 officers through attrition over the next four years. It also comes as other officer positions aren’t being filled.

“This grant would provide money to replace some of those officers free of charge to city taxpayers, for the first three years. Is it the intention of the common council not to replace any of the up to 600 police officer positions?” asked the union, adding, “These 30 officers would provide valuable resources for the community.”

What the Aldermen Turned Down

We’ve obtained the grant documents. They confirm the city would have received more than $9 million to fund 30 police officer positions. “This grant will help fund to (1) hire new officers, (2) rehire officers who have been laid off, or (3) are scheduled to be laid off on a specific future date, as a result of local budget reductions, on or after the official award start date,” according to the 2020 COPS Hiring Program (CHP) Grant Analysis document.

In addition, even before the committee’s action, the MPD’s acting police chief wrote a letter to the U.S. Department of Justice imperiling the grant because MPD is refusing to comply with a section in the application on illegal immigration that would give federal authorities access to those under detention. However, despite losing bonus points for refusing to agree to the illegal immigration section, MPD still qualified for the grant, the DOJ responded on Oct. 16.

The letter from Acting Police Chief Michael Brunson to the US Department of Justice explained that the police application for the COPS grant was dated March 10, 2020. Then Chief Alfonso Morales and Mayor Tom Barrett were notified that they had received the $9.7 million for 30 officers over a three-year funding period.

Brunson pointed out that the only correctional or detention facilities are temporary municipal lockup facilities. He said that the immigration procedures for MPD prohibit the actions required by the certification. He said that the MPD hoped it could still qualify.

The union singled out comments from Alderman Nik Kovac, who stated aldermen turned down the grant “based on fiscal realities and mainly for philosophical reasons.”

According to the union: “The city just surveyed the citizens of Milwaukee and they are satisfied with the police service they are receiving at current staffing levels. By turning down this grant, the city will put future funding grants from the federal government in jeopardy.”

The union pointed out that the 30 officers would likely have been 80% minorities. “The council speaks about a more diverse force all the time, this grant would help to provide that. It is unfathomable to think why the city would turn down almost 10 million dollars in free federal funding unless there is a separate agenda,” said the union.

According to the union, the elimination of 600 officers equates “to almost half of our current staffing for Police Officers. The Milwaukee community has stated that they want more police officers. They want these officers to patrol their streets. They want officers to respond to assignments. They have voiced this to the alderpersons. But the alderpersons appear to be ignoring this fact. It is certain that activists have voiced their displeasure with the police department, but most of you have spoken in favor of police.”

If the intention of this common council is to reduce 450 police officers from the city, the professional police officers that we represent will continue to try and do everything we can to combat disorder and crime, but with up to 600 less of us, it is likely that the response times to your calls may double. You may not get an officer for everything that you call for. Crime rates will continue to increase, and many more lives will likely be lost to homicide and reckless driving. You and your family will run the risk of being one of these victims. Ladies and Gentlemen of Milwaukee, we care deeply about the Milwaukee Community and want everyone to be able to feel safe in their community. We urge you to call your alderman and voice your concerns.

City of Milwaukee
Keep Up With Breaking Conservative News! by jim790 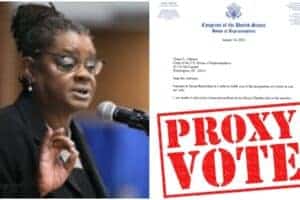