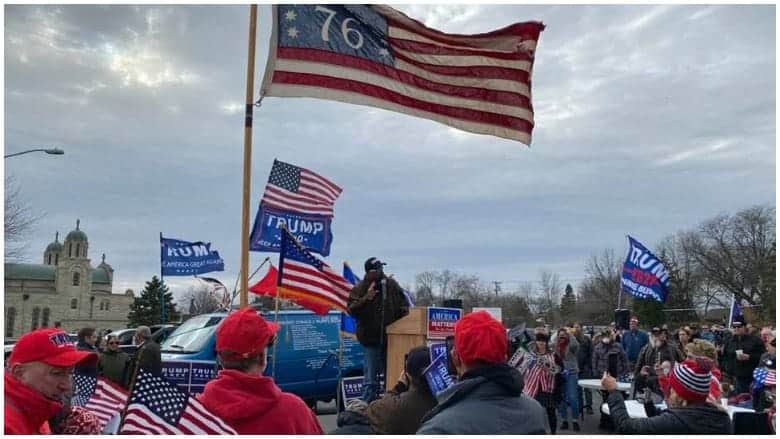 A pro-Trump rally at American Serb Hall ended in chaos after the City of Milwaukee Health Department decided to cite the venue $2,000 for COVID-19 restriction violations (one violation was because rallygoers didn’t remain seated), witnesses said a BLM supporter shoved a woman, a city health inspector was shoved by a person who called him a “commie,” and a representative of Serb Hall ended up on the ground after telling rallygoers that he didn’t want to lose the facility’s license.

Here’s the moment the representative for Serb Hall, Nick Alioto, ended up on the ground. “City of Milwaukee is here. I’m not going to lose our license. I will stop the rally if you don’t sit down. Sit down,” he said to the crowd. A Trump supporter is then seen holding him from behind right before he tumbles to the ground.

WATCH: The moment a #defendyourvote rally in Milwaukee abruptly ends after a representative for the venue ends up on the ground: @fox6now pic.twitter.com/KRHE2OBFvk

We called the manager of Serb Hall, but he didn’t get back to us. “One gentlemen rushed me and pushed me and twisted the microphone out of my hand and as he was moving away, pushed me again, and so I attempted to get the microphone back and grabbed, him and at that point, a number of people in the crowd pushed me to the ground and started kicking me,” Alioto said to WISN-TV of the Trump supporters. He told the Journal Sentinel “several people kicked him in the ribs and chest,” which the newspaper noted you can’t see in the video.

A Black Lives Matter supporter who is affiliated with the People’s Revolution was also captured on video appearing to strike a Trump supporter. The Milwaukee Journal Sentinel described that scene by writing that, “Social media captured at least one physical altercation between attendees.” (The newspaper also labeled all Trump supporters’ claims of voter fraud as a “fictional line.”) Wisconsin Right Now has obtained video showing the BLM supporter threatening repeatedly to knock Trump supporters out at the rally. You can watch it later in this story. Here’s video showing the physical contact:

Some news sites didn’t mention the BLM violence, focusing only on what happened to Alioto, who also criticized the Health Department. We contacted the City Health Department, and their spokesman said they didn’t shut down the event and weren’t planning to do so but did hit the venue with violations.

“Serb Hall will be receiving multiple violations,” confirmed Jeff Fleming, spokesman for the Milwaukee Health Department, in an interview with Wisconsin Right Now. He said four violations would be issued at $500 each. At 12:30 p.m. on Nov. 14, health inspectors stopped by the event. “Four major provisions were in violation,” Fleming said, listing them as social distancing, no masks, capacity, and “people were not seated.”

Fleming said that people were “required to be seated” and that “everyone has to be wearing a mask unless they’re eating or drinking.” He said he didn’t believe there was a medical exemption. He told the Journal Sentinel that “The Health Department has changed its policy. There are no longer warnings given.” He didn’t explain when the policy was changed and why.

Things became even more chaotic when the contingent of Black Lives Matter protesters showed up and squared off with Trump supporters, some of whom were carrying Trump flags. Witnesses at the scene also said they saw a Black Lives Matter protester shove a woman at one point; the Health Department’s spokesperson says a person also shoved a city health inspector. Fleming said he didn’t know which side that person was on but they shouted that the health inspector was a “commie.” Fox6 captured video of Trump supporters as they paraded into the street.

“Opposing sides combated each other,” said Joshua Kuehn, who was at the Trump rally. “People came out and yelled really, really nasty things at Trump supporters…I had people calling names and calling me a racist. I’m not a racist. I don’t agree with that.”

He added, “I did see two gentlemen…push a woman.” He said they were associated with Black Lives Matter, and the woman “was on the Trump side. MPD was really not in the mix. They were standing in the median.”

Photos and witnesses showed the rally was outside. “It was calm and peaceful. A lot of us had masks on. I had my mask on. There was no reason for them to come and shut everyone down,” said Hilario Deleon, a Trump supporter. “We do have a right to peacefully protest like the other side.” He said he believes the election was “stolen. It doesn’t add up. People are upset, and they have a right to be upset.” He estimated that about 75% of people at the rally were wearing masks.

Vaun Mayes, a BLM activist who is on pretrial release for federal charges relating to an alleged Molotov cocktail plot, was one of those streaming live from the scene. Earlier, Mayes wrote on Facebook, “I’m thinking maybe the health dept. would want this little party documented and inspected with all the covid floating around.”

We reached out to police to see how many people were arrested and for what but didn’t hear back, but JS reported that one citation was issued. The People’s Revolution member who goes by the name Jasj Oyw on social media wrote on Facebook that he got a ticket. “White dude said who’s your daddy nbs that shi hurt his friend 😞then it hurt me🤣 I hope his face okay🤷🏽‍♂️🤷🏽‍♂️🤷🏽‍♂️” he wrote.

Oyw also posted a video in which he repeatedly threatens to knock people out and uses the N word at the Serb Hall Trump rally.

“If you touch me I’ll beat your ass. And that goes for all you N words out here. One person touch somebody I’m knocking you the f*ck out..watch out. I don’t care if you’re a female or not. I’ll knock your ass clean the f*ck out boy,” he said at various points in the video. “I’ll knock you the F* out N word,” he said at another point referring to “dumb as* trump supporters.” You can watch his video below, but it uses disturbing language, including racial slurs.

There is also video of the arrest. We don’t condone the language used in the tag line of this YouTube video but are embedding it to show the arrest.

We also went to the scene to see what was going on and witnessed several verbal disagreements over politics between Trump supporters and BLM supporters but no violence at that point. The rally, which was sponsored by the Republican Party, featured former Milwaukee Sheriff David Clarke and was designed to support Trump’s efforts to seek recounts. At one point, pro-Trump protesters spilled into the streets.

We spoke to Lee (pictured above), who is from Butler, and who was verbally confronted by BLM. “I came out for what was supposed to be a peaceful Trump rally. It was basically shut down by the Democratic dictators of the city of Milwaukee,” he alleged. “The police come and just stand and watch…They move all the Trump supporters out and then leave these guys (BLM) standing here.” As for Trump, he said, “All I am saying is check the count. If he lost, he lost…I really didn’t want to talk to those BLM people, but they came at me like they always do.”

According to Fleming, on Nov. 13, Friday, the Milwaukee Health Department met with Serb Hall and “went over the rules.”

He said there is a special provision in the current COVID-19 order that “allows up to 100 people for events covered by First Amendment privilege, such as political rallies.”

“People were not seated, he added. At that point, he said health inspectors “reached out to the manager. They went and told him they had observed violations.” Fleming said the Health Department wasn’t planning to shut the event down. “They were going to give violations. It was the manager who was attempting to shut it down, fearing for his license,” said Fleming.

He said after the manager went to the podium to make his announcement, the health inspectors “were verbally abused and one was pushed but not injured.” They then left.