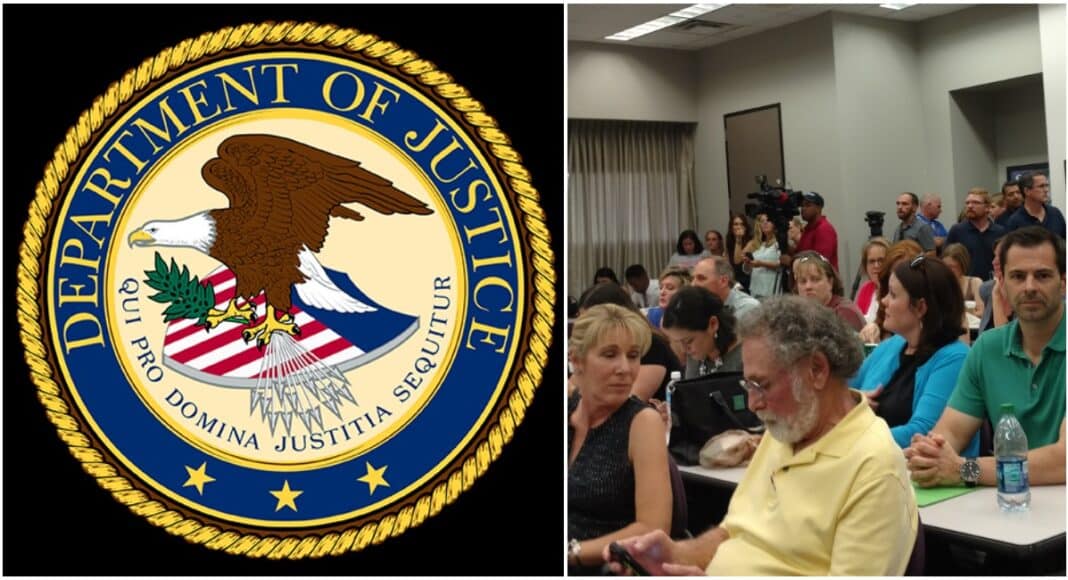 US Justice Department Weaponizes Against Parents Upset Over Masks, CRT

Last week, the National School Boards Association asked President Biden for federal assistance to investigate and stop threats and acts of violence… over policies like mask mandates and “propaganda purporting the false inclusion of critical race theory.” Now the US DOJ is seeking to weaponize the FBI against parents upset over ideological indoctrination and masks in their children’s schools.


On Oct. 4, U.S. Attorney General Merrick Garland directed federal authorities to hold strategy sessions in the next 30 days with law enforcement to address what he believes are the increasing threats against school boards and staff in the country’s public schools.

Garland said there has been “a disturbing spike in harassment, intimidation, and threats of violence against school administrators, board members, teachers, and staff who participate in the vital work of running our nation’s public schools.”

Is this a progressive pushback against a true parental awakening that is shifting power away from the left in public schools?

We don’t remember a similar focus on the harassment, intimidation, and threats against police officers, small businesses and others from groups like BLM and Antifa (if you don’t think there were any, go to Louisville or Kenosha)…and we wonder whether Garland will show similar concern about liberal threats against school boards like those received by board members in Waukesha.

Last week the National School Boards Association asked President Biden for federal assistance to investigate and stop threats and acts of violence against public schoolchildren, school board members, and other staff over policies like mask mandates and “propaganda purporting the false inclusion of critical race theory within classroom instruction.”

Citing an increase in harassment, intimidation and threats of violence against school board members, teachers and workers in our nation’s public schools, today Attorney General Merrick B. Garland directed the FBI and U.S. Attorneys’ Offices to meet in the next 30 days with federal, state, Tribal, territorial and local law enforcement leaders to discuss strategies for addressing this disturbing trend. These sessions will open dedicated lines of communication for threat reporting, assessment and response by law enforcement.

“Threats against public servants are not only illegal, they run counter to our nation’s core values,” wrote Attorney General Garland. “Those who dedicate their time and energy to ensuring that our children receive a proper education in a safe environment deserve to be able to do their work without fear for their safety.”

According to the Attorney General’s memorandum, the Justice Department will launch a series of additional efforts in the coming days designed to address the rise in criminal conduct directed toward school personnel. Those efforts are expected to include the creation of a task force, consisting of representatives from the department’s Criminal Division, National Security Division, Civil Rights Division, the Executive Office for U.S. Attorneys, the FBI, the Community Relations Service and the Office of Justice Programs, to determine how federal enforcement tools can be used to prosecute these crimes, and ways to assist state, Tribal, territorial and local law enforcement where threats of violence may not constitute federal crimes.

The Justice Department will also create specialized training and guidance for local school boards and school administrators. This training will help school board members and other potential victims understand the type of behavior that constitutes threats, how to report threatening conduct to the appropriate law enforcement agencies, and how to capture and preserve evidence of threatening conduct to aid in the investigation and prosecution of these crimes.

Threats of violence against school board members, officials, and workers in our nation’s public schools can be reported by the public to the FBI’s National Threat Operations Center (NTOC) via its national tip line (1-800-CALL-FBI) and online through the FBI website (http://fbi.gov/tips). To ensure that threats are communicated to the appropriate authorities, NTOC will direct credible threats to FBI field offices, for coordination with the U.S. Attorney’s Office and law enforcement partners as appropriate. Reporting threats of violence through NTOC will help the federal government identify increased threats in specific jurisdictions as well as coordinated widespread efforts to intimidate educators and education workers.

Last month, WRN reported how aggressive threats and bullying from a national liberal “mob” driven by politics and misleading news coverage caused the Waukesha School Board to reverse direction by rescinding its decision on free school lunches, some board members said in a heated special meeting on Aug. 30.

The 5-4 vote came after an emotional discussion in which school board members in opposition to rescinding the vote described receiving threats, with one board member saying people’s businesses were imperiled, and he was told to “put a bullet in my head.” Board members described their children’s pictures being posted online. Several board members said the board would be caving to a bullying mob if it changed its earlier decision, but that’s just what happened.

In June, the board voted unanimously to abandon a federal program that gives universal free lunches to all students regardless of income. The board switched back to a program, used before the pandemic, that gives free and reduced lunches only to children whose parents meet income guidelines.

Owens Talked About Potential ‘Coverup’ by Trump in Deleted Podcast