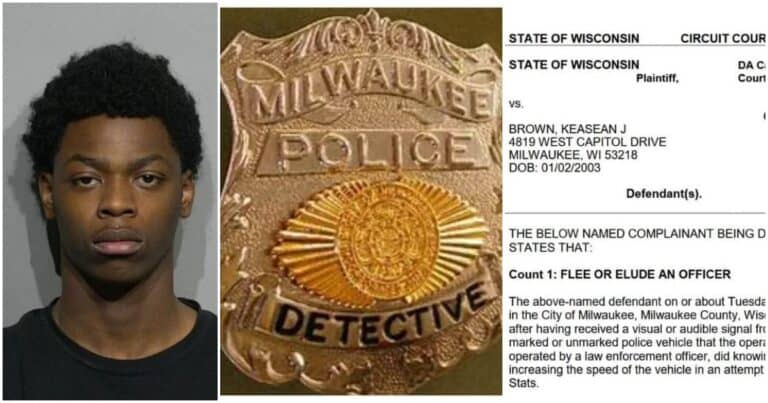 The suspected shooter is now in custody.

Keasean Ellis-Brown is the alleged shooter of a Milwaukee police detective in the Third Ward, and we’ve learned he was out on $1,000 bail for another very serious felony case in Milwaukee County. He’s currently at large.

On March 15, 2022, MPD officers “received credible information that Keasean Ellis-Brown was inside a residence on the 2900 block of N. 9th Street,” Milwaukee police said in a news release.

Ellis-Brown “was criminally charged for shooting MPD Detective Wilkiewicz on January 13, 2022, on the 200 block of E. Buffalo Street.  At approximately 11:30 a.m., officers responded to the address; however, Ellis-Brown refused to come out,” police wrote.

Wisconsin Right Now was first to break the news through multiple sources that Keasean J. Ellis-Brown, who is also known as Keasean Brown, is the suspect being sought for allegedly shooting the detective, who was in stable condition after being shot twice while disrupting a carjacking and robbery and is now on the road to recovery.

It turns out that Keasean Ellis-Brown was freed on $1,000 bail in another serious case, continuing the pattern that gained national attention when it was revealed that Darrell Brooks, the Waukesha parade massacre suspect, was also out on $1,000 and $500 bail for previous felony cases. At that time, District Attorney John Chisholm tried to paint the bail amount as an aberration, but we have written story-after-story of people out on low bail in Milwaukee County who have gone on to commit very serious crimes. Court backlogs have contributed, as well as decisions by court officials to keep some courtrooms closed.

A second suspect, Dionta’e Hayes, also has a pending felony case in Milwaukee County for which he was released in October by the same court commissioner, Grace Flynn, on a $500 signature bond. However, four sources told Wisconsin Right Now that police believe Ellis-Brown, not Hayes, is the likely shooter of the off-duty detective.

The criminal complaint in the pending case says that, on Oct. 26, 2021, two Milwaukee police officers were advised by other officers that there were subjects inside a Kia Sportage vehicle located in the Culvers parking lot at 5501 W. Fond du Lac Ave., that “were wanted in connection with a shooting incident that occurred at Culver’s a few days prior.” The officers observed the Kia traveling at a high rate of speed “erratically.”

The officer pursued the Kia, which continued traveling at a high rate of speed weaving in and out of traffic, going about 90 miles per hour. The Kia drove on a sidewalk and disregarded a traffic signal and stop sign, almost causing accidents. The pursuit continued 3.12 miles throughout Milwaukee.

The driver of the Kia fled on foot holding a pistol after the Kia crashed into a tree at 4231 W. Capitol Drive. The officer ordered the driver to stop and drop the firearm, but the driver disregarded those commands. The driver went behind a gas station and then ran through an alley and yards. The driver was apprehended and identified as Keasean Brown. The firearm was located underneath a car. A front-seat passenger was also taken into custody.

The Kia was reported stolen earlier that day.

In 2019, a judge criticized Grace Flynn for giving a man a signature bond who caused a standoff. In 2017, she received more negative media attention when it was revealed that the man accused of murdering housing inspector Greg “Ziggy” Zyszkiewicz was out on a signature bond from Flynn for a felony.

Now an officer’s life was placed in jeopardy.

A 2012 article said Grace Flynn was already earning $111,862 a year. Court commissioners fly beneath the radar because they are appointed by the chief judge, after screening by a panel of several other officials, not elected by voters. The chief judge certifies commissioners each year.

He was released on $1,000 bail by Court Commissioner Grace Flynn on October 28, 2021. Carole Manchester appeared for the State of Wisconsin, although the court records don’t say what she recommended. Manchester also appeared in court on one of Brooks’ cases.

“Court-ordered defendant TURNED OVER TO Justice Point for SUPERVISION Level 3. No driving without a valid license. No possession of dangerous weapons or firearms,” the court records say.

By Nov. 2, 2021, there was a JusticePoint violation report received by the court.

On Nov. 8, 2021, a court hearing was adjourned when Brown showed up without a lawyer, and an indigency hearing was set.

By Dec. 2, he had a lawyer, who requested a preliminary hearing.

On Jan. 5, a hearing was adjourned because a state’s witness was out ill.

We have requested that complaint from the Milwaukee County DA’s office.

His name is also given as Keasean Brown or Keasean J. Brown.

A preliminary hearing is scheduled in that case for Feb. 8, 2022.

His only other adult offense in Wisconsin is a traffic matter.

“Yesterday was a trying day for our department and Association,” said Andrew Wagner, Milwaukee police Association President in a statement. “While off duty, one of our detectives observed a citizen in distress being violently assaulted by criminals. The Detective then acted heroically on his sworn oath and tried to intervene. While attempting to handle the situation, our Detective was shot by these violent criminals with no regard for human life. We commend our detective for taking swift action, without hesitation and putting the safety of the community above his own personal safety.

All too often our officers are seeing firsthand the effects of crime on our community. Each day our officers and detectives act heroically, responding to growing calls for service and historical levels of violent crimes. They take their commitment to their community and their oath of office seriously. They respond with professionalism and a real desire to make the lives of the citizens they serve better.

The incident with our detective hits home. But our officers see this day in and day out, inside neighborhoods in this city. We know the violence plaguing our city right now has left countless victims like our detective in its wake. The violence needs to stop. We must start holding criminals accountable for their actions. We must start putting victims’ rights first. We had a formula that worked in the past to reduce crime and enhance the qualify of life for our residents. It is time we abandoned this experiment of a holistic approach to policing. We need to (RE) fund our department to staffing levels that will reduce crime. We need to have strict prosecution of crimes with cash bail. We need to open our courts and jail systems to full capacity and let us get back to the very fundamental principle of policing, putting bad people who prey on good people in jail.”

The Shooting of the MPD Detective

Milwaukee police gave this account of the detective’s shooting:

“On Thursday, January 13, 2022, at approximately 2:00 p.m., a suspect unsuccessfully attempted to steal a vehicle containing three children at the 200 block of E. Buffalo Street. The suspect left the vehicle and began to leave the scene in another vehicle. The adult female driver of the vehicle located and picked up a cell phone around her vehicle and entered a nearby business.

While inside the business, the suspect that attempted to steal the vehicle, approached the female and attempted to rob her. An off-duty Milwaukee Police Department detective intervened, announced that he was an officer and attempted to detain the suspect. A struggle ensued, at which time the suspect brandished a firearm. The suspect fired multiple rounds at the off-duty detective, striking him multiple times, and fled the scene. The detective returned gunfire. At this time, there is no indication that the officer’s gunfire struck anyone.

The suspect fled in a vehicle that was later observed by officers on the 2700 block of W. State Street. Officers attempted to stop the vehicle; however, the driver refused to stop and a vehicle pursuit ensued. The vehicle pursuit ended on the 3000 block of N. 30th Street. Multiple suspects fled on foot. An 18-year-old male and a 17-year-old male were apprehended without further incident.

The detective involved is a 37-year-old male with 7 years of service with the Milwaukee Police Department. He sustained life-threatening injuries. He was transported to a local hospital and is in stable condition.