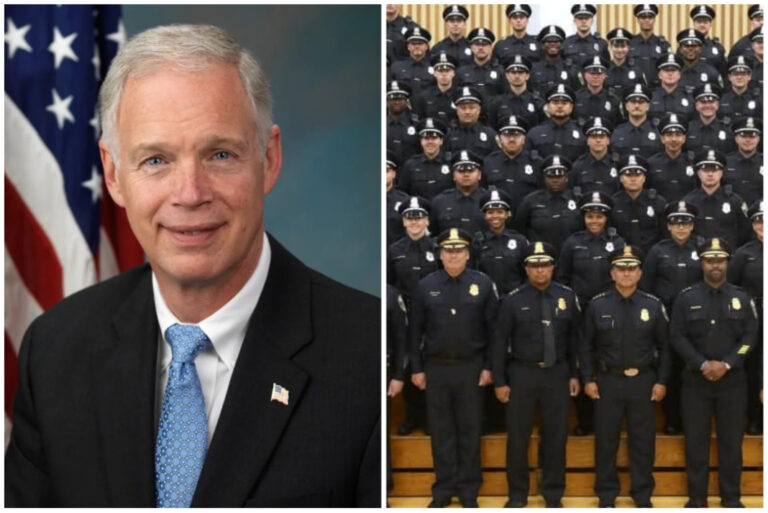 Lt. Gov. Mandela Barnes was criticized for his anti-police record by the Milwaukee Police Association, the union that represents rank-and-file Milwaukee police officers. The MPA announced that it was endorsing U.S. Senator Ron Johnson in the Senate race.

In the press call announcing the endorsement, Johnson accused Barnes of not supporting law enforcement and inciting the Kenosha riots.

Both Johnson and the MPA also sharply criticized the paroles of hundreds of violent criminals, including killers and rapists, during the Evers/Barnes administration.

“There is nothing wrong with pointing out the record of your opponent,” Johnson said, noting that Barnes also called reducing the prison population “sexy.”

Johnson said he is “so highly concerned” about the paroles.

“The parole of violent criminals is so dispiriting to law enforcement,” Johnson said. “I am so highly concerned.”

Andrew Wagner, president of the Milwaukee Police Association, said in the press call that the group is “proud to endorse Ron Johnson for U.S. Senate.” He also criticized the paroles, revealing that the MPA fought unsuccessfully to stop the paroles of cop killers released by Evers’ appointee to the Wisconsin Parole Commission.

The endorsement comes after Barnes, Johnson’s opponent, claimed two law enforcement endorsements he was later forced to remove. One of those officers said he never endorsed Barnes.

Wagner said homicide numbers have doubled in Milwaukee, and “we are on track to see more homicides than ever before.” He said quality-of-life crimes are ignored by a justice system that has “installed a revolving door and coddled criminal behavior. Criminal behavior must have consequences.”

Barnes “advocated for defunding the police and cutting the prison population by half,” said Wagner. He said MPD lost 250 officers since Barnes assumed the lieutenant governor’s position, and 400 since 2000.

“We now have to fear they (criminals) will be released under the current setting,” Wagner said. He said that society must take a stand and recognize that “certain crimes committed in our society can never be a justification for parole.”

That is the case, he believes, with cop killers.

“We held petition drives to gather petitions,” Wagner said. “We had hundreds of signatures on these petitions… they were completely ignored. They just said these cop killers would be paroled and that was it. For years, these cop killers were denied parole. I believe killing a police officer is an attack on society itself. Certain people don’t deserve parole.”

“It’s time we get back to holding our criminals accountable,” he said.

Johnson said that the “vast majority” of Americans and Wisconsinites appreciate law enforcement but “it’s unfortunately a loud and destructive minority calling for defunding.”

He said that he has been endorsed by 51 county sheriffs and the Kenosha Police Association.

He criticized Barnes’ comments at the time of the Kenosha riots; Barnes said that the shooting of Jacob Blake was a “vendetta on the part of police” even though the officer was later exonerated by a Democratic DA, Johnson said. Blake, who was wanted on a warrant, had a knife and was trying to flee the scene with children.

Johnson said prison staffing is “dangerously low” at some institutions and expressed concern over the “types of criminals paroled in Wisconsin, maybe to a city near you.” He said Barnes called reducing the prison population “sexy.”

A reporter from Wispolitics asked Johnson about Democratic criticism that some anti-Barnes ads are racist.

Johnson said he doesn’t believe the ads are racist. “This is right out of the Democrat playbook. They have no problem playing the race card at the drop of the hat basically. It’s very divisive,” he said.

A CNN reporter asked Johnson about his record on law enforcement. He said that he has always supported law enforcement whereas Barnes “incited different days of rioting in Kenosha.”