A photo of former Milwaukee Police Chief Alfonso Morales at President Donald Trump’s Aug. 17 speech in Oshkosh, Wisconsin, has drawn attention on social media, with some urging Morales to run for higher office.

The photo was posted on Aug. 17 by a Trump supporter named Christopher Lawrence, who wrote, “Chief Morales at the MAGA Rally in Oshkosh, today.” President Donald Trump gave a speech in Oshkosh that day; other photos show the same backdrop for that event as the Morales’ picture.

Mario Herrera, chairman for the Wisconsin Republican Hispanic Assembly, told Wisconsin Right Now that he agreed with the social media buzz from folks who think Morales should stay in public life. “He is the best leader Milwaukee has ever had. That man is capable of changing Milwaukee for the better. I would love to see him run for office some day,” Herrera said.

Alec Zimmerman, a spokesman for the Wisconsin Republican Party said, “Chief Morales did a great job under extraordinarily difficult circumstances and he will no doubt be successful at whatever he chooses to do next.”

Wisconsin is fired up and ready to re-elect @realDonaldTrump!

Great seeing @ScottWalker and all the Trump supporters who turned out! pic.twitter.com/e0dbKfTKPW

People on Lawrence’s page praised the former chief and wrote that they hope he runs for everything from mayor to Congress. “I saw him from afar and went up and thanked him for his service in Milwaukee. What was done to him was a shame… he’s a good man!” one person wrote. The Republican Party of Milwaukee County South Branch also shared the picture.

The comments were very different on a liberal-leaning page called The Forum, where the picture was shared.

Was there a political dimension to Morales’ firing? Was he targeted because of his politics? Some people think so. Morales was demoted by the Fire and Police Commission, which is appointed by Democratic Mayor Tom Barrett, after the FPC gave him a series of unprecedented directives but then didn’t give him the time to meet them. Morales’ lawyer has announced he is retiring and planning legal action over his demotion.

“Finally showing his true colors. Never should have been appointed Chief in the first place,” wrote a man named Sherwin Hughes, who shared the Morales Trump speech photo there. “And some people had the nerve to ask why I started the petition to force his resignation… it’s common knowledge that Morales is a Republican.” Hughes’ petition seeking Morales’ firing gained more than 6,000 signatures.

BLM activist Vaun Mayes wrote on Facebook, “He’s been a deep republican from jump..that’s why the feds and union loved him.”

“First Sheriff Clarke and now this guy… it’s like these guys were hand-picked by the KKK,” a woman wrote on that page. “TrumpWorld turd shiners,” wrote another. Others brought up Morales’ race on that page.

People on Lawrence’s page were thrilled to see Morales at the event, and they hope he stays in public life.

Here are some of those comments:

“No wonder Barrett wanted him out. His chance of being elected Mayor of Milwaukee is slim given the demographics. Maybe County Exec. Like to see him consider a state wide office or run for Congress.”

“Thank you Chief for your service.”

“Now we know the real reason they went after Milwaukee Police Chief Alfonso Morales. Now he’s free to be who he is. God bless him and all those who ‘serve and protect.'”

On the Forum page though, the comments were negative and racial. Some examples:

“I never cared for that coconut I knew when the union supported him I didn’t want to have anything to do with him they haven’t supported a chief since Harold Brier (sic) I’m glad they kicked him to the curb.”

“Wow. God knows how to get rid of the bad apples!”

One person even brought up Morales’ race. He’s Mexican-American. Kyesha Rembert wrote, “I’m sorry but Mexican’s (sic) identify as white & see themselves as ‘better than” all their other Brown counterparts …… all the time!'” It’s not the first time Morales has endured racial attacks from the left. Mayes called him a “Pinto bean head as* MF” in a post before his demotion that tagged Steve DeVougas, the chairman of the Milwaukee Fire and Police Commission, who later voted to demote Morales as chief.

Before he was demoted, the Republican Party of Wisconsin thanked Morales for coming to a defend the police event in West Allis that also caused some controversy. On Aug. 4, Rep. Jonathan Brostoff, a vocal BLM supporter, wrote on Facebook of the below event, “So… Chief Morales attended an indoor Trump rally….with no social distancing, not wearing a mask. He does realize this is what killed Herman Cain right?”

Morales told the Journal Sentinel after the above photo that he only removed his mask for the picture. It was a fundraiser to help the families of fallen officers. 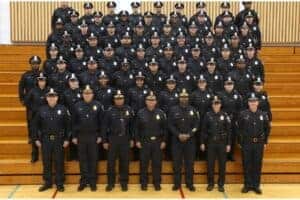