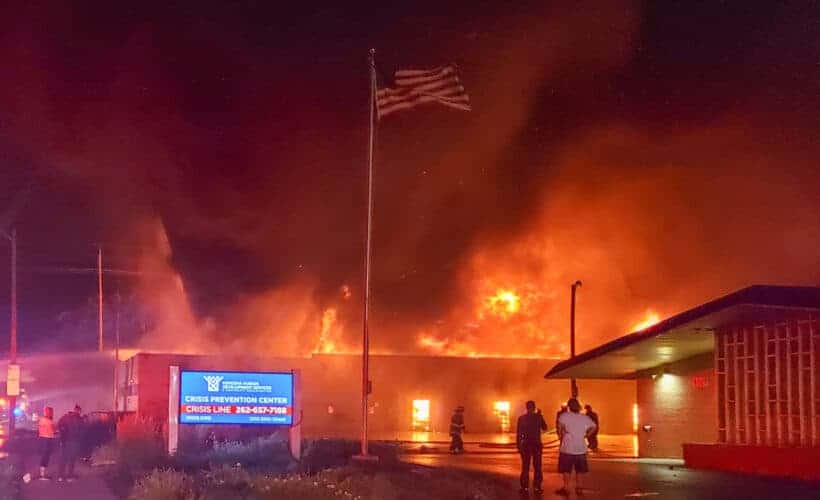 On the eve of President Trump visiting Kenosha to meet with law enforcement and survey damage after riots tore Kenosha apart, Wisconsin Gov. Evers had the stones to write a letter to the President asking him to reconsider visiting. We find this appalling.

Of course Wisconsin Attorney General Josh Kaul, who has been all but absent during the riots, tweeted: “President Trump should rethink his plans and give Kenosha residents space to heal.”

President Trump should rethink his plans and give Kenosha residents space to heal. 1/ https://t.co/3KCyPkHjlX

Wisconsin Right Now was in Kenosha several days last week. We witnessed day after day of abhorrent leadership by Gov. Evers and Kenosha leaders. Day after day, law enforcement pushed protestors and counter protesters, many armed, out of Civic Center Park and into the neighborhoods and business district, where they were then allowed free rein to get in clashes, vandalize and burn without any push back. This failed strategy led to the mass fires, destruction and fatal shootings. Those responsible need to own their disastrous response to the violence and criminal activity that erupted in that city. The Kenosha anarchy response is a textbook case of what not to do in such a situation. Officials handed over their city to criminal lawbreakers. The failure to immediately accept federal aid created a scenario that made it impossible for the rank-and-file officers to stop the mayhem. As a result, the citizens and businesses of Kenosha suffered great losses.

It’s not just us saying this. It’s business owners and residents of all races – like David Prill and Corvette Thompson – who told us they felt government pushed rioters into their neighborhoods and then abandoned them and left them to fend for themselves. As rioters burned the building across the street and then tried to smash the door of his used car business, Prill, who called police to no avail, was left to fend criminals off himself.

“Everyone was up at the park up there protesting and then the police tear gassed everybody, which I don’t think that was a great idea at all,” said Prill. “All that did was flush everybody over here to the businesses. All these people flood us after being tear gassed and pepper sprayed and now they’re already agitated…The cops stayed back there. They just let them come all the way up here. They didn’t stop them, and they ran through, and everywhere they ran through, they messed up…The police watched it happen. They had squads going up and down the road. They saw it going on.”

We hold Gov. Evers responsible for setting the stage when he made the initial premature statement about the Kenosha police shooting of Jacob Blake, which is still under investigation: “While we do not have all of the details yet, what we know for certain is that he is not the first Black man or person to have been shot or injured or mercilessly killed at the hands of individuals in law enforcement in our state or our country.”

According to JSOnline: White House Chief of Staff Mark Meadows stated Evers turned down an offer of federal help from President Donald Trump. However, Evers spokeswoman Britt Cudaback stated, “The governor informed them that we would be increasing Wisconsin National Guard support in Kenosha and therefore would not need federal assistance in response to protests but would welcome additional federal support and resources for our state’s response to COVID-19,”

There were miscommunications and delayed requests for help. According to JSOnline: Sheriff David “Beth said on Sunday night, there was a miscommunication between Kenosha County officials over who requested assistance from Evers and it turned out no one had. Since then, he said, he’s been working with the National Guard’s leader on getting more troops.”

After the fatal shooting late Wednesday night,  Governor Evers finally accepted help from President Trump. We saw the immediate response of federal officers the next day. Arrests were made and riots were squashed before they could begin. Peace was brought back to the streets overnight. The more aggressive, but arguably less visible, law enforcement intervention paid off. People congregated in the park again, and they marched down the street, but they did so peacefully, which is an American right we wholeheartedly support.

We spoke to several businesses owners last week. No one from the City of Kenosha or the State of Wisconsin has been in contact with them. Federal authorities did make contact with at least one business owner we are aware of to obtain evidence of the riots.

We witnessed the utter failure of government to get a handle on the disorder for days. We think people should be held responsible for it. They include the governor, mayor, sheriff – whoever was responsible for making law enforcement stand down in the face of anarchy.

To be clear, we are not blaming the rank-and-file law enforcement officers. They performed valiantly in exceptionally tough circumstances, standing in riot gear for hours as they were called names and pelted with fireworks and bottles. We’re blaming the people who created the strategy. Or non-strategy as it appeared. They were made to essentially stand down.

As a result, desperate citizens took things into their own hands. We witnessed a subdivision entrance being guarded by heavily armed citizens who erected a barricade to protect it. We witnessed a gas station being guarded by heavily armed people for the same reason. We saw a car dealership being guarded by people in similar fashion. We watched the video of an elderly businessman trying in vain to protect his burning business with a fire extinguisher all by himself, only to get beaten for it. Stating the obvious, but people should be able to rely on government to protect them, and they couldn’t in Kenosha. That’s completely unacceptable. Of course, a 17-year-old from Illinois, Kyle Rittenhouse, then came armed to defend person and property, and two people lost their lives in two shootings on the streets (prosecutors have charged him with criminal homicide; his lawyers say he was using self defense in the face of a vicious mob attack).

Beth said, in a Aug. 26 press conference, that, on the first day after the Jacob Blake shooting, rocks were thrown at officers, and a police officer was hit in the head. On Monday, he said the numbers of people grew, so Kenosha put out an all-call request from the state to other law enforcement agencies, and he says they showed up in the hundreds. On Monday, “we thought we put it out to the National Guard but we had our wires crossed… we didn’t actually request the National Guard the first night because we had our wires crossed,” he said. On Tuesday, they put up a fence around the courthouse, which he called a “focal point.” He said there were a “few hundred” National Guard in Kenosha. He said officers “tried to get people to leave” and then “many were taken into custody,” some for curfew violations.

All of that rhetoric sounds great on TV, except for the inexcusable bumbling failure to call the Guard in, but it doesn’t match what we saw on the streets or the ultimate destruction that occurred.

Government officials let Kenosha burn. Literally. You can watch our live stream from Tuesday night below and see for yourself. Business were burned down with impunity. Windows were smashed and cars destroyed. Graffiti was everywhere, including writing blatantly saying “kill cops.”

One Washington Post reporter we spoke to equated the unfolding scene to the movie, The Purge. He was shocked by the government response, and he said it’s done a lot differently – and better – in Chicago, where law enforcement marches alongside people and keeps general order (although what happened at the Magnificent Mile recently wasn’t very orderly.)

In Kenosha, we walked down darkened downtown streets where people were openly engaged in criminal vandalism with no law enforcement presence to try to stop or deter them. We saw people smashing windows and burning down a credit union. We lost count of the damaged and destroyed cars. Businesses boarded up and closed shop.

However, we saw no National Guard troops in the area with the greatest destruction; if they were there, they certainly weren’t visible. Where is the Guard? we kept asking (we did see a contingent Saturday. Too late.) We saw a completely inert law enforcement response. We saw violent anarchists allowed to destroy a city’s downtown, to wreck people’s businesses and livelihoods, without push back. We thought of Portland. We thought of Seattle. Downtown Kenosha was for all practical purposes an anarchist police-free zone. The only officers we saw other than those lined up at the courthouse were protecting fire scenes so the Fire Department could safely put out blazes or were driving by quickly in their squad cars.

The Kenosha Anarchy Was Visible for All to See

The mayor, John Antaramian, said on Wednesday, Aug. 26 that the city made a request “to the state for support and Gov. Evers granted for the Guard to come in…to deal with the looting and violence that had occurred. We have called for a curfew. That curfew is there to protect the public. We need to make sure people are off the streets.”

However, the new approach didn’t work.

The government’s tactics changed that night but were also disastrous. This time, people still milled in the park across from the courthouse in open violation of curfew, but we could see many openly carrying firearms – on both sides. Counter protesters, who showed up because they were upset that government allowed the city to basically burn, mixed with protesters. It was a volatile situation. Protesters threw fireworks and bottles at officers who, again, were lined up in front of the courthouse.

The curfew was a joke. We saw zero enforcement of the curfew. Some side streets were blocked off, basically funneling people downtown in the blocks around the courthouse areas. The freeway exits were blocked all the way to Illinois. That part was smart, but people just drove around that and found a way in anyhow.

It might have just petered out. Instead, law enforcement began pushing people back and out of the park, using military style vehicles and pepper spray.

This pushed the increasingly volatile crowd into city and side streets, disbursing them but doing nothing to deter the growing lawlessness or to make them go home. This disastrously culminated in volatile clashes between different groups, both heavily armed, and, ultimately, Rittenhouse shot three people, killing two of them, while being chased and attacked.

On the third day, the day after the shooting, government finally got it right. President Donald Trump announced he was sending federal law enforcement into the city, Governor Evers didn’t try to stop it, and we saw them there. The tactics had changed. The cops in riot gear were no longer lined up in front of the courthouse (a fence protected that). Instead, we saw teams of federal and local officers riding around in unmarked vehicles and stopping people they thought constituted a threat. We saw them take a person with a broken stop sign into custody. They arrested 9 people in a bus and bread truck from out-of-state who police say had vehicles filled with suspicious items, like fireworks, and were getting fuel. Is that why there were no arson fires that night?

Shame on Gov. Evers, Kenosha Leaders and Lt. Gov. Barnes for their abysmal leadership during this crisis which was focused more on scoring cheap political points than public safety. It is our hope the citizens of Kenosha and Wisconsin show their anger at the response at upcoming elections and throw these people out of office. 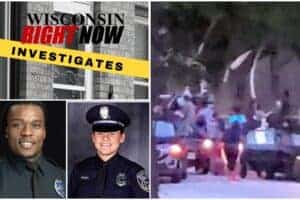 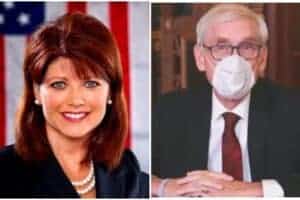