Insights From Trump’s Janesville Rally: What It’s Like Behind the Scenes

The chilly wind whipped the massive American and thin blue line flags in the gray skies as the faithful gathered in Janesville, Wisconsin, to see President Donald Trump. The crowd roared in excitement as Air Force One finally landed, and Trump made his way down a ramp to the podium. On the way out, he amused the crowd by dancing to YMCA.

The news media narrative went into overdrive when President Trump came to Janesville, on October 18. The narrative implied: how dare the president hold a rally with COVID-19 spiking in Wisconsin (no matter that no similar narrative erupted about protests and riots in Wisconsin cities.) Tweets, including from a Wisconsin congressman, implied that few people were wearing masks (that wasn’t true. Most people wore masks once the rally started, though, temperatures were checked, and we heard a security guard ordering people to put on masks or leave.)

In truth, there was so much more to observe about this rally.

We’ve decided to share our personal insights with you about Trump’s Janesville rally. We are an adult male real estate broker and former cop; an adult female journalist and educator; and a 15-year-old high school student. We attended the event to cover it as journalists. They say journalism is the “rough draft of history.” This is our contribution to that rough draft.

This is what we noticed:

During Trump’s Janesville rally, President Trump, as always, delivered an arousing speech, and although I personally don’t believe he’s all that confident in the upcoming election, he spoke with an eloquence that showed he was. Trump did get the crowd in roaring applause, chants, and an enthusiasm that Biden never could. However, he missed a few major key points that would have been a smart thing to bring up. Trump barely touched the topic of Hunter Biden’s alleged laptop, as well as the issue being safeguarded and suppressed from the public through social media sites like Facebook and Twitter. Because social media is such a predominant part of our lives, especially the lives of young people, who make up about one third of swing voters, he should have hammered the issue of Twitter and Facebook censoring the story. It’s something that people understand and can relate to, possibly because they have a personal connection with the topic at hand. We all know the benefits Trump has brought to our country; it’s why supporters do support him. It’s good to go over your strong points and improvements, to continue to prove your personal strength and benefits, but there was definitely a thin line between confidence and reassurance during his speech, a line that Trump teetered on. Swing voters and young voters are interested in ongoing events; because the political world changes rapidly, it’s all too important to stay relevant, and the relevant issue is social media bias and how it’s affecting the population, and censoring their knowledge.

This was my second time at a Trump rally; the first time it was in Milwaukee, and I only stood outside. For Trump’s Janesville rally,  Wisconsin Right Now was privileged to obtain White House press credentials, which allowed us behind-the-scenes access. I was amazed by the sea of people that I was amongst as I entered. Off site parking was almost at capacity at 3:15 p.m., and shuttle buses took us to the rally. There was an excitement and enthusiasm in the air; however, I detected an cautious optimism with people I spoke with, unlike a year ago. People stood in the blusterly wind for up to six hours, which speaks to the loyalty of Trump’s supporters. I can’t say for sure how many people were there, or if everyone got in as we were at the stage, but my guess would be several thousand people attended.

Trump’s Janesville rally honored law enforcement. The scene of the rally was very patriotic. An enormous flag flew overhead, whipping in peak gusts of 40+ mile an hour winds, lighted up against the dark cloudy sky. I couldn’t but help note the symbolism of the current state of our country.  Even President Trump marvelled at it a couple times during his speech. Seating was lined with thin blue line flags. Temperatures were taken at the entrance, and masks were handed out to supporters. Security insisted everyone around the stage  wear masks under the threat of being escorted out of the rally.

Trump did not disappoint. He had just come from another rally in Muskegon, Michigan, however you wouldnt have known it. His stage command was very impressive, especially after just combating COVID. He spoke for about an hour and a half, strong and confident, often going off script and engaging with people in the crowd. I was impressed that he touched on Wisconsin issues, like the Kenosha riots and FoxConn and he knew the local and state leaders. He discussed his successes and tried to make the case that we are safer than four years ago. He discussed economics, coronavirus, peace in the Middle East, schools, border security and health care. He touched on Biden, attacking him as being significantly less intelligent than Hilliary and said, “I did more in 47 months than Joe Biden did in 47 years,” but I couldnt but help to notice he seemed resigned to the fact he may indeed lose the election. There was a cringe worthy moment when Trump invited Senator Ron Johnson up on stage. Neither was wearing masks, and both had recently had COVID. Maybe they now believed they were both immune. Senator Johnson attempted to keep his distance from the President, but they did come come when the Senator took the podium.

I’ve covered Trump before. I saw him up close in 2015 at a Republican presidential debate in Milwaukee. We were very close to the podium this time around, and the first thing I noticed is that he seemed older than before, perhaps a bit frailer. He looked a bit like an old man whose suit didn’t quite fit properly. I don’t mean that to be disparaging. It’s just something I observed in contrast to the 2015 appearance, where he swept into the room with Melania all full of strength and vigor. The presidency ages everyone dramatically, and perhaps this president is no exception. He just recovered from COVID-19 too, of course, and he’s 74 years old and had just completed a busy rally schedule that saw him holding a rally just before this one in Michigan. I noticed he had his suit jacket buttoned. He normally doesn’t do that. In fact, the opposite is his signature look; unbuttoned suit jacket, red power tie. He wore a red MAGA hat, joking that he put it on because of the wind. It was a very windy, chilly, and gray day, but the grayness of the skies and the whipping wind gave the dramatically large flags a breathtakingly beautiful appearance. Trump also commented on that.

My counterpart at Wisconsin Right Now, Jim Piwowarczyk, commented later on Trump’s endurance. I agree with him. His endurance is astounding. He talked for a very long time (it felt like 1.5 hours), and his command of detail was extremely impressive. He seems keenly aware of micro developments in states from Wisconsin to Illinois, knew the names of local officials, and went into great depth on policy questions. Whether you agree or disagree with him on policy is up to you; what I am saying is that his speech was a very detailed, serious policy discussion punctuated by typical Trump humor and insults lobbed at opponents (he thinks Joe Biden is the worst presidential candidate ever and would be embarrassed to lose to him but conceded that Hillary Clinton was “smart.”) He covered so much ground that it’s sort of impossible to think of anything he left out.

Trump is a humorist. He probably doesn’t get enough credit for that. He’s pretty funny, and he cracked up the crowd a lot. His style is very stream of consciousness. Although there were teleprompters set up by the podium, it didn’t really seem like he used them. He comes across like he’s really just telling you what he thinks; he makes you think he’d sound exactly the same if you were sitting next to him at a dinner table or bar stool (even though he doesn’t drink). This appeals to supporters, who see him as authentic and not a typical politician. He made several comments that made me think he’s worried he won’t win this one, and he reminisced with great pleasure about the 2016 victory. He seemed like he was trying to make the closing argument to get votes. I got the impression he spoke so long, and was so policy heavy, because he really believes he’s right on policy and record and can win more votes if he can get that message through the media filter. It seemed instead like the media were looking for a gotcha line or for him to slip up; on Twitter the narrative from his Michigan rally shortly before he landed in Janesville focused on comments he made about the Michigan governor being arrested (because there was a recent kidnapping plot foiled against her). Trump is a hyperbolic, even theatrical speaker. But really Trump’s Janesville comments were mostly substantive and issue-heavy. He spoke a lot about law and order. He seemed to be pining for an alternative election in which he would have run against Bernie Sanders instead, commenting over and over again about how Elizabeth Warren staying in the race cost Bernie the nomination. He tried to imply Biden is controlled by others. I was surprised he didn’t talk about big tech more. He made one fleeting reference to it, and it got a huge reaction from the audience, but he moved quickly on.

Most people wore masks as the rally started. Volunteers handed out MAGA hats. The crowd was large and brought over in shuttle buses, and it’s not clear whether everyone got in. People were enthusiastic and seemed to have a true emotional connection to Trump. The people we talked to believe Trump genuinely loves this country. Trump said he’s lost billions of dollars because of the presidency, but he said the job was too important not to do. The crowd definitely dislikes the news media; they were shouting “CNN sucks” before Trump arrived. We saw one man walking around in Revolutionary War style garb.

There was a real electric energy at the rally. Trump has true believers. The message focused on law enforcement. Many people held Cops for Trump signs.

The most striking aspect of the rally was the massive thin blue line and American flags that whipped in the chilly wind against the gray backdrop. That was quite a site to behold. People started gathering around 2:30 p.m. and eagerly stood for hours in the cold. 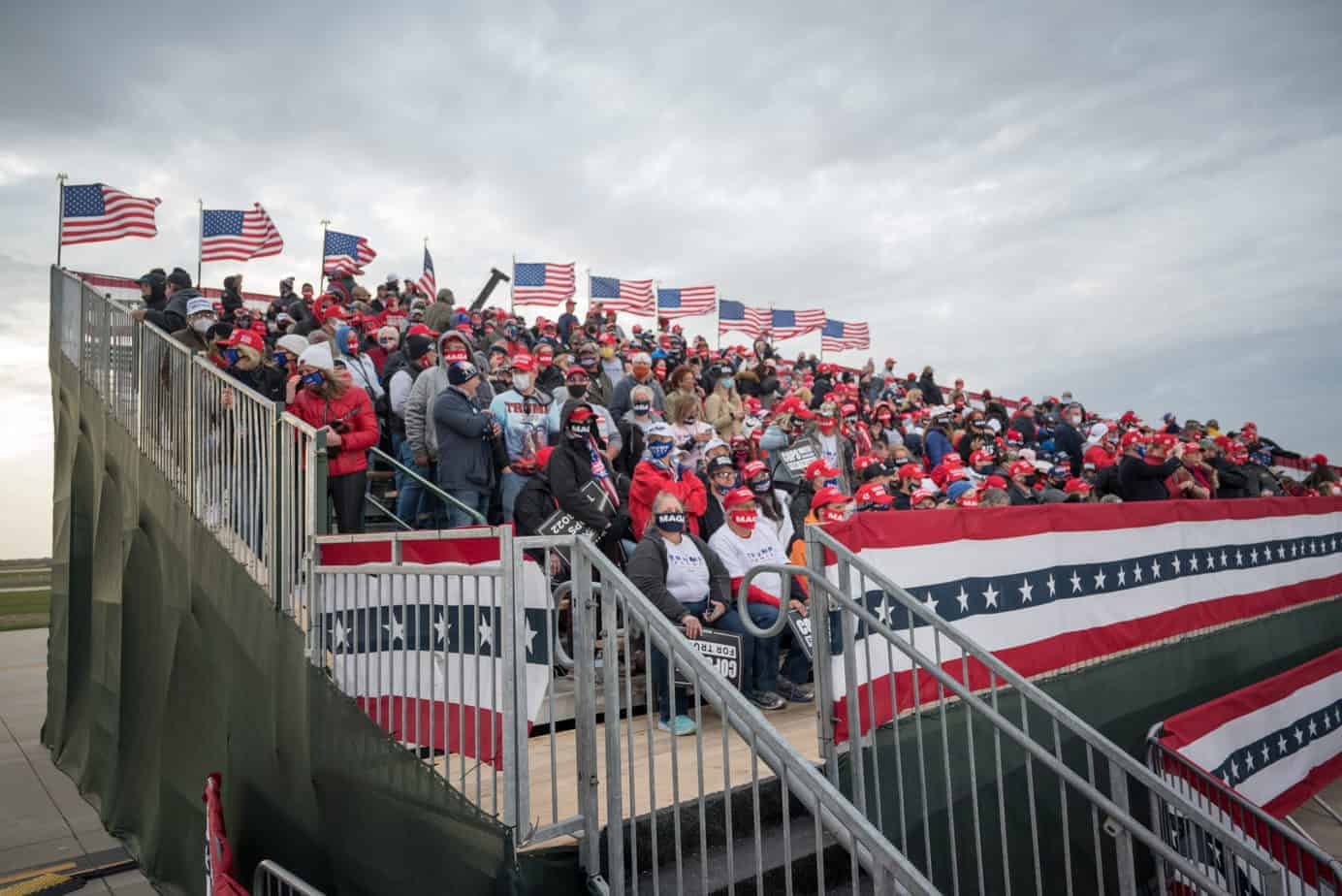 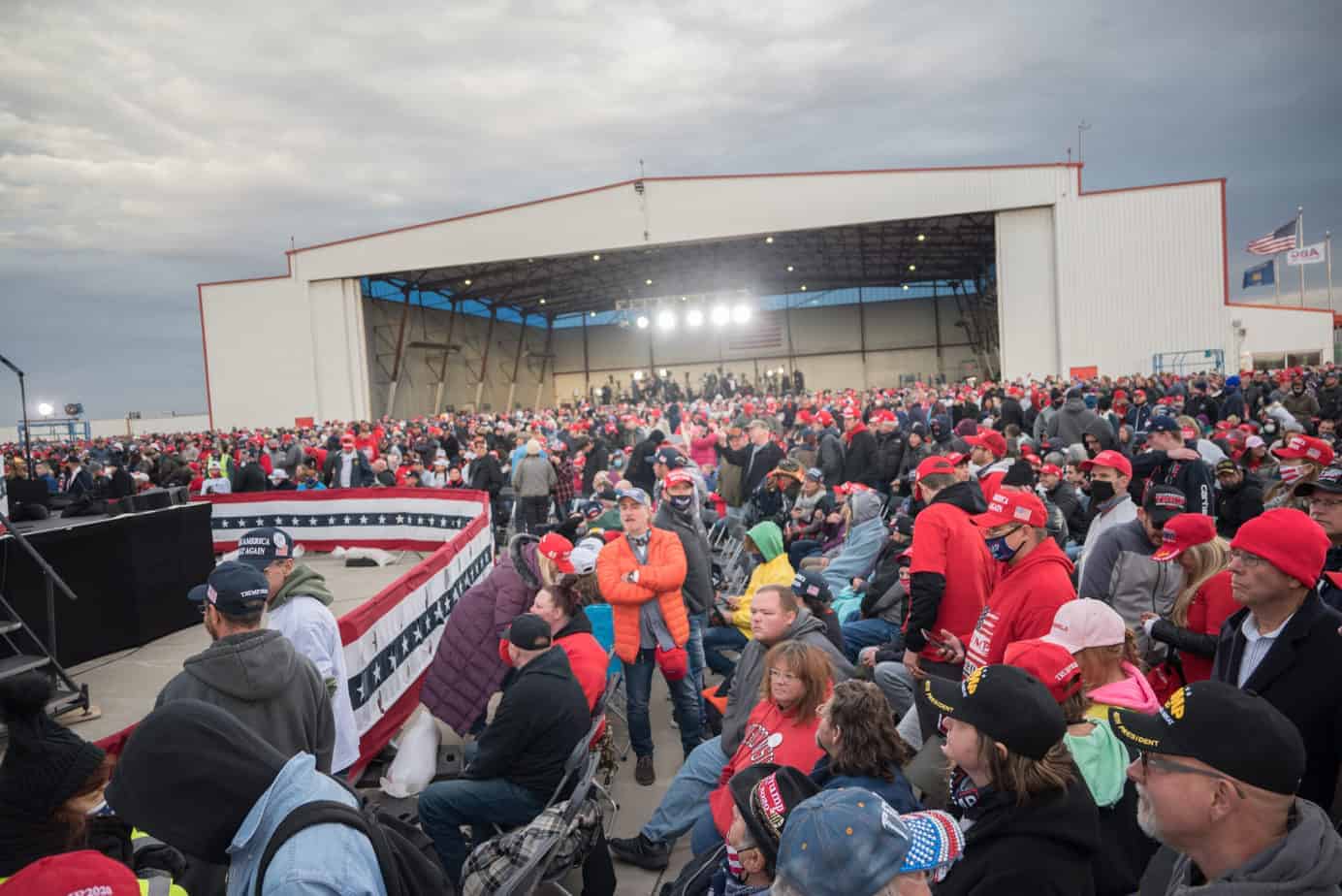 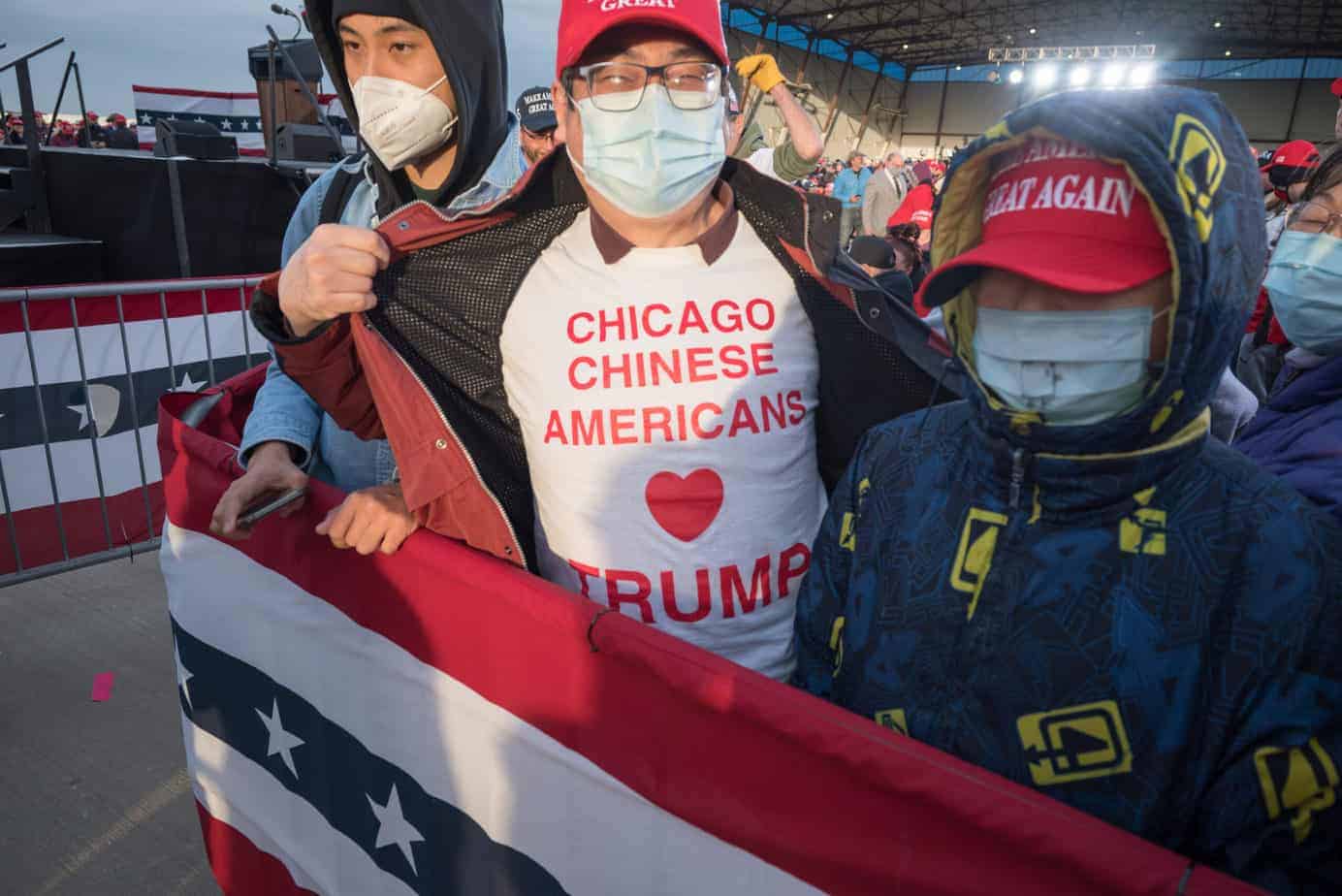 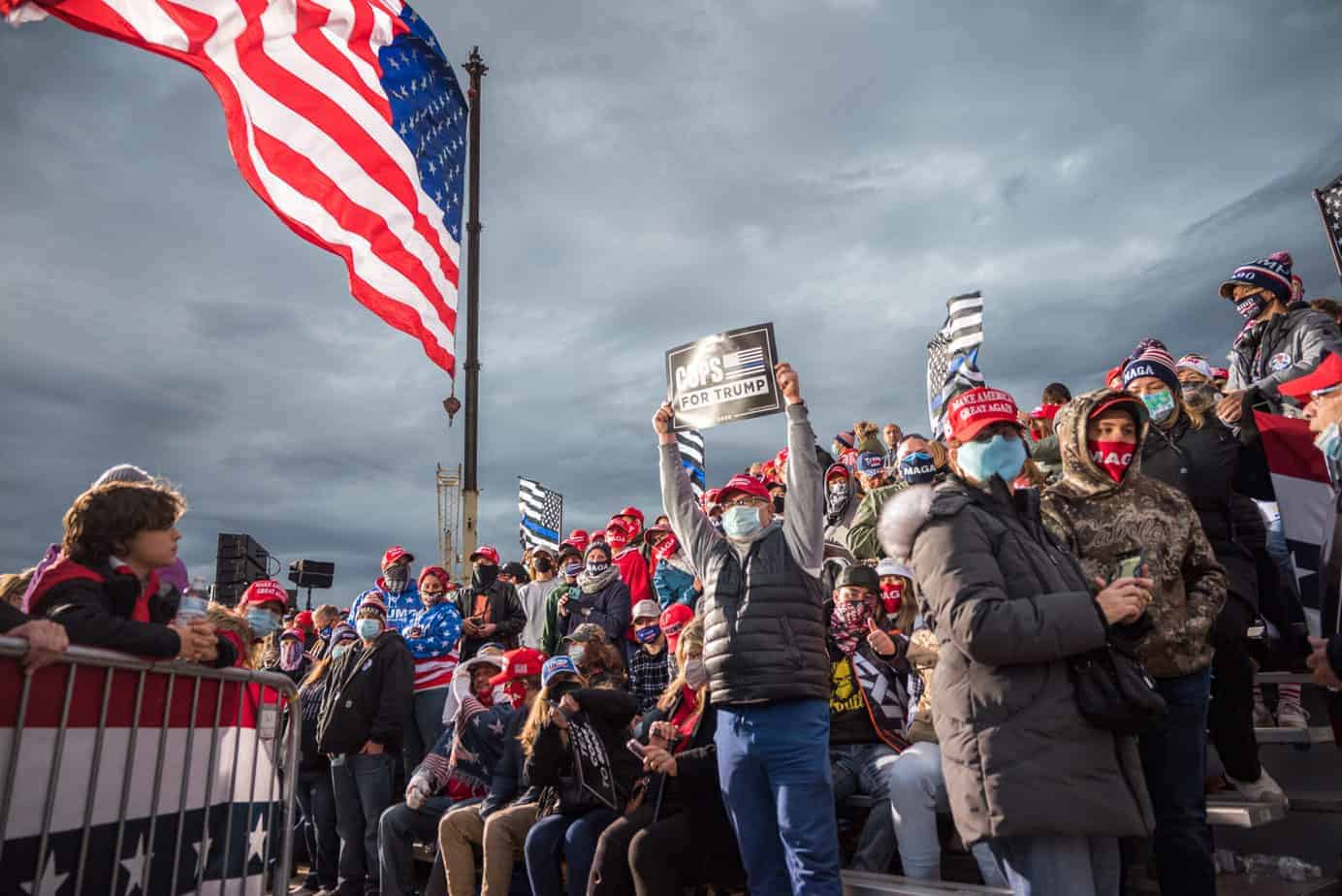 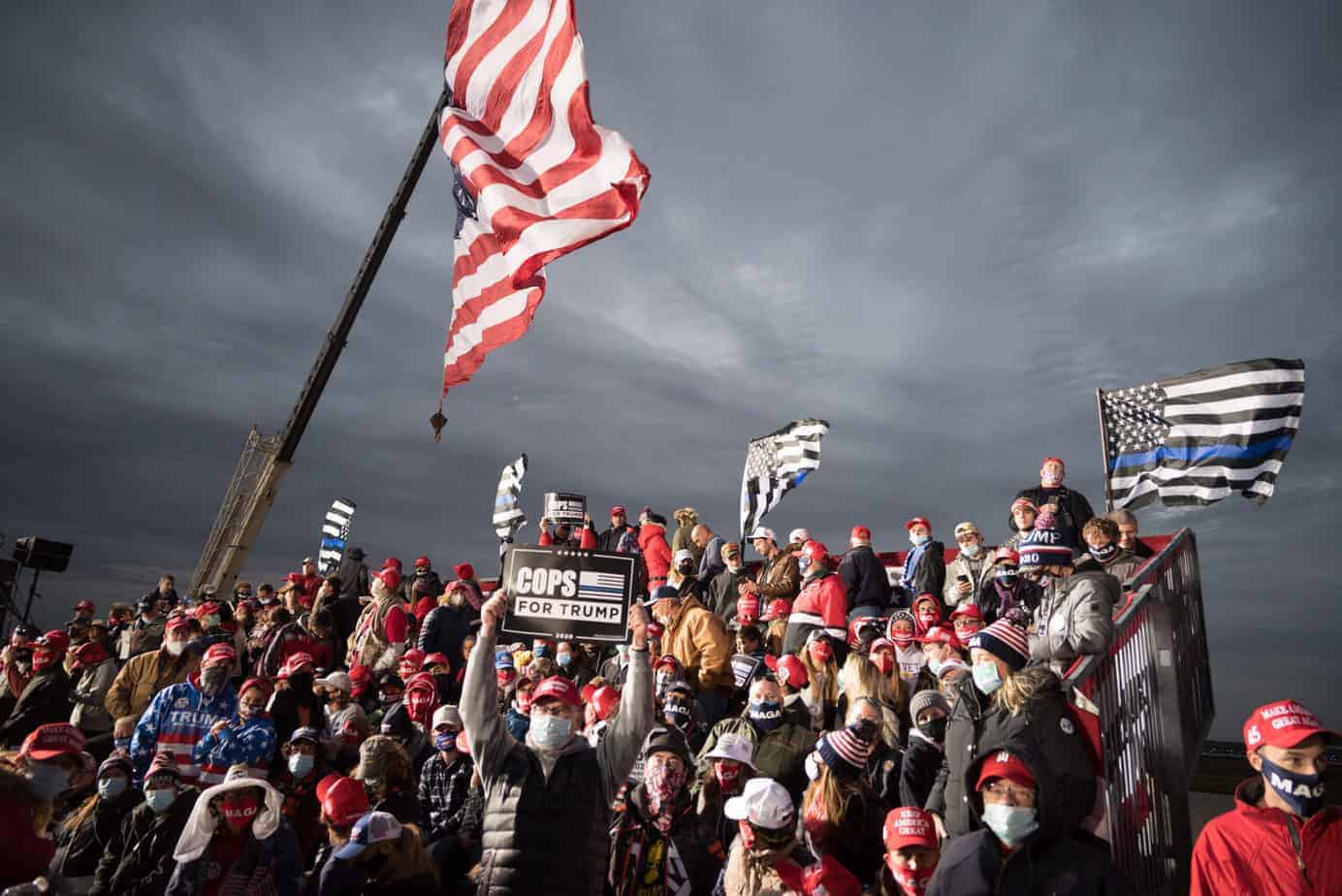 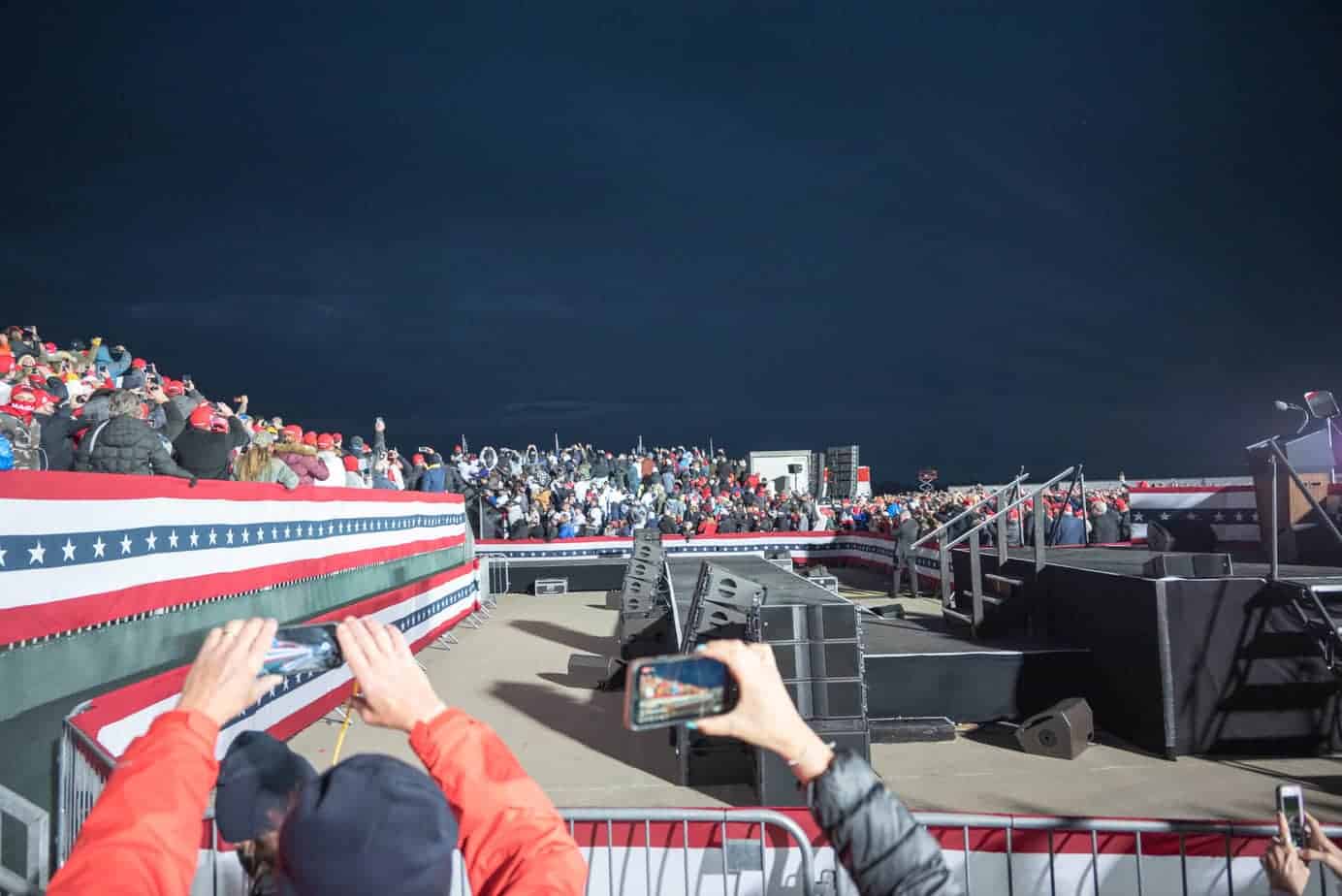 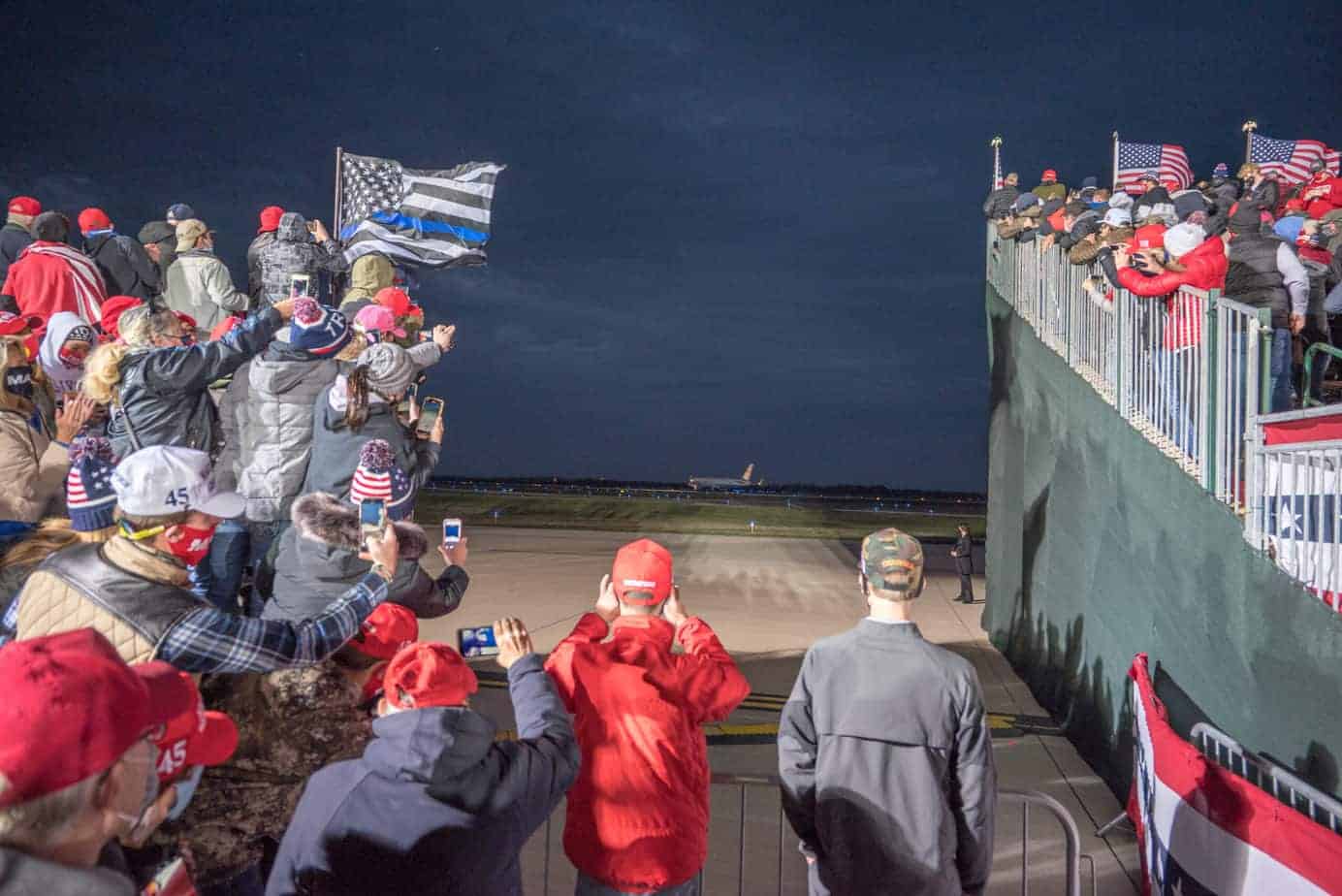