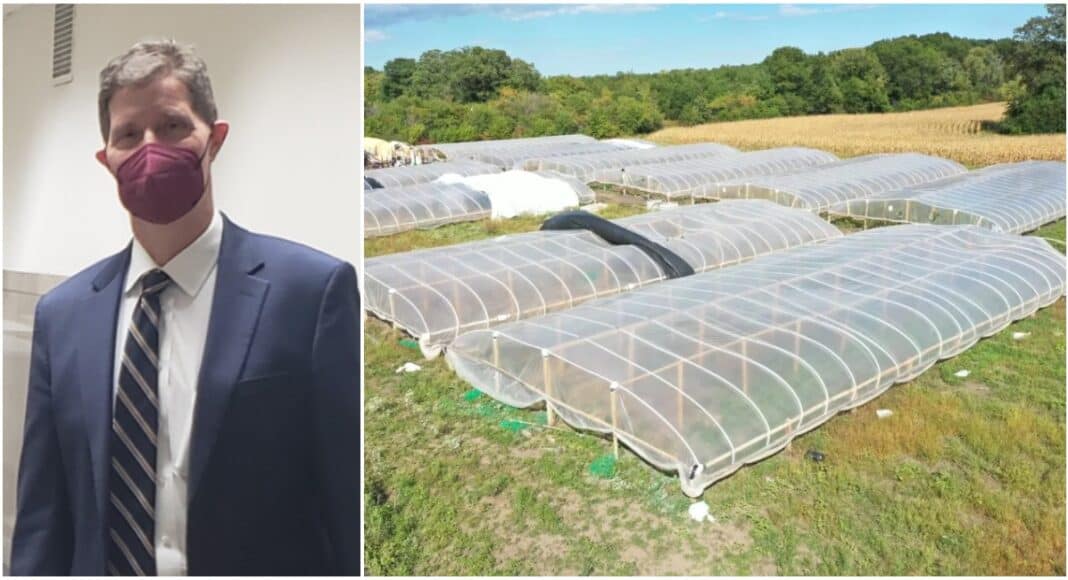 EXCLUSIVE: Chisholm on Franklin Marijuana Grow, ‘We’re Just Going to Have to Get Used to This’

“I’m not critical of the Franklin police or the people in Franklin, who probably aren’t wild about a potential illegal marijuana” operation – DA John Chisholm, whose office told police to stop a search of the massive grow.

We confronted District Attorney John Chisholm in the hallway outside his courthouse office and asked the questions we couldn’t get answers to before: Why hasn’t his office filed criminal charges into the massive alleged marijuana grow in Franklin, which we were first to report about on Sept. 19?

“Quite frankly, we’re just going to have to get used to this,” Chisholm told Wisconsin Right Now. “We’re moving increasingly to more of a regulatory intervention as opposed to law enforcement intervention on marijuana.”

In his first comments on the grow, which sources say tested well over the legal limit for hemp, making it marijuana, the DA blamed police, saying they “probably should not have” executed the search warrant, even though it was signed by a judge, William Sosnay. He said the state crime lab, run by his fellow Democrat Josh Kaul, makes it difficult to prosecute illegal marijuana cases because they won’t do quantitative testing needed to tell whether it’s marijuana or hemp, which he labeled a “problem.” He acknowledged a prosecutor from his office signed off on the search warrant in advance, and he admitted his office then advised Franklin police to stop their search midway through it.

The grow, which consists of 11 greenhouses and even tents, has sat for weeks unattended and upsetting neighbors. Workers without identification were coming and going from the property.

“It’s not going anywhere,” Chisholm said of the massive grow. He said he told the Franklin police chief that “I’m not critical of the Franklin police or the people in Franklin, who probably aren’t wild about a potential illegal marijuana” operation.

That fact has upset a lot of people in Franklin, from the mayor to neighbors to a county supervisor. On Sept. 24, we reported exclusively that the Franklin mayor, Steve Olson, was upset with Chisholm, saying, “John Chisholm is the DA for Franklin as he is for the City of Milwaukee. He has to recognize community standards in his entire jurisdiction. We pay his salary too…Who gave John Chisholm the authority to ignore a substantial violation of any law?” A source told us the Wisconsin Department of Agricultural is now planning on burning the grow soon, which Chisholm told us he didn’t know about.

We spoke with Milwaukee County Supervisor Patti Logsdon. The grow operation is in her district. Logsdon said she had been made aware of the situation by a constituent, that she was very concerned about it and is continuing to investigate.

But until now the DA hasn’t commented publicly himself on the matter. 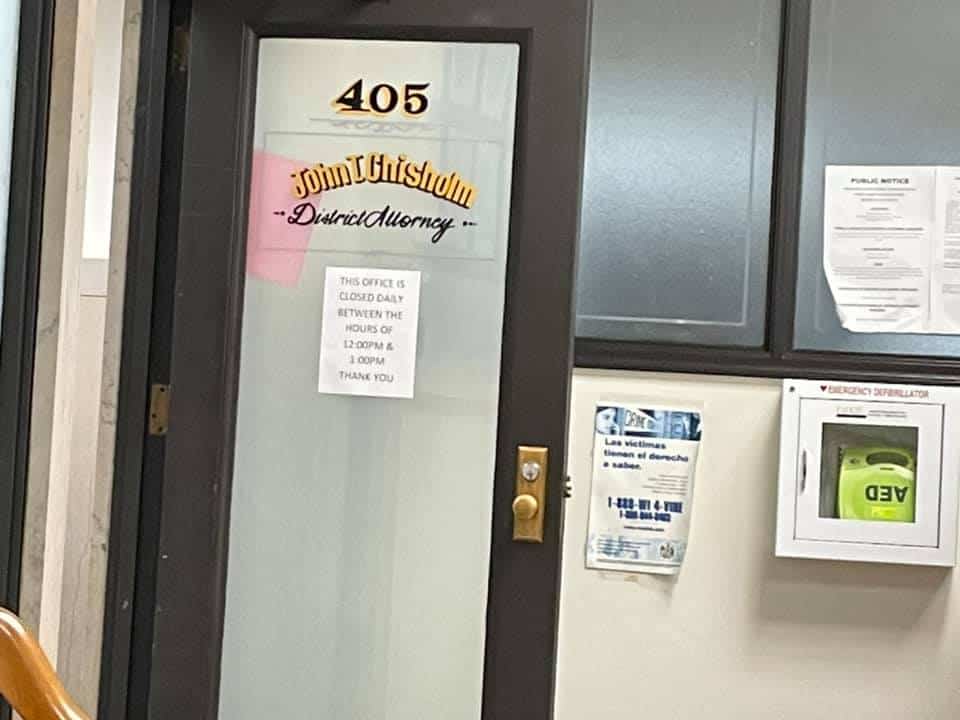 “We said they should stop (the search) until they could ascertain, that meant they had to stop whatever phase they were at and confirm” that it was marijuana, not hemp, Chisholm acknowledged to Wisconsin Right Now, of what his office told Franklin police.

“That’s the other problem. The Wisconsin crime lab won’t do a qualitative for it. They don’t do it,” Chisholm said.

The DA proclaimed that he did not know that police have now tested samples from the grow, determining it was marijuana, as sources have told us, and he said the laws legalizing hemp have made it difficult to prosecute illegal marijuana.

The grow is located not far from a school, not far from the police department, and in a neighborhood populated with families, and sources estimated it’s worth millions of dollars in plants.

Multiple sources have confirmed to us that samples taken from the grow tested over 10% THC which is well over the hemp limit of .4%, making it marijuana, which is still illegal in Wisconsin.

We’d asked Chisholm for comment before through his spokesman, but we didn’t hear back. When we approached him in the courthouse on Oct. 6, he was cordial and talkative. “Hi, how are you doing?” he said. We spoke with him about a variety of topics. This is our first story on his comments.

We asked if he thinks marijuana should be legalized, and he said, “The time has come to move away from criminal regulation and move toward licensing regulation. Law enforcement will still be in the business of enforcing it. It will just be different.” If the drug is given to kids, it could still be criminal, he said. “You’re not going to be kicking doors down to recover a couple pounds of marijuana.”

We asked Chisholm point-blank why there haven’t been criminal charges issued in connection with the Franklin marijuana grow.

He said, “Number one, it hasn’t been referred.” But sources tell us that’s because the DA’s office stopped the search of the property, making police believe they wouldn’t charge it.

Chisholm said Franklin police executed a search warrant and “they probably should not have. That’s the problem.”

We again told Chisholm that multiple sources say the samples tested way over the legal limit for hemp, making the plants marijuana.

“We don’t know that yet,” he claimed.

He said that police needed to determine that before the search warrant. “That’s it,” he said.

We asked him about whether the marijuana is being burned tomorrow, as a source told us. “I don’t know that, either,” he said.

We asked if the case is referred if he can’t still charge it because he thinks the search is invalid. “Don’t know,” he said.

“This came up on the day after they executed the search warrant, the owners came out and say basically look this is hemp. From that point on, it was like, okay make sure it’s actually illegal versus hemp. I don’t more anything beyond that except we told them they had to actually confirm it’s actually prohibited marijuana before you go any further than that,” said Chisholm.

Again, we told Chisholm that multiple sources say it tested at levels that are clearly marijuana. Again, we asked if he knew about that, and whether he could do anything about it as a result of those tests. “No,” he said. “It’s possible. But it’s going to be complicated.”

We pointed out a judge signed the search warrant and asked if the judge was wrong.

“Well, it was actually reviewed by an assistant DA, but it wasn’t a drug DA. They took it to the nighttime DA,” Chisholm revealed. “That’s what you’re dealing with. That’s our concern. We expressed that at the time. Not that anyone did anything intentionally wrong. But you’re in a new world now, that’s really what it comes down to. If this was five years ago, all you needed to do was get a sample that tested positive, that’s good enough, you get your search warrant and execute it. You can’t do that today.”

He said that’s because hemp is legal. He said there could have been other violations, such as licensing violations. “That’s handled differently. Quite frankly, we’re just going to have to get used to this,” he said. “We’re moving increasingly to a more of a regulatory intervention as opposed to law enforcement intervention on marijuana.”

He said it comes down to what you have in the affidavit. “You can be 100% but if it’s not supported in the affidavit,” it could create a motion leading to suppress to the evidence.

He noted there can be good faith provisions to allow searches.

“No question,” he said, when asked if he thought the police were there in good faith.

He said the confidential informants listed in the affidavit were not enough for a valid search (again, even though Judge William Sosnay signed off on it).

We asked what would have been enough. He said that the plants need to test over a certain threshold to be marijuana. But the only thing a field test would tell you was the presence for THC which is “not enough.”

We asked what police should have done instead.

“You have to slow it down.”

Police, he said, “have to do it right, have to slow it down. Have to recognize you’re dealing with a different dynamic.”

He said they could have driven up, asked to take consensual samples, or get a confidential informant to make a buy (even though there’s no indication the plants were being sold on the property – only grown).

According to the search warrant affidavit, Franklin police began to investigate the operation after receiving information from three confidential informants.

The three confidential informants all reported being on the property in either July or August and observing the Franklin marijuana grow operation. All three stated they were familiar with marijuana with one estimating 3,500 total marijuana plants. Another reported being confronted by two Hispanic males in two cars in a threatening manner, the search warrant alleges.

The investigating officer reported smelling a strong odor of marijuana while attempting to take photos of the greenhouses from a neighboring property. We smelled a similar odor wafting over from the grow when interviewing the landowner.

The state Department of Agriculture was contacted for a list of licensed hemp farms. There was no license issued for the address of the operation; however, there was a permit issued for an address nearby that did not exist, according to the search warrant.

The warrant identifies the LLC that leased the land as Green Haven Fields, LLC. We contacted the Department of Agriculture to obtain the permit and find out whether the state ever inspected the grow but were told it will take many days to answer our questions as it would be handled as an open records request.

A traffic stop was initiated by police on a vehicle that had left the property. Police reported a strong odor of marijuana coming from inside the vehicle. The two occupants did not have identification and stated they were from Mexico. There was a small quantity of marijuana found on the back legs of the two occupants; however, they were released on the scene.

Franklin Police obtained the signed search warrant from Milwaukee County Circuit Judge William Sosnay and executed it on September 1. According to sources, after they executed the warrant, they contacted John Chisholm’s office. Chisholm’s office reviewed the affidavit for the search warrant and told officers to leave the scene and not seize sealed packages of suspected marijuana bud. Bud is the part of the plant that contains high level of THC.

According to the search warrant return, there were 14 samples seized. WRN has learned that the samples were sent to a laboratory for testing. The samples did test positive for levels of THC that are found in marijuana as opposed to hemp, the sources said.

Milwaukee Police Department Could Lose Hundreds of Officers Next 3 Years