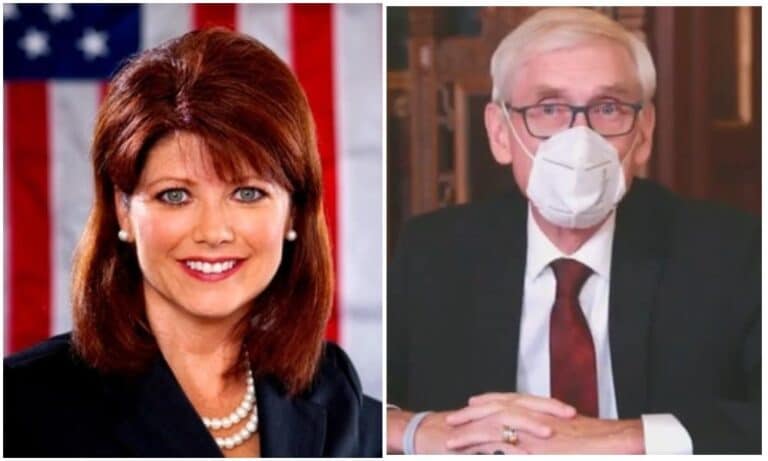 Tony Evers failed to meet the moment on everything that 2020 threw at us. Last week, when he addressed the state of the state, he conveniently failed to mention our cities burning, students suffering, or his botched vaccine rollout.
He did find time to throw more partisan punches at the Wisconsin Legislature over a failure that is entirely his own. When addressing the scandal at the unemployment insurance system, the governor wasted no time blaming Republicans and ducking any responsibility for himself.

With Tony Evers, the theme seems to be that the buck always stops somewhere else.

Wisconsinites are hurting. Throughout the spring and over the summer, tens of thousands of our friends, family members, and neighbors waited anxiously to receive basic government benefits owed to them. People like Lachel, a mom in Milwaukee who waited twenty-five weeks for the relief she was owed. Or Erin, a resident of the town of Oregon who spent three months accumulating bills before the bureaucrats finally reached her case in the backlog. The consequences of this failure in the lives of real people are huge: a lack of money for groceries or prescription drugs, ruinous credit card debt, even eviction and homelessness.

Tony Evers and his government shuttered Wisconsin businesses with one-size-fits-all lock downs, but failed to have any plan in place to handle the huge influx of new unemployment cases that would obviously result. We know that Tony Evers’ team only answered 1% of the calls that came in seeking information and assistance. At the height of the backlog, over 100,000 Wisconsinites were left waiting for benefits.

Call it what you want — incompetence, big government gone bad. Maybe it’s a governor who has spent his entire life in government jobs and is unable to understand the impact of his policies on real people living outside the comfort and security he has known in his adult life. He is out of touch with regular people.

Now Evers is trying to grab a victory from his own bungled losses by declaring a special session of the Legislature and asking for more government funding for IT upgrades. His own actions betray the fact that he’s just playing politics with this new “plan.” The unemployment crisis started in March when the shutdown hit. For months, Evers let the backlog build up and persist. Finally, in October, he brought in reinforcements, hiring Google Cloud to get things under control. With sufficient IT support and private sector expertise, the backlog was cleared within two months. In fact, the Legislature themselves have detailed how Evers can use existing authority to start on a long-term solution almost immediately. His awkwardly forced outrage in his state of the state video was as false as it felt.

There are three obvious questions. First, if Google could fix this in two months, why did he wait until October rather than hiring them in April or May when the crisis was peaking? The answer is probably that Evers trusts his bureaucrats way too much and is loath to hire outside contractors, which angers the state employee unions.

Second, why does Evers think he now needs new authority from the Legislature for IT upgrades and procurement when he apparently already had the authority to fix this? Third, if Evers felt the IT system was poor, why didn’t he fix it in the year before COVID hit, he shut down the economy and left thousands on hold? The questions show this is nothing more than a stunt aimed at ducking the blame.

When everything becomes a political chess match in Madison, Wisconsinites become expendable pawns to a governor who doesn’t understand the daily struggles of regular families. Instead of trying to score cheap political points against the Legislature, or potentially kick an actual solution down the road through the state budget process, Evers should own up, lead, and fix it with existing sufficient authority. But I’m not holding my breath.