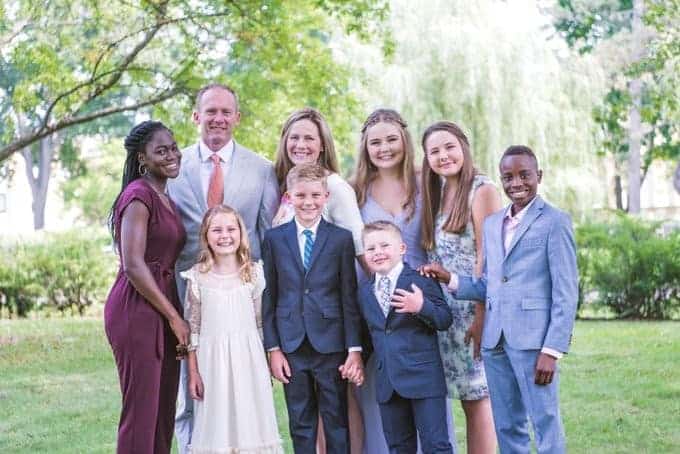 That didn’t take the “tolerant” left very long. Although they probably won’t be able to accuse Amy Barrett of supposedly misbehaving at a high school beer party decades ago or gang raping someone without evidence, some liberals’ attempts to smear Donald Trump’s new Supreme Court nominee are appalling.

They’re trashing her children, motherhood, and her religion. And that was just in the few hours after Trump unveiled Barrett was his choice to replace Ruth Bader Ginsburg. It wasn’t only tweets. Comedian Bill Maher said, “She’s a f**king nut… Catholic. Really Catholic. Like, speaking in tongues.” 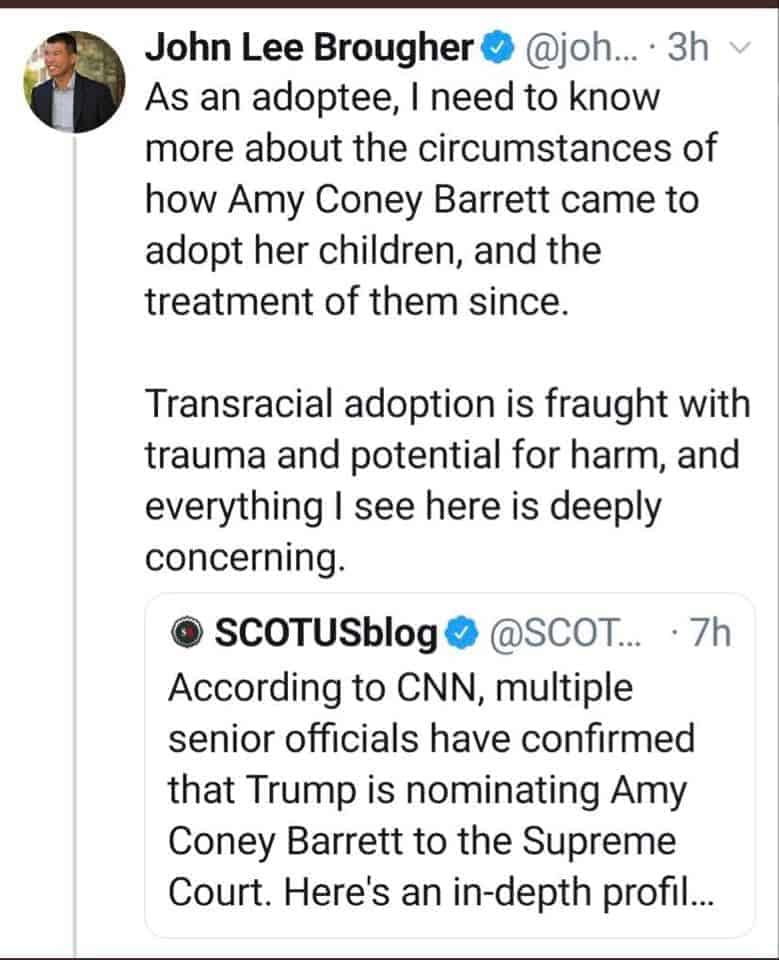 John Lee Brougher is managing director of the NextGen America PAC. He tweeted, “As an adoptee, I need to know more about the circumstances of how Amy Coney Barrett came to adopt her children, and the treatment of them since. Transracial adoption is fraught with trauma and potential for harm.”

2. Questioning the Legality of Barrett’s Adoptions 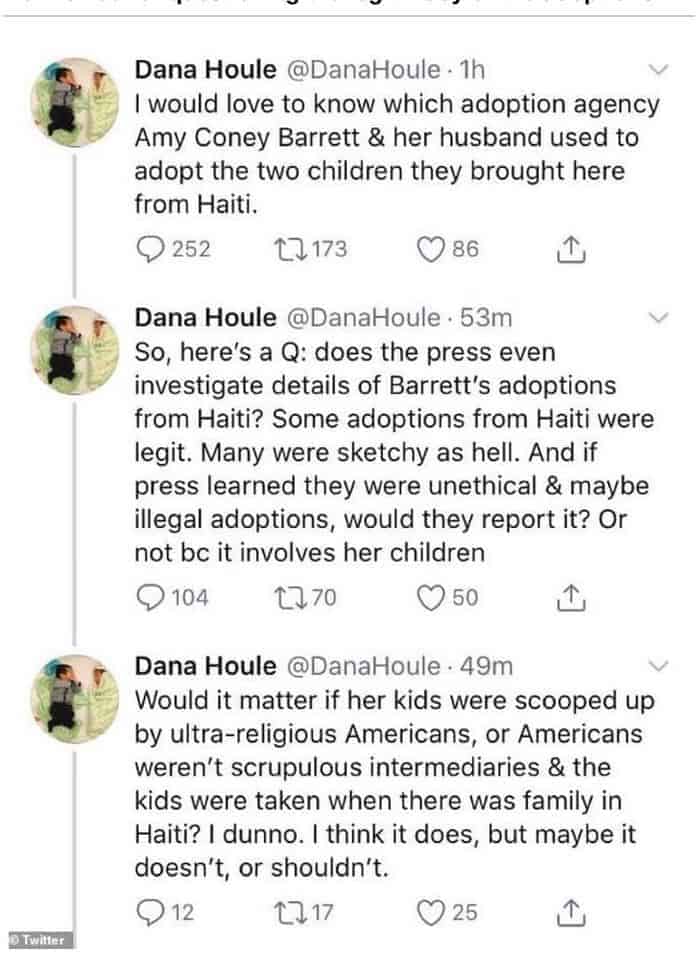 According to Boston Review, Dana Houle, “served as Chief of Staff for former U.S. Rep. Paul Hodes and campaign manager for Hodes and for U.S. Rep. Jim Himes.”

Houle tweeted, “I would love to know which adoption agency Amy Coney Barrett & her husband used to adopt the two children they brought here from Haiti. So, here’s a Q: does the press even investigate details of Barrett’s adoptions from Haiti? Some adoptions from Haiti were legit. Many were sketchy as hell. And if the press learned they were unethical & maybe illegal adoptions, would they report it? Or not bc it involves her children. Would it matter if her kids were scooped up by ultra-religious Americans, or Americans weren’t scrupulous intermediaries & the kids were taken when there was family in Haiti? I dunno. I think it does, but maybe it doesn’t, or shouldn’t.”

She tweeted, “I guess one of the things I don’t understand about Amy Comey Barrett is how a potential Supreme Court justice can also be a loving, present mom to seven kids? Is this like the Kardashians stuffing nannies in the closet and pretending they’ve drawn their own baths for their kids. And if there aren’t enough hours in the day for her to work and mother those kids, when she portrays herself as a home-centered Catholic who puts family over career, isn’t she telling a lie?”

She added, “Anyway, more power to ACB and her ability to raise 7 kids. My only problem with her is that I believe she’ll make abortion illegal, destroy any chance for national childcare, and gut healthcare. But besides that she is an inspiration and a girl boss.”

That’s not all. She also wrote, “When she’s trotted out as an icon of motherhood, which she will be now, often, let’s remember that she may make young women have kids they didn’t want and aren’t ready for–and when they do, they’re on their own. She’s certainly not going to advocate for subsidized child care.” 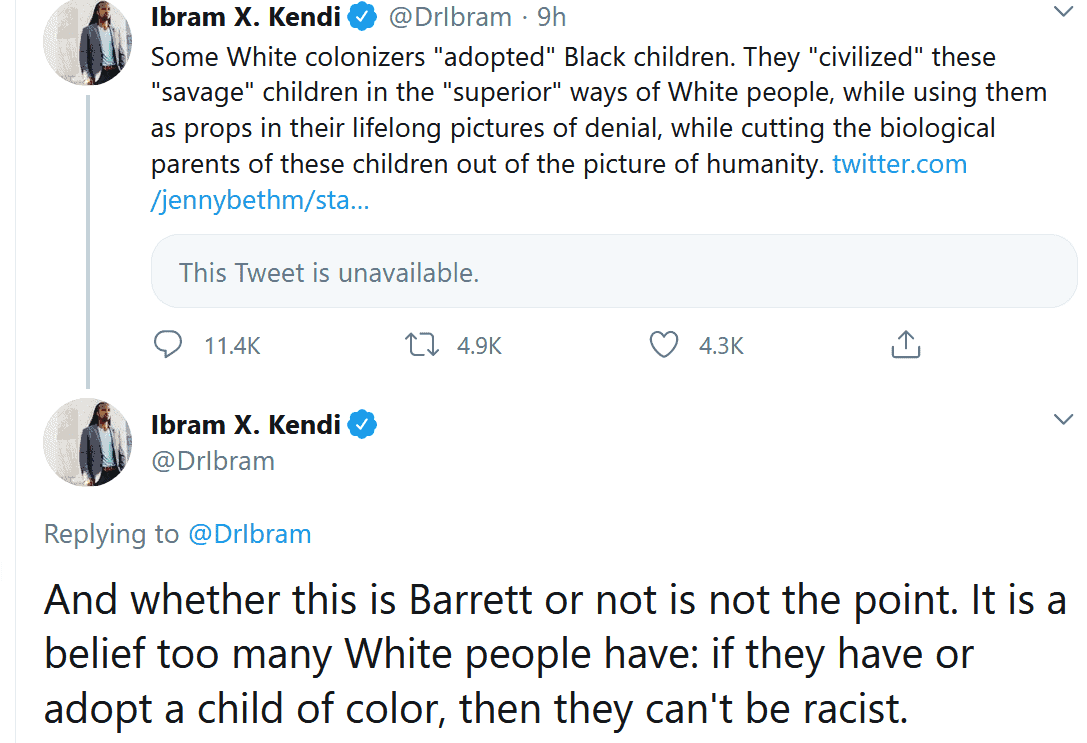 Ibram X. Kendi was named one of Time Magazine’s most influential people.

Kendi tweeted, “Some White colonizers ‘adopted’ Black children. They ‘civilized’ these ‘savage’ children in the ‘superior’ ways of White people, while using them as props in their lifelong pictures of denial, while cutting the biological parents of these children out of the picture of humanity. And whether this is Barrett or not is not the point. It is a belief too many White people have: if they have or adopt a child of color, then they can’t be racist.”

Emily Zeller, who labels herself a massage therapist on Twitter, wrote, “If Jesus is real, Amy Comey Barrett is going to hell. (Spoiler alert: he’s not. But she probably is.) (JK hell isn’t real either. But she deserves to go there if it were.)”

A woman named Deb Richmond, who describes herself as a teacher, wrote, “This woman is a monster who will support trump’s continued destruction of human rights in our country. She’s in the cult that inspired #TheHandmaidsTale.” (Actually, the author of The Handmaids Tale told Politico she’s not sure whether People of Praise inspired the book; previous stories indicated a different Catholic group inspired the book.)

Christopher R. Walker, who describes himself as a linguist, wrote, “She’s nutty and more than a little Culty and also the best line of attack for dems is about fairness and process. pretty sure you can keep both thoughts in your head at once, even if some of us are talking about how nutty and Culty she is.”

He added, “I’m personally outraged at all the outrage over the outrage about amy coney barrett’s moralizing Neo-colonialist lifestyle.”

8. Questioning Her ‘Conscience’ Simply Because She Accepted the Nomination

Some want Barrett disqualified because… she accepted the nomination.