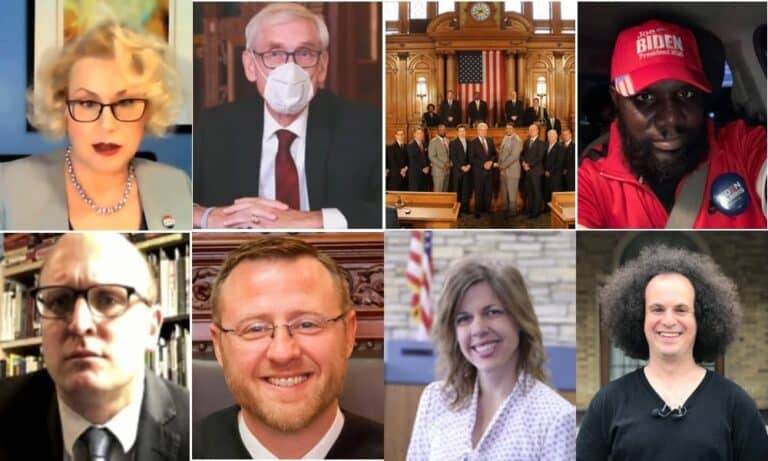 Wisconsin Right Now‘s first annual wall of shame awards are here: Who are the top 30 LOSERS of 2020?

Yes, sadly, there were a lot of them.

1. The Milwaukee Fire and Police Commission

Could there be a bigger group of losers than this crew? The commissioners completely botched the demotion of Chief Morales (they didn’t even let him speak and never told him what formal charges he was even facing). A judge reversed the demotion. A commissioner quit because of the dysfunction. The then-commission chair Steven DeVougas appeared at a press conference alongside a BLM leader right before the demotion. The board couldn’t even decide on a new police chief, repeatedly deadlocking 3-3. Meanwhile the city reaches historic homicide highs. While Rome burned…

There’s almost no one as nasty and ineffective in elected office as Milwaukee’s state Rep. Jonathan Brostoff, who spends his time calling people childish names on Facebook, calling curfews that prevent cities from burning “racist,” trashing police, and supporting virulently anti-police efforts in other cities rather than focusing on his own district.

Clancy is so far out there that he even apologized to the People’s Revolution, whose member is accused of discharging a firearm at a police officer. Madison’s loony mayor, Satya Rhodes-Conway, apologized for a video supporting police, and she chose to NEGLECT taking any action as State Street burned.

This guy has done a lot of sketchy stuff, but the worst of it came when he released a statement after a member of the People’s Revolution was accused of discharging a gun in the direction of a Milwaukee police officer. It didn’t match reality – or the details in the criminal complaint against the protester.

Evers dawdled while Kenosha burned, his administration completely screwed up unemployment benefits for needy Wisconsinites, it stalled on getting a Neenah COVID-19 testing center up, and his wet noodle leadership even enraged Democrats as the presidential election loomed. He showed zero concern for what his draconian actions were doing to struggling small businesses. Evers issued a statement only hours after the Jacob Blake shooting implying fault by the officer and using inflamed, reckless language, including the term “mercilessly killed.” Governor Evers’ Kenosha statement was an affront to due process and helped fuel an already dangerous situation. In addition, the state seems slow to roll out the COVID-19 vaccine.

The newspaper bent over backwards to sanitize the anti-police movement. There was a time when the newspaper set the agenda in the community, but now it routinely misses big stories, the newsroom is a ghost town, and conservatives have given up on reading it anymore.

Kenosha County leaders allowed Kenosha to burn. The rank-and-file did their jobs, but Kenosha County leaders – the mayor and the sheriff – concocted an abysmally ineffective strategy to push rioters into residential and business neighborhoods and then let everyone there fend for themselves.

Graveley overcharged Kyle Rittenhouse, who has a very viable self defense case. For starters, first-degree intentional homicide just doesn’t fit a scenario in which a teenager shot a child molester who was chasing him, had cornered him, and had thrown something at him, as another gunshot rang out nearby almost simultaneously. In addition, Graveley took forever to make a decision in the Jacob Blake shooting, and he and the AG punted the analysis to a retired police chief (no decision has been made.) He was also texting a Black Lives Matter activist.

Alderman Nik Kovac has been wrong on almost everything this year. He was among the aldermen who rejected $10 million in federal grant money for more police officers. He was part of a group of aldermen who called Donald Trump’s recount request “purely evil” and racist. He signed a press release trashing Democratic lawyer Frank Gimbel as a racist. What has he done that’s productive? Or to solve the city’s very real disparities?

Ronald Bell, a member of the People’s Revolution, is accused of discharging a gun at police officer Joseph Mensah at a ridiculously dangerous situation at his girlfriend’s house. The Peoples Revolution has focused on the wrong targets. As we just noted and have written about, there are very real and troubling racial disparities in Milwaukee that everyone should care about (poverty, graduation rates, and so forth). The police didn’t cause them.

On his way out the door, Wauwatosa Schools Superintendent Phil Ertl kicked taxpayers squarely in the teeth by successfully urging the School Board to give $1,000 bonuses to every teacher and administrator.

Ted Perry made a tasteless Facebook joke about Mitch McConnell dying and was lucky to emerge with his job. Aaron Perry was charged in an alleged domestic abuse case and gave up his job after a citizen recall effort was launched.

Virulently partisan members, especially Ann Jacobs and Mark Thomsen, of the Wisconsin Election Commission conspired to unfairly knock the Green Party and Kanye West off the Wisconsin ballot. That was only the start of it. The Commission blocked purging 130,000 people being removed from voter rolls in Wisconsin. They attempted to rewrite the recount manual. They might have gotten their way, but it was low ball tactics.

The actions of the convicted child molester in Kenosha led to the deaths of three people. His actions – pursuing and cornering teenager Kyle Rittenhouse and reaching for his gun – ignited the whole thing.

Wisconsin’s supposedly conservative state Supreme Court justice keeps insisting in glowing interviews with mainstream media outlets that he’s just following the law. But conservative justices keep interpreting the law differently, and in some of his recent decisions, he refused to rule on the law because he said claims were made too late (the most egregious of this was his decision on the Green Party). That left the non elected partisans on the Wisconsin Election Commission to essentially have the final say.

Tom Barrett presides over a city with the highest homicide numbers in its history. Property tax bills are going up. Racial disparities persist in many social areas, such as poverty, graduation rate, and lead water pipe poisonings. He has failed Milwaukee’s black community. He nominates the Fire and Police Commission, so that board’s utter dysfunction is on him. He renominated a commissioner who was part of the disastrous Morales’ demotion. He nominated a potential commissioner who literally wants to abolish the police and picked a public defender to run the Fire and Police Commission. He’s not filling police positions. Why does he keep skating responsibility for this? And we didn’t even get to the trolley…

When it comes to vile Facebook posts and alleged threats against a lieutenant, Wauwatosa’s police and inequities committee chairman is in a league all his own.

2020 started out strong for Frank Nitty due to the glowing media attention he received but ended with a sexual assault accusation, swirling questions and a lower profile after his Atlanta march.

The head of Milwaukee’s Election Commission briefly misplaced a key voting flash drive on election night and then blamed the Legislature for making her stay up for 24 hours. Hey, isn’t that her job?

As with Kovac, Milwaukee Ald. Khalif Rainey is always on the wrong side, but he also greatly upset the African-American father of an innocent homicide victim in his own district by making the man feel like he didn’t give a damn. Then he pledged to keep the father in mind when he voted on the COPS grant, but he ended up voting against it.

Biskupic, a former U.S. Attorney, delivered an outrageous decision in the case of former police officer Joseph Mensah. Essentially, he said Mensah should lose his job for a hypothetical fourth shooting that hasn’t happened yet. And might never happen. We don’t even need to explain the unfairness of that.

23. A Better Wisconsin Together

The shadowy liberal group spent a fortune to try to flip Republican Assembly and Senate seats all over Wisconsin but didn’t end up with much to show for it.

The person or people who draped a BLM over the memorial Christmas tree for a beloved police officer (who lost his life to suicide) are the worst losers of 2020. They’re rivaled by the people who stole ornaments off his tree. The officer was beloved for his work with homeless people. Despicable.

The board passed a resolution “commending” the Peoples Revolution protest/riot group. They say the organization – whose member was accused of discharging a gun at a police officer when a “protest” erupted in violence – has made the community “safer.”

He is one of the three most prolific BLM leaders. He showed up at protests, criticizing the police in inflammatory terms. Mayes is still fighting an open federal case in an alleged police precinct firebombing plot. Prosecutors say he involved children. So why are we supposed to take him seriously as a community leader?

The Wauwatosa Common Council passed a resolution that called for the removal of Wauwatosa police officer Joseph Mensah, who in the last five years has killed three people in the line of duty. The mayor signed it, which was inexcusable. Mensah was cleared in all three shootings by the DA. Clearly, they succumbed to outside political pressure by supporting the  removal of Officer Mensah from the police department, and for that, they should hold their head in shame. The mayor would have joined the Common Council as the 27th loser on this list, but he did some things right over time, such as supporting a curfew and allowing the police and National Guard to do their jobs and prevent Wauwatosa from burning.

Jacob Blake is responsible for igniting the worst riot in Wisconsin history. Blake was shot by police while they were there investigating a domestic violence call. Blake had a warrant for alleged sexual assault and refused to comply with officers’ orders. Blake attempted get enter a vehicle occupied by children when Kenosha police shot him. Blake later admitted he had a knife and a knife was recovered from the vehicle. If Blake had simply complied, the Kenosha riots would not have happened, two people would still be alive and 17 year Kyle Rittenhouse would not be charged with murder.

Former Wauwatosa Heather Kuhl enabled the Wauwatosa riots with her consistent anti-police rhetoric. She was outspoken in her stance against police officer Joseph Mensah, and pushed for his termination. Kuhl resigned after being caught using a secret Twitter account, “Vanilla Vixen,” where she often posted profane, unhinged attacks on President Trump and conservatives.

The Madison woman claimed that four white men threw lighter fluid on her and started her on fire in a bizarre incident in Madison, but, in the end, police and the FBI couldn’t find a shred of evidence to back up her claims. Police closed the case, saying in a statement, that “after an exhaustive probe, detectives were unable to corroborate or locate evidence consistent with what was reported.”