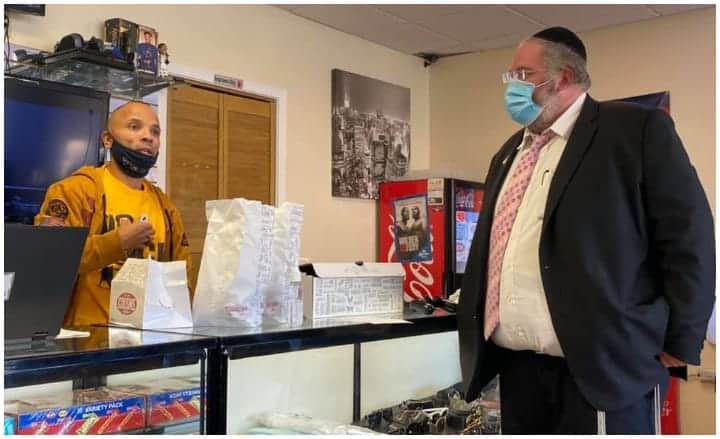 The Much Better Barbershop at 6119 West Capitol Drive was buzzing with political conversation one recent day in Milwaukee. A few days before the presidential election, several Milwaukee Republican candidates showed up, hoping to make inroads with black voters.

A few themes became immediately apparent as the discussion got off the ground, around the corner from a parking lot where people were urging Milwaukeeans to early vote.

The men gathered in the barbershop on this day defied simplistic talking points. For example, several of the African-American men in the barbershop said they do not want less law enforcement, and no one advocated against it. They don’t think it’s a good idea to abolish or defund police. “It’s a bad idea; a horrible idea,” said Waymon Stewart, a plumber. “They’re cutting it up now. If you cut police, it will be 10 times worse.”

The men do want better trained and more sensitive police, but they worry that less law enforcement will make their neighborhoods less safe and the crime rate worse. One man expressed concern that “killers out here don’t have to report,” saying that probation and parole supervision in Milwaukee has gotten laxer due to COVID-19 (see our story on such supervision going virtual here.)

The barbershop conversation occurred amidst an election season in which the Republican Party has launched new outreach into the black community, opening an office in the heart of the inner city and fielding a slate of Republican candidates, some of them black, in districts where Democrats have gotten used to having no opposition.

They stressed that small black businesses, like this barbershop, need more support from the political leadership. Several of the men have criminal histories and served time; they believe society should give people a chance to rehabilitate and become productive members of society. They’re not thrilled with Milwaukee’s street car, The Hop, either. All politics is local, the cliche goes. Never was it more true than here.

“Who uses it? It (the streetcar) doesn’t come here,” said the owner, Derrick Patterson, Jr., 32, who was most concerned with society finding ways to boost small businesses trying to prosper and survive the pandemic. Patterson, who is known as Sinn Da Barber, started his business in 2013.

Orlando Owens, a Milwaukee Republican who is running for Jason Fields’ old Assembly seat, focused on jobs when he stopped by to join in the conversation. He made a logical argument to the gathered men, trying to sell them on what he said was his ability to bring the inner city’s concerns to Republican leaders who retain the power needed to make change. He said the “R in Republican means reform.” Of the way the black community historically votes, he added, “What we’ve been doing isn’t working.” Black Milwaukeeans need leverage in Madison, he said.

“If more people get good paying jobs, the crime will address itself,” said Owens, who helped found a program called The Joseph Project that helps get people recently released from prison get jobs.

“What’s logical is the party I’m going for,” said Patterson, who was cutting hair as he weighed in. “I’m going for what’s needed.”

Republicans are tough sells to some of these men who historically voted Democratic, though. Several of the older men in the room are worried about what they believe is a rise in white supremacy or open racist talk. However, there seemed to be a generational divide on the question of Trump, with those under, say, 30, more open to the president and less locked into traditional partisan allegiance. One such younger man explained his Trump vote by saying, “He’s putting more money on the streets,” as he jumped into a waiting car and rushed away.

The barbershop was peppered with Biden/Harris signs promising “racial justice,” union jobs and health care. A big cardboard cutout of Biden and Kamala Harris was impossible to miss, but organizers said they brought that to make sure Democrats were represented in the conversation because those invited didn’t show. Asked whether they blame the local Democrats who essentially control Milwaukee for the local issues they’re concerned about, several of the men said they think that’s a problem.

Showing the generational divide, Teron Wright, 20, who works at Home Depot, says he is that rarity these days: An undecided voter. He said he might vote for Trump because he “doesn’t want to shut down the country. That’s the main thing.” He’s still not sure though, largely because his family has been urging him to vote for Biden.

Chris Buchanan, 17, who was with Wright at the barbershop, is too young to vote. He echoed Wright’s concerns, saying he plays basketball so hopes for fewer lockdowns. He said he enjoyed hearing the political views while getting his hair cut: “It was nice to hear what they had to say.”

The political conversation was the brainchild of Ramiah Whiteside. You may remember the story he was involved in years ago, when he received 25 years in prison after fleeing police and smashing into a bus stop, killing four people. In prison, he met U.S. Senator Ron Johnson, a Republican, and his team, and they invested in his rehabilitation, inside and out, he says. He got a job working as a machinist at first and helps ex-inmates try to reintegrate into society. He wants to make sure that African-American voters “have all the facts” and are exposed to multiple perspectives on politics. Whiteside is regarded by even the judge who sentenced him as a second-chance success story; Judge David Hansher even married Whiteside and wrote a letter urging his parole.

Whiteside can’t vote because he’s still on parole, but he said that he likes Trump’s “business savvy” and dislikes Biden’s past crime bill vote, but he’s not sure which candidate he prefers. He invited a host of Democratic politicians to the barbershop too, he says, but they didn’t accept.

“I can’t vote, but my people can,” Whiteside said as the rich and detailed debate unfolded in the barbershop. “It’s about unlocking the vote for all of us. This is a typical barbershop, where people come in and have these discussions. We wanted to include different perspectives. I want the conservative and liberal perspectives to both be represented so people can make an educated choice.”

Senator Johnson was going to attend the barbershop conversation but was at Trump’s rally in Green Bay instead, so he called in. He met Whiteside at the Wisconsin Resource Center Stories of Change program, and his office stayed in contact with him. People asked him questions about various issues, such as his position on inner city Milwaukee schools.

“I am a huge proponent of school choice,” said Johnson. The senator also said that “when people have paid their full debt to society… I have no problem in their full rights being restored. That’s only fair.” He spoke about the “economic progress” among all demographics in the Trump administration before the pandemic hit.

Even the older gentleman in the barbershop this day said they like some things Trump and Milwaukee Republicans have to offer, though. They were open to listening, although not completely sold. Some didn’t find the president trustworthy or were concerned by his rhetoric, which ameliorated the things they like about him. “Our current president is wild,” said Stewart. He said Trump “rubs me wrong” and could have handled the pandemic better.

His relative, Sean Stewart, 49, doesn’t like Democratic tax policies, though, showing the independence of thought among these men, whose positions are not easy to peg when you ask about them. He believes if you “work from the ground up” and make money, it shouldn’t be taken from you. “Everyone should pay the same taxes,” he said.

These types of attitudes show why Milwaukee Republican candidates are hoping they might find some open minds despite black voters’ deep historical ties to Democrats.

Earl Graham, 31, a barber, said he voted for Biden. He said he used to like Trump, but he said too many things that left a “bad taste” in his mouth, such as his comment about the Proud Boys in a debate. He likes that Trump is a businessman. He said he didn’t know a lot about Biden, other than he served with Barack Obama and lost loved ones in a long-ago car crash. He does worry that Biden is “softer” than Trump and how that will play with rogue states like North Korea.

But in the end those debate comments proved too much for the president to get his vote.

The white supremacy concerns were echoed by others. One man said he has to go up north for job training to a small town right after the election and is concerned how he will be treated if Trump loses.

One of the candidates who stopped by was Abie Eisenbach. He told the men how his parents ran a kosher supermarket for years nearby. Eisenbach, a board member of the Sherman Park Community Association, is a Milwaukee Republican vying for the 17th Assembly District. He’s also an auxiliary officer at MPD’s 7th district and committee president of the security board of Yeshiva Elementary School.

“I’m a Jewish guy,” Eisenbach told the men. “Jews, we have had our own struggles. Black people have had their own stories.” He said he enjoyed the conversations in the barbershop because he wants to “understand better” which issues concern people. He promised to continue “speaking to people” if he wins. He is running against Supreme Moore Omokunde, a Democratic Milwaukee County supervisor who is the son of U.S. Rep. Gwen Moore.

Eisenbach described how he’s been able to convince some traditional Democrats to vote for him when they said they’d never vote for a Republican simply by reaching out and having conversations about what he stands for as a candidate.

“We need to help our small businesses in Milwaukee,” he said. “We need to invest in our city.”